Ride Entertainment, a leader in the supply and installation of some of the world’s most thrilling attractions, installed two indoor rollercoasters ahead of the opening of Nickelodeon Universe at American Dream.

Ride Entertainment is pleased to have supplied and installed two indoor coasters for the highly-anticipated Nickelodeon Universe amusement park, which opened to the public at the new American Dream mall in New Jersey on 25 October.

Nickelodeon Universe is the first attraction to open at the giant retail and entertainment complex and is home to two thrilling indoor roller coasters – TMNT Shellraiser (Launched Euro-Fighter) and Shredder (Spinning Coaster). 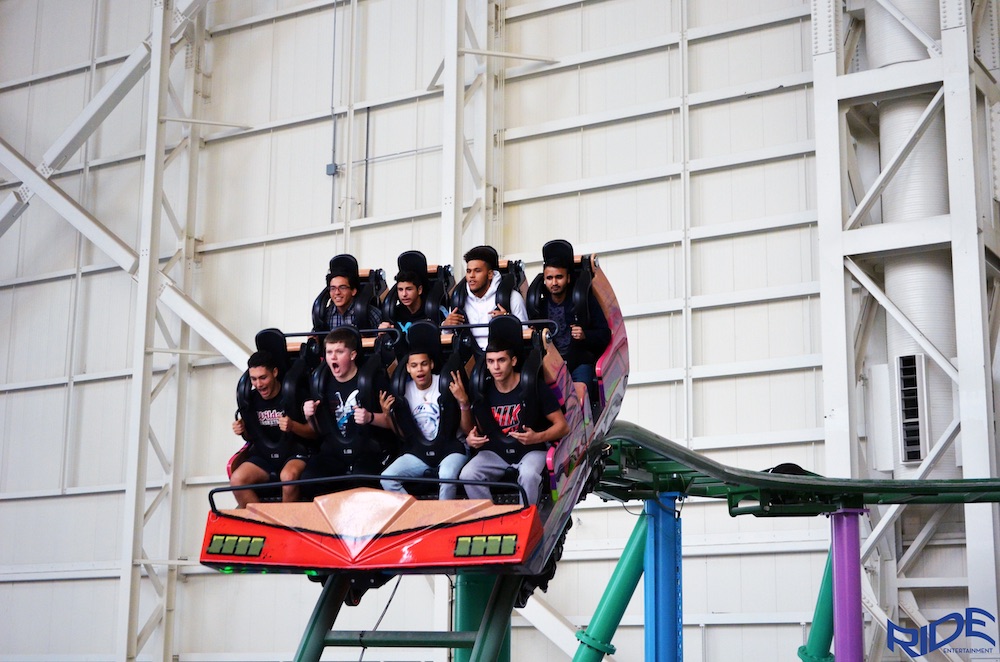 The biggest of the two rides, TMNT Shellraiser, features the world’s steepest roller coaster drop, at 122 degrees. Riders are held at the edge of this dramatic drop in a glass and steel pop-up, where they get a brief glimpse at the Manhattan skyline before plummeting 12 storeys down. It also includes a 62 mph (100 km/h) LSM launch, 7 inversions and a 141-ft. (43 m) vertical lift

The other ride, Shredder, is a record-breaking Spinning Coaster that weaves in and around Shellraiser. It is the tallest and longest full-circuit, free-spinning coaster in the world, reaching a height of 85 ft. (28 m) and a top speed of 36 mph (57 km/h). Both rides were designed and manufactured by Gerstlauer Amusement Rides.

“Everyone at Gerstlauer Amusement Rides is thrilled about the opening of Nickelodeon Universe in American Dream. We appreciate Triple Five giving us the opportunity to showcase roller coasters that featured firsts and record-breaking statistics. The added fun of having the Spinning Coaster weave through the Launched Euro-Fighter makes this experience truly world-class,” says Siegfried Gerstlauer, Managing Director.

“It was such an honour to be chosen for this project,” says Adam Sandy, President of Business Development for Ride Entertainment. “We want to thank Triple Five and the Ghermezian family for choosing us to supply their marquee coasters. In addition, thank you to Nickelodeon for working with us so we could bring the experiences of their brands to life.” 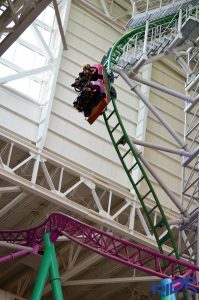 KCL Engineering was chosen to light TMNT Shellraiser, as well as another coaster. On Shellraiser, a strip of LEDs runs between the ride’s reverse direction, giving riders the impression that they are accelerating even faster.

At night, the LED lighting systems integrated into the track and at the base of the lift tower transform the experience. The lighting concept also reflects the four colours of each TMNT.

“We raised the stakes at Nickelodeon Universe with our first indoor lighting system on Shellraiser and Sandy’s Blasting Bronco,” says Kris Kunze, Founder and Managing Principal of KCL Engineering.  “And in its world debut, a KCL Light Launch on Shellraiser takes lift-off to a whole new level.

“A big hats-off to the KCL programming team who created intense new launch effects on Shellraiser while brilliantly applying KCL’s signature ‘chase’ to follow multiple cars simultaneously. These are visuals found nowhere else in the world and we are honoured to be part of Triple Five’s monumental entertainment achievements at American Dream.”

Due to the scope of the two rides, Gerstlauer Amusement Rides chose Ride Entertainment’s Installation Team to provide technical assistance

“When we first got here, we started the commissioning process, doing test cycles with the vehicles,” says Amanda Mercado, Project Director of Ride Entertainment’s Installation Division. “We then moved into omission of the launch system, fine-tuning of the vehicles, wheel adjustments and mechanical inspections.”

Nickelodeon Universe is the first attraction to open at American Dream, with a waterpark, ski park and retail experiences to follow.