The trend for fitness-inspired events at theme parks continues with a new running event for Shanghai Disney Resort – Disney Inspiration Run – co-hosted by the theme park and the Shanghai International Marathon.

The first-ever Disney Inspiration Run at Shanghai Disney Resort takes place on the weekend of September 15/16. Registration will open at 10am on July 2nd. The event is set to feature three courses of varying lengths – 3.5km, 5km and 10km, allowing runners of all ages and levels of fitness to participate.

The 3.5 km and 5 km runs will be held on Saturday while the 10 km run will take place on the Sunday.

The run is being co-hosted by Shanghai Disney Resort and the Shanghai International Marathon, and organised by the Shanghai Donghao Lansheng Event Management Company Limited.

The first 50 male and female participants to cross the 5 km and 10 km finishing line will gain automatic entry into the Mini Marathon and 10 km events at the 2018 Shanghai International Marathon.

Running events are already popular at other Disney theme parks.  Themed runs include a Disney Princess Half Marathon and perhaps the more appealing Disney Wine & Dine Half Marathon Weekend.

All three courses have been carefully designed to take runners through stunning areas of Shanghai Disney Resort – Shanghai Disneyland, Disneytown and Wishing Star Park. Music and entertainment will accompany the runners and Disney characters will spur on participants. The short 3.5 km run is open to runners as young as five years (anyone under 16 must be accompanied by an adult), taking a route down Mickey Avenue, through the Gardens of Imagination and past the Enchanted Storybook Castle. The finishing line is sited next to Wishing Star Lake.

The 5km and 10km runs are open to those over the age of 16. The 10km course, aimed at serious runners, takes participants through Disneytown, Mickey Avenue, Tomorrowland, Disney•Pixar Toy Story Land, Fantasyland, Treasure Cove, Adventure Isle and the Gardens of Imagination, before ending with a circuit around Wishing Star Lake.

All runners will receive a commemorative t-shirt featuring Mickey, Donald or Pluto.

Fitness is key trend in travel 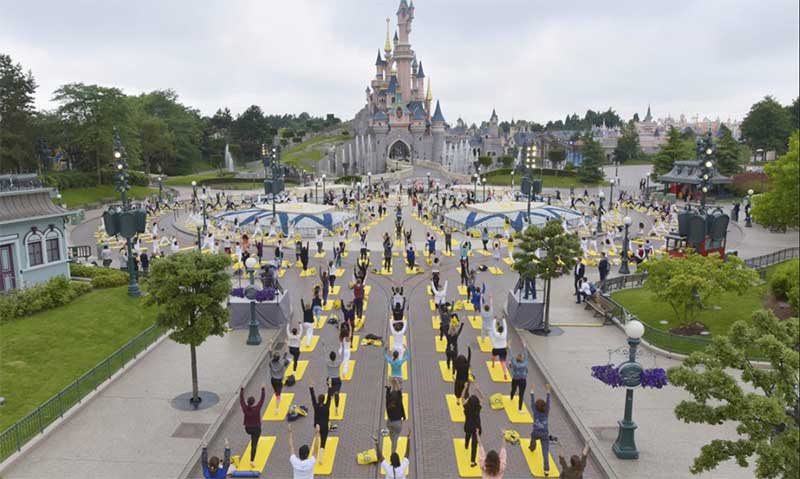 As Blooloop reported yesterday, sports tourism is enjoying a huge surge in popularity in China.  Marathons are increasingly seen as a key way to attract runners and visitors to host cities and attractions.

However it’s not just running that is drawing fitness fans to theme parks. Disneyland Paris hosted a massive yoga class with 700 participants at the foot of Sleeping Beauty Castle on June 21st – International Yoga Day. Spaces were booked within 24 hours of online registration opening.