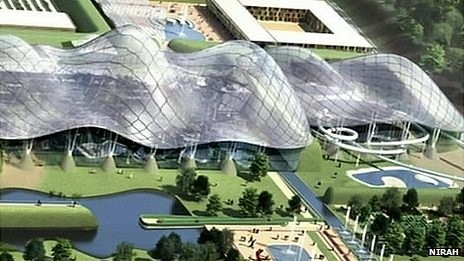 We read on the Blooloop website recently that the planning permission for NIRAH, the massive fresh water aquarium attraction planned for Bedfordshire, has expired with several million pounds of public money having been invested in it.

Bedford Borough and Central Beds councils are owed at least A?1.6m, while central government is owed more than A?3.5m. Back in 2012, a report from the BBC described the project, which by then had a price tag of A?600 million, as “dead in the water’ and noted that land ownership issues, which ended up in the High Court, were never resolved. Indeed, even back in 2009, Council bosses admitted that they felt “left in the dark’ and were “deeply concerned” about plans. Perhaps they should have stepped in then or were they all in too deep?

Out of A?3 million of public money identified in 2012, A?400, 000 was paid to Directors, A?1.2 million in professional fees and consultants fees (including A?100, 000 in PR), and A?1.1 million in costs relating to planning applications. That left a balance of A?300, 000, not to mention that small question of the fact that we now know that including accumulated interest, A?3.5 million is owed to government, plus the sum of A?1.6 million owed to the local councils.

The local MP, Nadine Dorries has called for an “explanation of the matter’, which I would have thought is the very least that could be expected. Maybe there should be an enquiry into the use of public funds. How on earth did these local and national government authorities ever think that this was a viable project? What kind of feasibility studies convinced them that it was viable and who was responsible? How did the project consume so much money over the years with nothing to show for it? Were no lessons learnt following the failure of Millennium projects such as the Centre for Popular Music in Sheffield and the Earth Centre in Doncaster?

Whilst often it seems that deserving, sustainable and well-supported smaller projects fail to gain the support that they need, the larger and more eye catching projects which promise so much gain support from local and national government , almost irrespective of the economic case, the strength and suitability of the concept or the experience and credibility of the promoters.