Opened in 2012 as Malaysia’s first international theme park it is now flanked by a waterpark and a 250-room hotel thus the name “resort’.

Well, to call it resort is a bit of a stretch. The complex is surrounded by construction works in the middle of nowhere, about 25km from Johor Bahru town centre; not really what I would call a resort location!

OK, enough negativism for this introduction; but I had to share this first impression I had when I got there (by public bus, that’s another story I will spare you); I was a bit scared I must admit. In fact, I had a good time and let me tell you why. I will start by stating the obvious: it is an international theme park. And that in itself is quite a draw in Malaysia where, despite being one of the most developed country in the region, the level of quality (and maintenance) is not always up to expectations. I had purchased my ticket online the day before (USD 45), which is quite high for Malaysia. Of course no discounts available the day before; Merlin Entertainments know their revenue management! I thought I could use the barcode on my mobile but that was not the case so I had to go to the ticketing counter first to redeem my ticket. Thankfully there was no queue.

Speaking of it; I must admit I was surprised by how quiet the park was for a Sunday, during School Holidays and just after the opening of Star Wars Miniland (supported by an advertising campaign). I would say at least 30% of the visitors where from Australia or the US and looked like theme park regulars (maybe living in Singapore), and the rest were Malaysian families with young children.

I started my visit naturally walking around the circular path, which would take me from Lego City to Land of Adventure, Imagination, Lego Kingdoms and finally Lego Technic. Visitor flow and signage are very well done; it’s impossible to miss any attraction. Also, I thought there was just the right amount of food & beverage kiosks and redemption games along the way, creating a nice sense of happening without being overwhelming.

Although I did not have food at the park I had a look at all their outlets and they looked appetizing as well as clean and well maintained. The choice of food is mostly

international with only one Asian outlet. I wonder why they made this choice? I would have expected more demand for Asian food.

I was very impressed by the attention to details in the theming and the landscape; the park is full of surprises and funny things such as an old man snoring on a bench! It makes it fun and creates the magic that one would expect from a theme park. 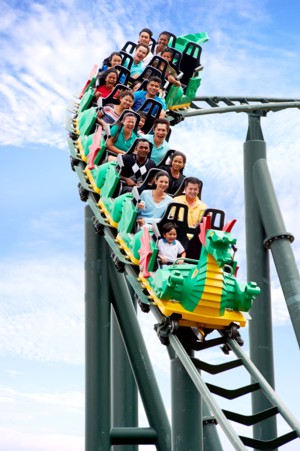 The best ride is by far The Dragon, which is the main roller coaster of the park and boasts a nicely themed queuing area (inside the Lego castle) and dark area at the beginning of the coaster. Maybank is the ride sponsor and I found the brand integration very well done (Maybank logo is turned into a coat of arms). The same goes with the other park’s sponsors (Nissan, Coca Cola, Ribena, Walls, Canon), which are well taken care of.

On the down side of the product I would list the number of kids playgrounds (maybe 4 or 5), which present not particular interest and as such remained empty. It feels like they serve as fillers but don’t add much to the visitor’s experience.

The staff were all very nice and helpful; they were everywhere you would expected them to be and engaging visitors, especially kids. Knowing how difficult service training can be in Malaysia I have to take my hat off for the management of the park! Now, Star Wars Miniland. This new addition to the park, reported to have cost USD 2million, is a series of 6 rooms each housing a giant Lego display inspired by the Star Wars video produced by Lego. Great displays if you’re a Star Wars fan but in my opinion a bit repetitive and not very interactive. If you don’t plan to go but still want to have a look you may watch this video I shot:

My final attraction before leaving the park was the Miniland at the centre of the park. 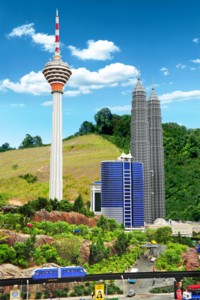 Inspired by different locations in Malaysia and Asia, these scenes are very well done and certainly a treat for all Lego fans out there. Unfortunately the tropical Malaysian weather hasn’t been too nice with them and they start aging. I wouldn’t be surprised if the park replaced them by something else in the future.

Verdict? A very pleasant international theme park ‘ and I insist on “theme” as the Lego theming is one of the highlights of the park ‘ but very targeted towards young children and maybe more enjoyable for non-Asian children (food offering, hands-on activities). Not convinced by the product extension trying to cater to an older crowd (Star Wars Miniland). Not sure about the return visitors rate either. For me it was not so much the heat or the lack of shade (actually I thought it was fine and most people I saw seemed fine as well) but the lack of shows and the remote location that would keep me from visiting again.