WhiteWater is pleased to announce its latest record-breaking installation of the Spinning Rapids Fusion water ride. Lava Drifting opened in May 2019 at Shanghai Haichang Ocean Park and boasts a number of firsts. It is the world’s first spinning rapids ride with actual rapid rivers. Lava drifting is also the longest spinning rapids ride of anywhere in the world.

Lava Drifting was included from the first park concept created by Legacy Entertainment in 2013. The exciting ride features a volcano theme, while riders enjoy the spins, twists and turns of a river rapids journey, finishing with oscillating movements and a steep drop from the wings of a Manta. Lava Drifting is around 1-kilometre long. It differs from the traditional Spinning Rapids Ride with the inclusion of conveyor lifts, tunnels, multiple drops and actual rapid rivers. It takes visitors on an immersive journey through the park and around other attractions. The 11-minute ride includes elevated river channels coming in and out of the ride flume, with several elevation points before the final steep drop.

The preliminary layout for the ride was developed by Legacy Entertainment’s experience designer Bob Baranick. Speaking about the collaboration, Taylor Jeffs, Legacy’s President & Chief Creative Officer says, “I have been a huge fan of this ride system since first riding L’oxygénarium at Parc Astérix in 2002, so it is a great pleasure to collaborate with WhiteWater on the most ambitious incarnation of this type of water ride ever conceived.”

“Legacy always puts a great deal of value on the integration of attractions into their environments, and as such, the ride path has been carefully woven through the Rainbow Falls section of the park, including a climax in the park’s iconic volcano. This symbiotic relationship is instrumental in activating the land,” adds Taylor. 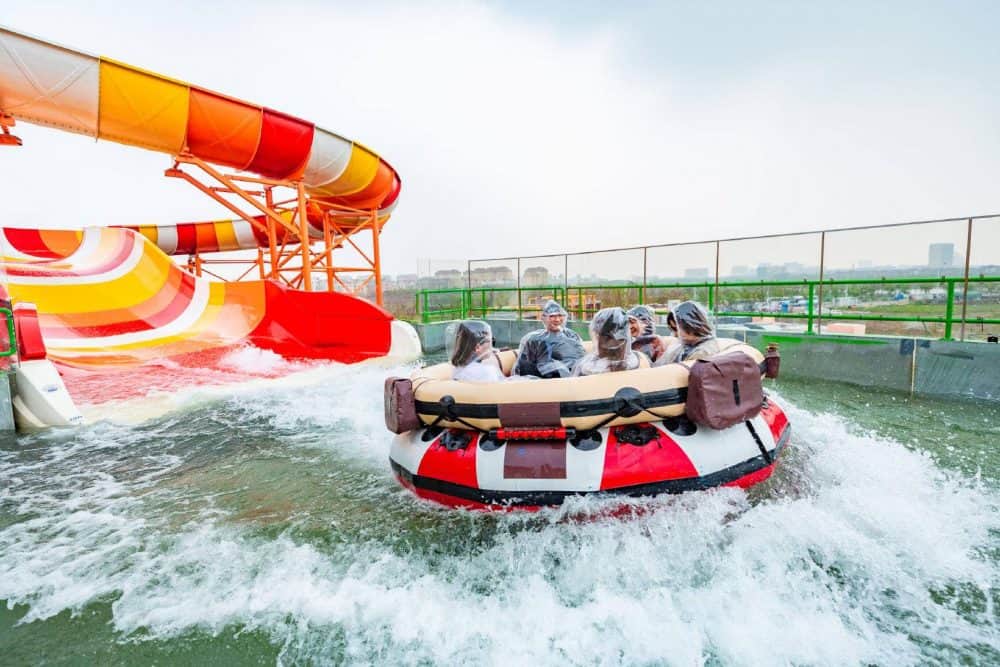 This project was undertaken by 40 people at WhiteWater with various responsibilities ranging from product development, engineering, design and slide path. This team seamlessly collaborated with the client, the Legacy Entertainment team behind the park layout, Cogito Automation who provided the control system and Van Stone who provided the conveyor system.

Paul Chutter, Chief Business Development Officer at WhiteWater says, “In many ways, this ride represents the best of industry collaborations to deliver on the client’s ambitious visions. Working to realise Legacy’s concept and bringing in additional skill sets to compliment our engineering and manufacturing, we’ve created a ride which delivers in every way. Guests enjoy the longest rapids journey in the world which concludes with a first-ever Manta as part of a ‘dry’ ride and Haichang Ocean Park get a feat of engineering talents meeting WhiteWater’s high safety and reliability standards.”

WhiteWater also has several projects coming up including Vinpearl in Vietnam, Aqean Bay in the Philippines, Ocean Park in Hong Kong and three STCs in China for Evergrande Group. It will also be providing two more Spinning Rapids Rides in China, one in Wanda Guangzhou and the other in Wanda Wuxi.

The company recently announced it has exclusive rights to the award-winning SlideWheel and has welcomed Rainer Maezler to the team.