Here’s those four rides in full:

This new innovation from the Italian manufacturer’s roller coaster division catapults passengers through a series of surprises. Keeping guests guessing throughout the ride, the steel coaster promises such elements as a soft launch, backwards switch and drop down effect. A 16-passenger, two-car ride vehicle comes equipped with a lap restraint and a minimum height requirement of 1.05m (41”).

Thrill seekers won’t have long to wait to sample the first Factory Coaster. The first version will open in the second half of 2019 at Wuxi Sunac Land in China’s Jiangsu Province.

It will feature 611 metres of track and a top speed of 52 km/h. The theoretical hourly capacity will be 1,100, using seven ride vehicles,

Zamperla has taken its Air Race ride to new heights with this crowd-stopping new version. The attraction boasts a 23m (75ft) footprint and features the same acrobatic manoeuvres as the original. However, it adds a lifting motion that elevates the entire attraction by 7 metres. 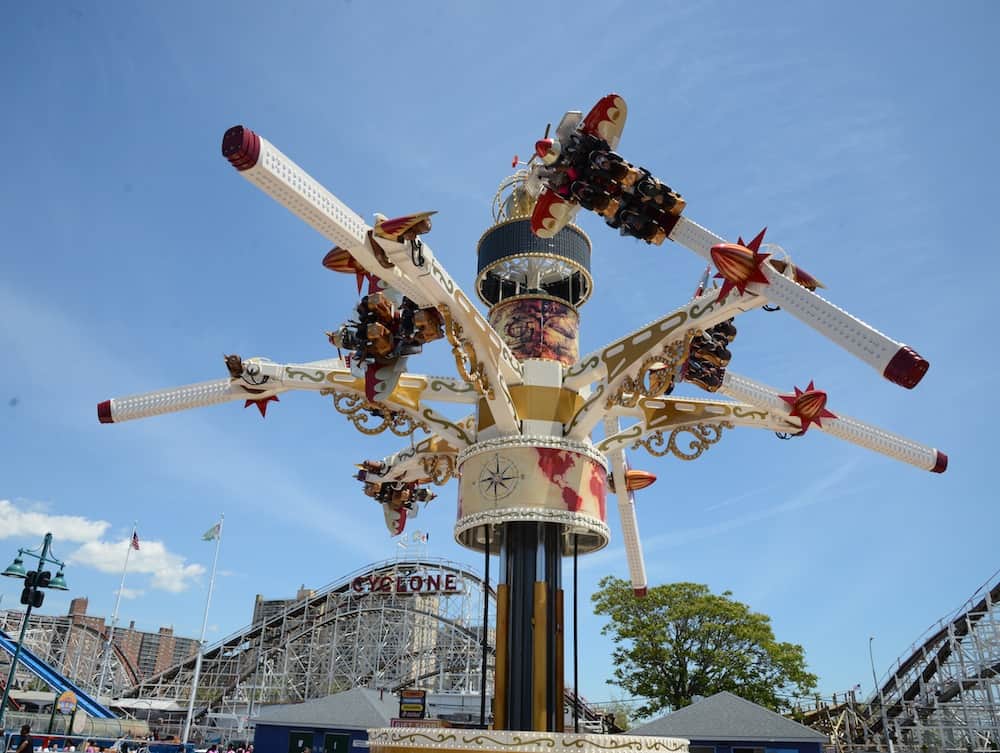 A total of 24 passengers bank, loop, dive and roll up to a maximum height of 14.7m (48ft). The thrill ride combines a 6rpm central rotation with a six motor-driven arms, each with a four-seater plane on one end.

Passengers experience an adrenaline-pumping combination of acceleration and weightlessness. The movement, combined with a nice lighting package, create an eye-catching addition to any midway.

At first sight, this new ride looks similar toAir Race. However its motion is described as a “visual riddle that is as much fun to watch as it is to ride.”

Four arms rotate around a horizontal axis in fast inter-meshing orbits, while the central column rotates. The eight twin-seat gondolas, one on each end of the arms, always remain upright. Riders catch airtime as they fly over the top of the attraction and other ride vehicles.

The arms are synchronised by a redundant central gearing system. This means that, although they appear almost as if there are to collide, they never do and are always perfectly intertwined. And thanks to the close proximity of the arms to the centre, the ride has a much tighter footprint than the Air Race, just 11.8 x 11m.

The latest addition to Zamperla’s collection of tower rides is now open at Särkäniemmi in Tampere, Finland. The park has chosen the name Boom for the attraction.

Different to other rides of its kind, the full column rotates, at a speed of 2.5rpm. This gives its 16 passengers a panoramic view of the park’s lakeside surroundings as they shoot and bounce up the 68m (223ft) tower.

Back on Zamperla’s home turf, progress continues on the farm-themed family entertainment centre the company will operate at FICO Eataly World in Bologna. Scheduled to open in autumn 2019, it will feature 12 rides.

In total, the prolific manufacturer will deliver more than 200 rides around the world this year. This is consistent with its output 2018.