WhiteWater, a leading waterpark manufacturer, has announced the opening of Adventure Bay in Xiangyang, China, its latest collaboration with OCT Group.

WhiteWater is pleased to announce the opening of another successful collaboration with OCT Group, Adventure Bay in Xiangyang, China, which is home to the world’s first Orbiter water slide as well as many other popular WhiteWater attractions.

Adventure Bay is part of the FABLAND leisure resort, which consists of three parks and a tourist town. WhiteWater has worked with OCT Group on 14 previous projects at 10 water parks in the country and the two companies have a strong track record in creating crowd-pleasing attractions.

Adventure Bay, which opened this summer, has already been entertaining guests with a range of WhiteWater favourites, like the FusionFortress 10, Wave River, Extreme River and a Double Wave Pool. There is also a collection of fun water slides such as an AquaSphere + Python Fusion, Dueling Master Blasters, and two speed slides. However, the world’s first Orbiter is the ride that has people talking. 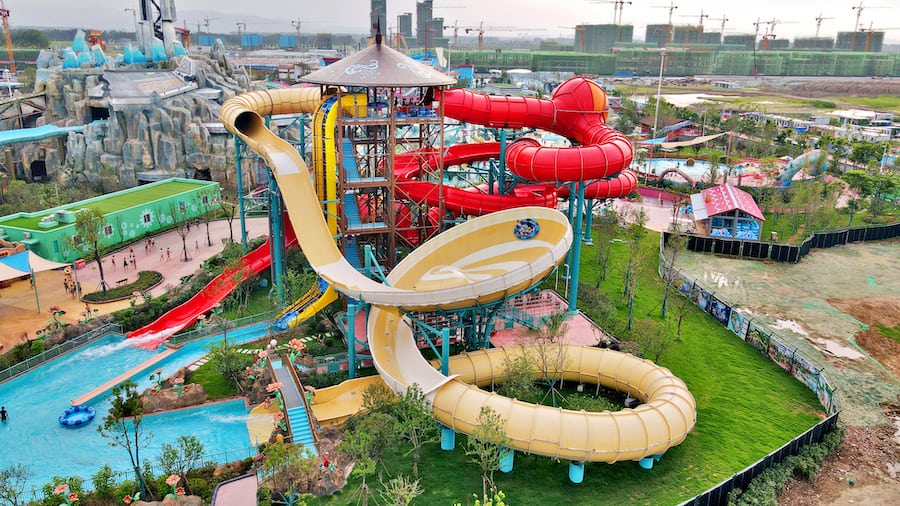 “We are delighted that the world’s first Orbiter was launched at Adventure Bay, where we have called it ‘Turbo Shuttle’,” says Li Xu, Adventure Bay’s Marketing Director.

“Our guests love it, it’s exciting, fresh, and fun, and it’s an unprecedented experience to ride on a raft inside it. The guests queuing in line are even more eager to try it when hearing the screams of the riders. Although the park is recently opened, ‘Turbo Shuttle’ has become one of the stars of the entire water park.”

Orbiter was recognised with an IAAPA Brass Ring award in 2018 in the Best New Product Concept category. The innovative family raft ride is the first of its kind to feature a 360-degree ascending loop as has two high-speed acceleration features with the first-ever open twisted-drop entry.

“It was a great honour to work with OCT again on building another larger than life water park,” says Phil Zhong, WhiteWater’s Chief Operating Officer – Asia. “Adventure Bay at OCT FABLAND is a unique park for several reasons, but the gem of the park has to be their Orbiter.

“OCT understands how to build successful water parks, which is why they turn to WhiteWater for innovative, crowd-pleasing, and safe attractions time and again.”

Earlier this year, WhiteWater unveiled its innovative Endless Surf inland surf pool technology, which will be used at a new €250 million development, La Vague Grand Paris. The company will also be exhibiting at IAAPA Virtual Expo: Asia from 28 – 30 July.