The new Apple Park Visitor Center is now open at the computer giant’s campus in Cupertino, California. Designed by the British architectire and design firm Foster + Partners, the visitor center is the public face of Apple’s vast new headquarters.

Features of the independent building, which is styled as a “uniquely designed architectural extension” of the new headquarters complex, include an exhibtion, a roof terrace, a shop and a cafe.

As per Apple’s products, design is to the fore. “With similar aesthetics in staircases, stone walls, and terrazzo floors,” the center’s “cantilevered carbon fiber roof appears to float,” says Apple. The roof is supported “by stone clad cores and no other extraneous columns for support.” 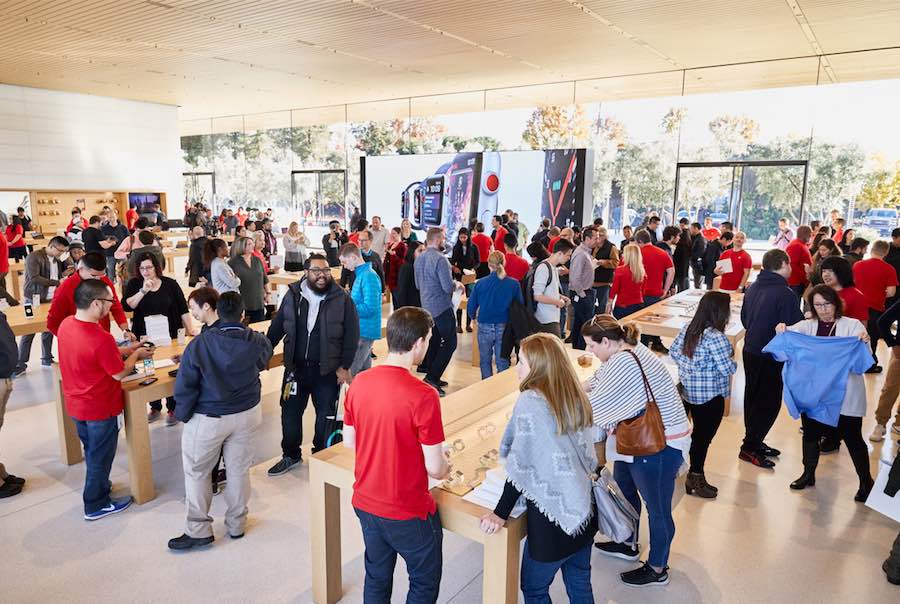 Visitors can also go upstairs to the roof terrace for beautiful views of the main building. They can also see some of the 9,000 native and drought resistant trees in the grounds. On the first floor guests can visit the cafe, which is surrounded by olive trees. Furthermore the visitor centre’s shop stocks Apple’s full range of products together with exclusive Apple and Apple Park branded merchandise.

Apple says the purpose of the building is to invite “guests to explore Apple Park in an immersive and engaging way.” Like the main headquarter building itself, it is designed by renowned British architect Foster + Partners.

A three-dimensional model of the campus is “brought to life using augmented reality (AR) technology”. Visitors are able to learn about the visitor center, it’s function, and the company itself. They can also lift the entire roof off the (virtual) building for a glimpse inside the collaborative office pod layout.

Apple Park opened in April 2017.  It replaced the original Apple headquarters at 1 Infinite Loop.  The new site houses more than 12,000 employees. Founder Steve Jobs wanted the campus to look more like a nature reserve than an office park so eighty per cent of the site is green space.

Back in September Apple had showcased its architect-friendly ARKit augmented reality technology. They had also revealed the spectacular and brand new Steve Jobs Theater.