The Metropolitan Museum of Art, NY, has announced that Heavenly Bodies: Fashion and the Catholic Imagination has become the museum’s most visited exhibition, attracting over 1.5 million visitors. 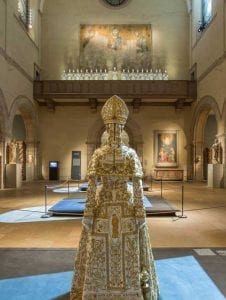 1,659,647 people visited The Met Fifth Avenue and The Met Cloisters during the exhibition’s run from May 10 to October 8. It overtook Treasures of Tutankhamun (1978) to become the most visited exhibition, which had 1,360,957 visitors.

In July, The Met announced record attendance of more than 7.35 million visitors across its three locations—The Met Fifth Avenue, The Met Cloisters, and The Met Breuer.

The Costume Institute at The Met

Heavenly Bodies is the largest exhibition that both The Costume Institute and The Met has ever organised. It covered 60,000 square feet over 25 galleries.

Describing the exhibition, a statement said: “The thematic exhibition presented a dialogue between fashion and masterworks of medieval art in The Met collection to examine fashion’s ongoing engagement with the traditions of Catholicism.

“A group of papal robes and accessories from the Vatican served as the cornerstone of the exhibition, highlighting the enduring influence of liturgical vestments on designers. The 42 ecclesiastical masterworks came from the Sistine Chapel sacristy, and many of them had never been seen outside the Vatican.”

Images and video courtesy The Met