The technical wizardry that ‘puts guests into the show’ is down to leading interactive attractions specialist, Triotech.

To find out more, Blooloop spoke to Patrick Hughes (right), President and CEO of the Fremont Street Experience, and Christian Martin, VP of Marketing at Triotech.

Patrick Hughes is a native Dubliner with a background in casino gaming. He came to Las Vegas 21 years ago and has been with the Fremont Street Experience for around eighteen months.

Non-gambling revenue is at its highest ever

“People come here to enjoy themselves,” he says of Las Vegas. “They come here to have fun. That’s what the city was built upon. And, that’s why the percentage of revenue being spent on experiences other than gambling is at its highest rate ever, and growing.”

The Fremont Street Experience spans six blocks in downtown Las Vegas and is the most visited street area destination in the city.

“According to 2016’s visitor profiles study, 53 percent of the 42 million people who visited Las Vegas in 2016 came down the Street at some stage during their trip,” says Hughes.

“Our function here is to create the events and attractions, to manage the six city blocks on behalf of the city, and to continue and improve the visitation to benefit the downtown area.”

The area is also home to the Mob Museum, just two blocks north of Fremont Street. 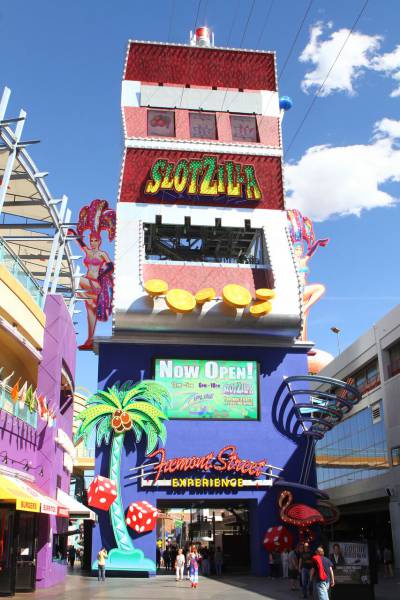 “It’s an incredible visual,” says Hughes. “Just under 500,000 people rode SlotZilla last year. Incredible numbers. And, we are on track to more than double that this year.”

The centrepiece of the Fremont Street Experience is Viva Vision, the world’s largest LED screen, created in 1996.

“That’s the anchor,” says Hughes. “It’s 1,500 feet in length, and sits above the pedestrianised mall. It showed incredible foresight on the part of those city leaders back then to create such an attraction, something nobody had ever seen before.

“We are in the midst of plans to renovate and upgrade it, both in terms of resolution and content. The expectation of today’s consumers is a hell of a lot more than just looking at a screen. Interacting with the screen – that will be the most unique element going forward.”

At present guests enjoy a variety of light shows. Each show lasts approximately six minutes and runs every hour. Acts include Heart, Green Day, The Who, Imagine Dragons, Tiesto and more.

“Our goal, from New Year of next year, will be to have the audience dictate what show occurs when. The idea is that cell phones will be that conduit. Everyone’s got a cell phone, and we’ve got a screen. We just need to connect the two. Simple as that.”

Advances in the attractions industry are increasingly driven by customer expectation. “Our job is to exceed that expectation,” says Hughes. “Part of our mantra with the Fremont Street Experience is to create unexpected experiences.”

One such attraction is the Fear of the Walking Dead Survival experience. “We have been working with Triotech for the last year. On August 29th, we opened this new attraction up to the public. It has been incredibly successful so far.”

The decision to create the attraction stemmed from a cold call make by Triotech Vice President, Vincent Brie.

“He came knocking on my door, and asked if we had any available space,” explains Hughes.

“I showed him what had been, literally, a dirt space, for the last 20 years. At that point he was working on establishing the rights with AMC. He was looking at a number of locations around the country but, with our traffic here, it was a no-brainer. It’s a massive opportunity for anyone who can get onto the Street.”

Triotech and Hughes started working together. “I got the approval of the board of directors to invest in building up the space to a vanilla shell. Meanwhile Triotech licensed with AMC. They created and built Fear the Walking Dead Survival out in Montreal before dismantling and shipping it down here to install it.

“It was natural for us to be the operator, since we have the infrastructure right here.”

An attraction packed with unique features

The attraction’s reception has, in the weeks since opening, been universally positive. “It’s a challenge to describe it,” he admits. “There are so many unique features to Fear the Walking Dead Survival. It’s part maze, part escape room, part attraction, part dark ride, part thrill ride. Possibly our biggest problem is getting the message across so people clearly understand exactly what is in here.”

Of course, the power of the IP will draw people in regardless. “It is the success of the series worldwide that is going to make this into a destination. People will make a point of coming down here because of their affiliation with the brand.”

Hughes is quite clear that the attraction’s unique features are down to Triotech’s expertise. “Triotech are the leaders within the industry on motion rides, and the integration of the motion ride with 3D and VR. That is their primary specialty.”

There is one element that has particularly impressed him. 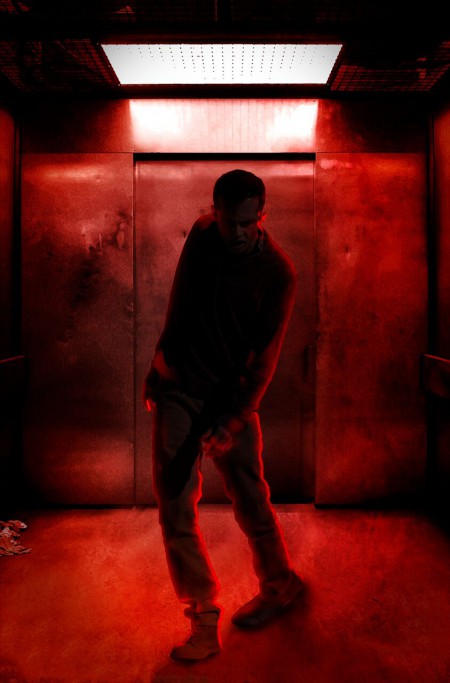 “Within the attraction itself is an elevator that absolutely makes you believe you are being moved between floors in the building. But, it doesn’t go anywhere. You really do actually believe. I’ve got to tell you right now, I don’t think anyone even knows that they haven’t moved.

“This feature is an example of Triotech’s brilliance. The incorporation of multiple dimensions – eg. smell, sensations such as wind, and movement in the elevator – creates the conviction that you have moved from one floor to another. People may not appreciate it, because they think it’s just an elevator.”

The experience finishes with a motion ride. “The lasting memory for our guests is the dark ride,” he says. “All hell breaks loose and you are evacuated onto the back of an army truck. You sit on the benches with your 3D glasses and your gun. The canvas comes up at the back of the truck, the screen unveils, and then you’re shooting at the zombies – the ‘walkers’ – that are coming at you.”

Strong storytelling plus action and thrill

Christian Martin, VP of Triotech, takes up the story. The Montreal-based company has been pushing the limits of interactive media-based attractions since its foundation in 1999. In 2006, Triotech opened its own studio to develop state-of-the-art custom content for attractions worldwide.

Martin explains how the idea for Fear the Waking Dead Survival came about. “The idea was to design an attraction that was unique. It had to be anchored on an intellectual property that would resonate with the public,” he says.

“Fear the Walking Dead is characterised by strong storytelling elements as well as action and thrill. These are also the key elements that make a top-notch attraction. Therefore, Triotech thought this would make a superb basis for its next design.

“The process always hinged on creating an experience that would put guests “in the show”, as if they were cast in that world. It is important to realise that Fear the Walking Dead is set at the onset of the zombie apocalypse. Therefore a lot of mystery, uncertainty, and psychology elements come into play and influence the characters’ choices.

“Our objective was to replicate this atmosphere.”

The design of Fear the Walking Dead Survival was key. “We chose to sub-divide the experience into zones,” he says.

“Each zone has its own situation and psychological signature: Expectation, Unknown, Stress, Threat, Danger, Fear, Fight and Escape. Taking this into consideration it became evident that a crescendo approach would be best.”

The build itself presented a number of interesting challenges. “It is truly a first-of-its-kind attraction,” he explains. “So, there were a lot of unknown elements surrounding the build, especially in terms of effects and flow.”

In order to ensure an optimised build, Triotech decided to construct the attraction in Montreal in a warehouse next to the company’s design office and studio. “This proximity helped the development and optimization of the experience,” says Martin. “The proximity to the creative team, the engineering group, the software specialists and all those involved in a design of this magnitude allowed major adjustments as well as fine tuning of details. It also made it easier to adjust the experience after focus groups were run through the attraction.”

Triotech provided the complete experience, from design to the installation.

Fear the Walking Dead Survival is an innovation. “It is a walkthrough attraction that also involves interactivity, and is strong enough to be open all year round,” says Martin.

This immediately sets it apart from the majority of walkthrough type attractions, most of which are seasonal. “Several are only opened during Halloween season,” he says. “The main reason for this is the high cost and performance management issues related to the high number of actors. In the case of Fear the Walking Dead Survival, Triotech designed an experience where technology, design, and interactivity take over to create the experience.”

Throughput was a particular challenge

Throughput was one of the main factors that needed to be taken into consideration. Groups of twelve guests commence the experience at any one time. The show itself lasts around 22 minutes, including pre-show. New groups go in every five minutes, and tickets are sold in 20-minute windows so waiting times are minimised.

“Triotech has developed sophisticated tools to preview the attractions it designs,” says Martin. “This works well when ride vehicles are involved. However, in a walkthrough attraction, guests can walk ‘anywhere’ and at their own pace. This was the main challenge. We needed to ensure throughput alongside a great guest experience despite not having 100 percent control on where the guests are. We overcame this by mixing technology, design, and human intervention.”

Staying true to the IP

Martin says it was vital to stay faithful to the intellectual property. “This factor is important and was carried through thanks to a close collaboration between Triotech’s creative team and AMC.”

It wasn’t just the set that went through a rigorous review and approval process. The live actors were also subject to deep scrutiny. “This included instruction and feedback on the look and behaviour of the walkers themselves,” says Martin.

A whole range of technologies was used in Fear the Walking Dead Survival. “We incorporated various technologies from different concepts such as simulation rides, interactive attractions, escape rooms, and mazes,” says Martin.

“We used what we learned from several attractions we’ve designed, especially when it comes to creating a great guest experience based on a storyline.”

Accolades for Fear the Walking Dead Survival range from “scary, fun, and immersive” to “the new must-see attraction in Las Vegas.”

It seems there’s no fear for this attraction’s survival.