Evolv Technology, a leader in human security, has released insights from a survey conducted by The Harris Poll on security screening for ticketed venues, workplaces and schools.

Evolv Technology has revealed some insights on American attitudes to security screening, based on a survey of over 1,500 American adults, conducted online by The Harris Poll. One of the key findings was that respondents would feel safer with touchless security screening at ticketed events, workplaces and schools.

On 12 November, Evolv Technology and Harris Poll Executives will hold a webcast to review the implications of these findings for venue and facility operators.

The survey was conducted with more than 1,500 participants who have a personal stake in the security screening experience. These were people who had attended ticketed events last year, who have school-aged children and workers at large factories, warehouses and distribution centres.

Americans concerned about security and safety

All three groups of respondents felt that the risk of public violence is getting worse (70%) and 28% said that they felt unsafe going out in public.

69% value the general sense of safety that physical security measures provide, and 54% believe there is deterrent value in those measures. However, traditional metal detector screening measures could create more risk during the pandemic. 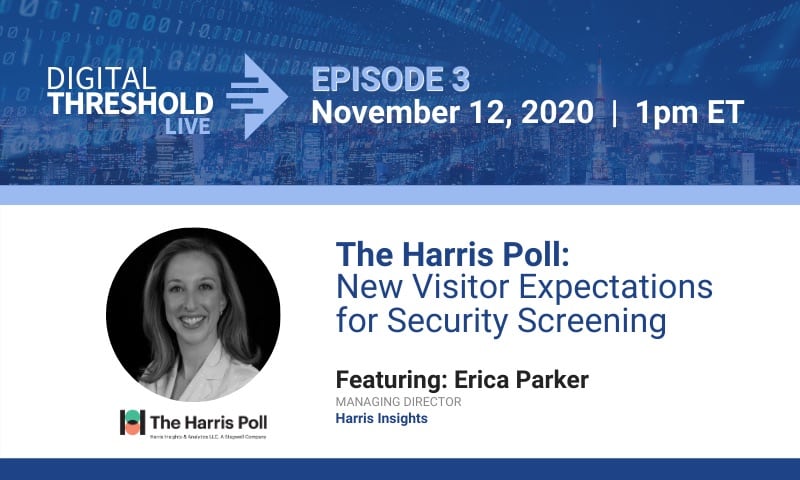 “For most venues and facilities, COVID-19 marks the end of the era for traditional metal detector security screening,” says Evolv Technology CEO Peter George. “The pandemic has pushed frustration with crowding and hands-on bag checks beyond the boiling point. However, there is a way forward. Visitors are saying they’ll come back to venues if they see security screening that preserves social distancing. Our customers are successfully reopening with touchless security screening and everyone is loving the new experience.”

Evolv Technology Co-founder Anil Chitkara and Erica Parker, managing director at The Harris Poll, will discuss the implications of these findings for workplaces, schools, ticketed venues and other facilities on the November 12 episode of Evolv’s Digital Threshold Live webcast series, which you can register for here.

Using AI software and powerful sensors, Evolv Express can screen up to 3,600 people per hour – 10 times faster than traditional methods like metal detectors, hand wands and manual inspections. The system enables social distancing at entrances and other security checkpoints while minimizing person-to-person interaction.