A milestone event for our industry was the recent opening of Chimelong Ocean Kingdom on Hengqin Island near Macau, which features the 1, 888-room Hengqin Bay Hotel, Ocean Kingdom theme park and Chimelong International Circus. It drew some 500, 000 visitors during its first 10 days in business over Chinese New Year.

When fully completed the $5billion resort complex developed by Chimelong will feature 12 theme parks and 10 hotels. The Government is keen to turn Hengqin Island into a leisure hub similar to Orlando; Genting is reported to be looking at a site for a future Resorts World project and Galaxy Entertainment is considering investing in sports stadiums, golf courses and a marina.

This could be the world's biggest leisure hub in the making! It is certainly a fascinating time for our industry and so, being based in Hong Kong, I decided to go for a site visit.

I came in from Macau and it was very quick and easy: I walked from The Venetian to the Cotai Border Gate (10min) and took a taxi from the Chinese side; I reached the Hengqin Bay Hotel in less than 10 minutes and it cost me US$5!

The hotel is very impressive. Although inspired by Atlantis Dubai it is very well executed and the rooms are very tastefully done.

Guests have a choice of sea view (see top image) or park view. The general feeling is very much that of an integrated resort with giant pools, dolphin enclosure (not finished yet) and an artificial river going from the hotel to the circus and onto the theme park with shuttle boats running back and forth.

The meeting space is absolutely massive and clearly meant to host large international conferences. PATA just announced their 2014 AGM at the hotel in May.

As I was waiting in the hotel lobby before going to the theme park I bumped into The Theme Park Guy – I am sure all of you know him – and so we decided to go together. And there was only us – theme park buffs – to visit on a cold weekday this brand new park! Here is a short video I took of the different areas of the park and below a quick review of the park.

My overall impression was rather good. The theming was of high quality and in harmony with the overall surroundings made of lush green hills. I enjoyed the effort made with the music, which I found unusual for a theme park, more on the classic side, but very pleasant and uplifting.

I was not too impressed with the F&B offering in general as the restaurants felt they were lacking in theming and originality in the menus. Though I would have to give them a few points for the grilled squid kiosks; we enjoyed that snack option!

On the ride side, the massive wooden roller coaster I read about in the press releases was nowhere to be found; they have only one rollercoaster open, which The Theme Park Guy and I rode together and found very smooth. There’s also a water coaster (by Mack Rides), which we were the first ever visitors to ride as we’re casually informed by the staff surprised to see two enthusiastic foreigners.

Surprisingly there was no indoor or 4D ride and the rest of the attractions were all animal-based: bears (including a polar bear), otters, penguins, beluga whales and big aquarium (very similar to S.E.A. Aquarium in Sentosa).

Before leaving the park I went for the A Lo Ha! dolphin show, which was nothing too special but still pretty well executed.

The most impressive feature of the park – and certainly the signature attraction – is the giant ceiling LED screen above the main street showing captivating images of underwater world. Complemented by quality retail and F&B outlets on its sides the main street is a real success!

My final verdict: the park is of better quality than I expected; it is clearly designed for very big crowds with large alleys, walk-through attractions and big capacity shows. It is a bit light on the ride side but that probably gives them room for expansion. And that’s only one of the 12 theme parks planned by Chimelong… Hong Kong Ocean Park and Disneyland had better watch out! 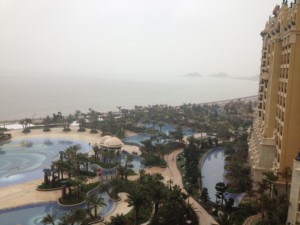