The permit requests suggest that this expansion will move into the current parking lot to create a 4.5 acre expansion. Legoland Florida has not confirmed the expansion yet.

The expansion could include new rides and play areas

Attractions Magazine spoke to a Legoland spokesperson who said “We’re always looking for opportunities to build new attractions and experiences for families at Legoland Florida Resort as the ultimate vacation destination for kids. We’re excited for our next ‘big build’ at the Legoland Florida Resort, but you’ll have to wait until next year for more expansion news.” 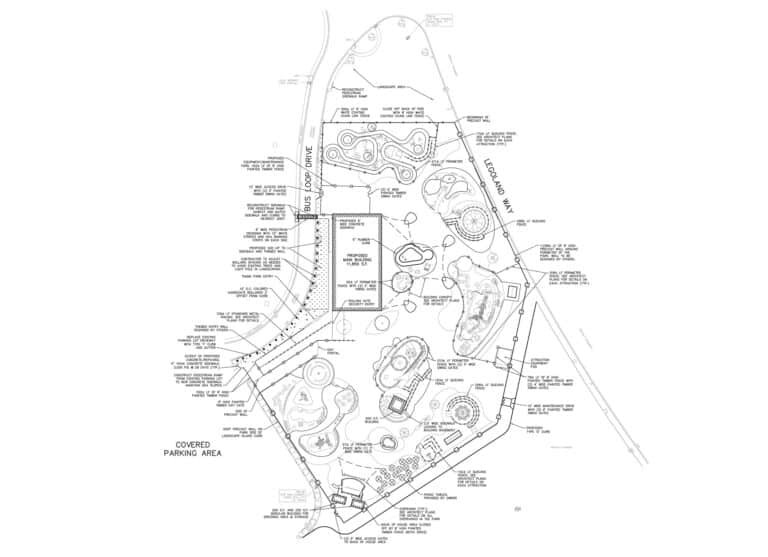 There is no confirmation on what the expansion will include. Looking at the permits, Attractions Magazine speculates that there may be a roller coaster, a drop tower attraction, a spinner ride and a water-play area. A playground, flying-spinner ride, track ride or car attraction and an outdoor amphitheatre also look likely based on the plans.

The plans do not show an outdoor food cart or food court. However, the main building seen in the permits could hold a food court with seating, as well as a shop.

The proposal stated that there will be a total of 4.5 acres of expansion which would demolish the existing parking lot. Around 2.5 acres will become impervious area like concrete walkways. The remaining area would become landscaping, turd and rubber mulch materials.

The permits do not show how the new expansion would be connected to the rest of the theme park.

There is currently no indication of the theming of this new area although the name could hint at a space or mythical theme.

Legoland Windsor, in the UK, is opening a new land expansion in 2021 called Lego Mythica: World of Mythical Creatures. This new land will feature new attractions and a never-before-seen UK ride.

Blooloop recently spoke to Merlin Entertainments to find out what guests can expect from Legoland Korea when it opens in 2022.