Jiminy Cricket summed up the principle of corporate and social responsibility rather snappily ‘ “always let your conscience be your guide.” All very well in theory, of course, but as Pinnochio found to his cost, not so easy in practice.

So, are Pinnochio’s creators doing any better?

Disney’s Citizenship 2014 Performance Summary report certainly seems to suggest so. Like all big companies, Disney has a CSR programme governing their own conduct, “Act Responsibly” (which covers all the usual stuff about Ethics, the Environment and Civic Engagement), but what’s different about these initiatives is that the company is looking beyond itself and considering ways in which it can use the power of its brand to constructively influence its vast network of fans. 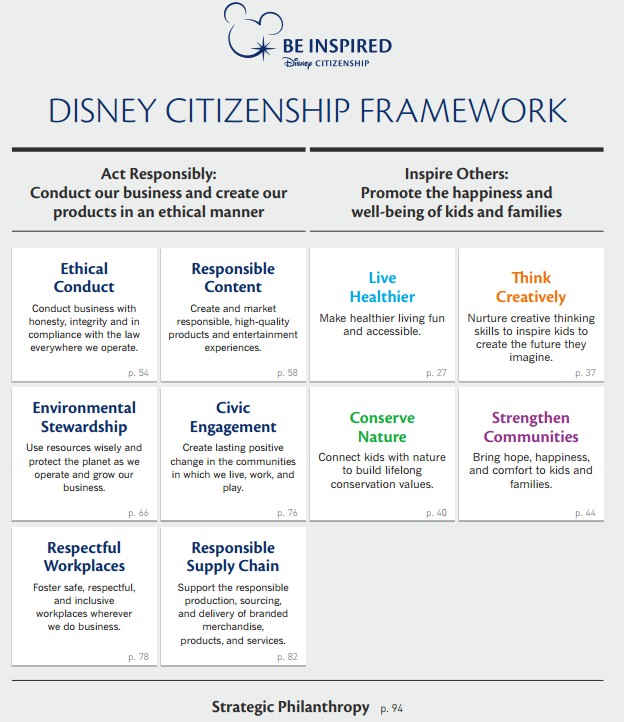 Under the banner “Inspire Others” Disney is targeting 4 key areas where it believes, not unreasonably, that it is in a position to make a real difference to the happiness and well-being of children and their families: Live healthier, Think creatively, Conserve Nature and Strengthen Communities. “Citizenship isn’t just a responsibility we have as a corporation, ” says the report. “It is an opportunity to connect with and inspire others.” I’ll be looking at their vision, targets and performance in a series of four blogs to find out what they are promising and what they have already achieved. They certainly have the clout and the resources to make an impact. And, where Disney leads, others will surely follow. This section of the report is introduced thus: “At Disney, we are committed to creating healthier generations, and we believe that inspiring healthier lifestyles today will create a brighter tomorrow.”

There is no doubt that the spiralling problem of childhood obesity needs to be tackled by a heavyweight. It is a priority of the World Health Organisation with reports suggesting that 32% of US children are now classed as obese or overweight. If they remain so into adulthood, they are at risk of associated health problems such as diabetes, high blood pressure and heart disease. The problem is one of the priorities of the World Health Organisation (WHO) and figures bandied around suggest that the medical care in America alone is costing an estimated $147 billion.

With Disney-branded foods filling supermarket shelves the company is perfectly placed to confront the problem head-on and arguably has a duty to do so.

A recent report on childhood obesity in medical journal, The Lancet, is very damning of the way the food industry targets children: “The food and beverage industries as a whole have a financial investment in creating overweight ..[children]. With about 50 million school-age children in the USA, the combined value of their excess food consumption each year approaches $20 billion.”

It’s hard enough to steer children towards healthy choices without the ever-present white noise of temptingly packaged carb and sugar-laden rubbish. So, in my book, if a Disney-branded item also happens to be a healthy item that doesn’t just help the child, it helps the parent, too. I find it reassuring that they are now aiming “to prioritize and promote wholesome foods such as fruits, vegetables, low-fat dairy, whole grain, and lean proteins that contribute to a healthful diet”. In 2006, they set a long-term target to ensure that 85% of Disney-licensed foods met Nutrition Guidelines and support children’s health. According to the report, “In 2014, 71% of globally licensed wholesale food sales consisted of everyday foods that meet our global Nutrition Guidelines; we remain on track to meet the 2020 target of 85%.” Why not 100%? They say the remaining 15% allows for celebration items such as birthday cakes and seasonal treats. I’m prepared to give them that. If treat items really are only consumed as treats and as part of a healthy diet, that’s fine. Who wants a broccoli birthday cake?

Already well-documented is their initiative, announced in 2012 and hailed by Michelle Obama as a game-changer, to allow only food-and-drink advertisers on its network that meet federally approved nutrition standards. Branded “The Magic Of Healthy living’, it’s a strong stance for a commercial company to take, even if you argue that with a reach of 100m homes, it’s more likely to be the advertisers who lose sleep over it. The fact is, that when you’re the world’s largest media and entertainment company, you make the rules. And, if you make the right rules then you not only improve your own behaviours, you give others no choice but to improve their behaviours, too.

The report also highlights other Disney initiatives to spread the message of healthy-eating such as the Mickey Check and the TRYit campaign. Introduced in 2012, the Mickey Check is a tool that makes it easier to identify nutritious choices in stores, online, and while on holiday at Walt Disney Parks and Resorts. To qualify for the Mickey Check, foods must meet Disney Nutrition Guidelines developed by health experts and align to federal dietary guideline recommendations.

“Live Healthier’ is not just about diet. The report also references the company’s creation of play spaces to encourage children to get outside: “Since 2012, we have helped support the creation of 34 new playgrounds and 18 Imagination Playgrounds, for a total of 52 play spaces.” They have already exceeded their target of 50 play spaces by 2016.

All in all, I’m heartened by this section of the report. It will be interesting to see how their lead will affect the entertainment industry, the food industry and beyond. A few ripples from Disney can bring about a sea change.