Perfect waves that break on demand? Over 200 miles from the ocean? BSR (Barefoot Ski Ranch) Cable Park Resort is bringing the surf vibe to the heart of Texas with BSR Surf Ranch. 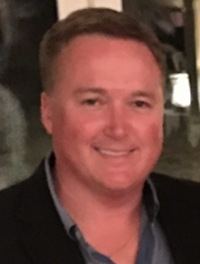 Stuart Parsons (left) has already turned his ranch into a unique water sport and leisure facility. Now he’s adding a two acre surf lake with waves by American Wave Machines. He spoke to Blooloop about his plans for BSR Surf Ranch – the perfect surf resort, just without any sea.

The upswell of out of sea surfing

Surfing is a sport on the crest of a wave. There are over 23 million surfers worldwide and the annual revenue for the industry is estimated at $7.29 billion. Now surfing has been added to the sporting menu of the 2020 Olympic Games in Tokyo. But what if you don’t live near the sea? Or if the local waves are unsuitable or unpredictable? Out of sea surfing is the answer and the technology is getting more sophisticated month on month. 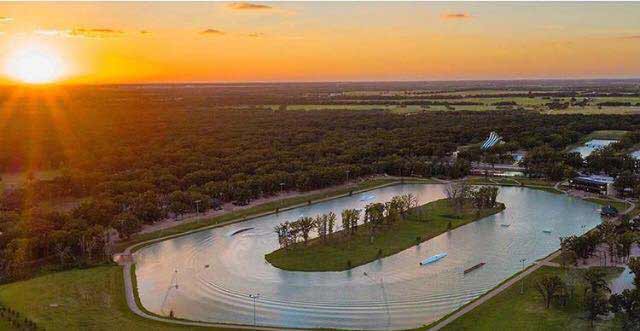 Parsons had been a barefoot ski enthusiast for twenty years when he build his first lake at BSR Cable Park in Waco, Texas.  Barefoot skiing involves water skiing behind a boat without skis: it requires more speed and more skill than ordinary water skiing. “I built it to have tournaments and to train on, ” he says.  However barefoot is an extreme sport and Parsons found that “most of the kids wanted to wake board.”  Wakeboarding developed from a combination of water skiing and snowboarding, using surfing techniques. One of Parsons’ friends had the idea of building a cable park to teach people to wakeboard. “You basically have eight people going at one time, ” says Parsons. “It’s like having eight boats. It opened up the opportunity for kids who don’t have access to a boat.  So that’s how we came up with the idea of BSR Cable Park.”

At this point Parsons decided to turn the ranch into a destination resort.  He built cabins, a restaurant and bar, and installed a DJ. “I wanted to make it the best cable park in the world, ” he says. “I think we pretty much did that.”

Parsons felt the park still lacked a vital element.  The answer was to build the extreme Royal Flush super slide.  This includes three parallel water chutes built into the side of a steep hill.  Each chute ends in a ramp which flips the rider high into the air, before they plummet into the deep pool below. It was voted the number seven slide in the world by the Travel Channel.

Wakeboarding and the Royal Flush are both pretty extreme.  Parsons wanted to make sure his resort had something for everyone – not just the thrill seekers.  “Anybody can float, so we built the world’s longest lazy river, ” he says. “So more and more people were coming. We were getting about 10, 000 people a week in the summer.”

The demographic is wide. People come from all over the world to experience the water sports, white sand and turquoise water set in 500 acres of ranch and forest.  Add in beach volleyball, a DJ, barbecue and beers, and it’s no surprise that the park is so popular.

“There are kids from Sweden who come every year and stay for a month; people from Australia, England, South Africa.” The technology utilises an air-powered system that mimics ocean waves.  It creates circular particle motion waves, just like those in the sea.  Sets of waves can be created on demand – from mushy to wedging to time aerial closeouts. Bruce McFarland, AWM’s President said,  “It’s been great working with Stuart. He understands the importance of the space, the place, and the vibe. AWM patented InfiniteOcean® lake, lagoon, and pool technology enables venues to create the beach due to natural wave dissipation and absorption technology.

“From our smaller scale SurfStream® stand-alone surfing venues we understand the importance of an authentic experience for surfers and business sustainability for owners. We’ve taken the same approach with PerfectSwell in creating waves and oceanic conditions that will stoke surfers and a system that is reliable and easy to maintain for owners. Our mantra in designing PerfectSwell was Imitate Nature.”

“We’re building something unlike anything else in the world, ” says Parsons.  “We are building the whole beach, and, you know, Waikiki.  People want to see blue water, white sand, the perfect surf coming in, cabanas, bar grills, cabins.”

We are building the whole beach, and, you know, Waikiki

Parsons says it’s too early to tell whether building a surf lake will alter the visitor profile. However bringing surfing to the US interior, particularly to a location as spectacular as this, has enormous potential.  “We’ve brought in wake boarders, we’ve brought in extremists. Surfers are a different breed of folks.”  Although there are estimated to be around 1, 736, 000 surfers in the US as a whole, Parsons says surfing isn’t big in Texas – yet.  His hope is that BSR Surf Ranch will create a new surfing community.

However the biggest draw, he feels, is that people simply love to go to the beach.  “I imagine we’ll see 50 percent growth, ” he says.

With surfing being added to the Olympics from 2020, Parsons also has professional surfers in his sights and will run competitions.  Although Olympic surfing will be held on the open ocean, parks like BSR Surf Ranch may be the future of the sport. “This machine will make it a level playing field for all surfers in a competition, ” says Parsons. “Out there in the ocean one guy might get great surf, another might not. With this machine, they will be able consistently get any type of wave for any skill level.”

The surf element will extend the season

A further benefit is that surfing will extend BSR’s season. “I have managers and employees that I have to pay through the winter, when there is no income coming in. The surf element will extend the season.  Surfers just put on a dry suit or a wetsuit, and carry on surfing.” 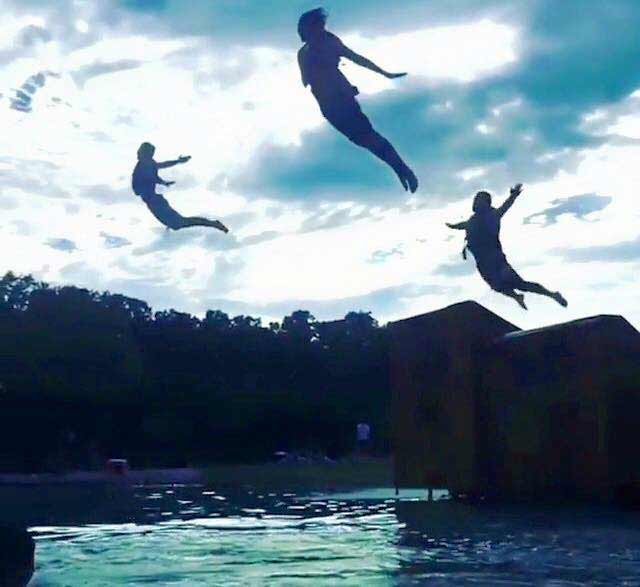 At present BRS has to turn away at least 200 people a week, according to Parsons.  So more accommodation is being planned, including as many cabins as can possibly be built.  “Everybody who sees this is going to want to stay.  It’s truly unique: it’s a waterpark, a cable park, you’ve got the woods, you’re on a ranch, there’s beer.”

It’s truly unique: it’s a waterpark, a cable park, you’ve got the woods, you’re on a ranch, there’s beer

While Parsons is fully occupied with the building of the BSR Surf Ranch, he nevertheless has an eye to the future, and further expansion. “I’d like to have something for everybody, ” he says. “I’m thinking of putting in a spa, and a go-kart track. We’re working on projects just non-stop.” 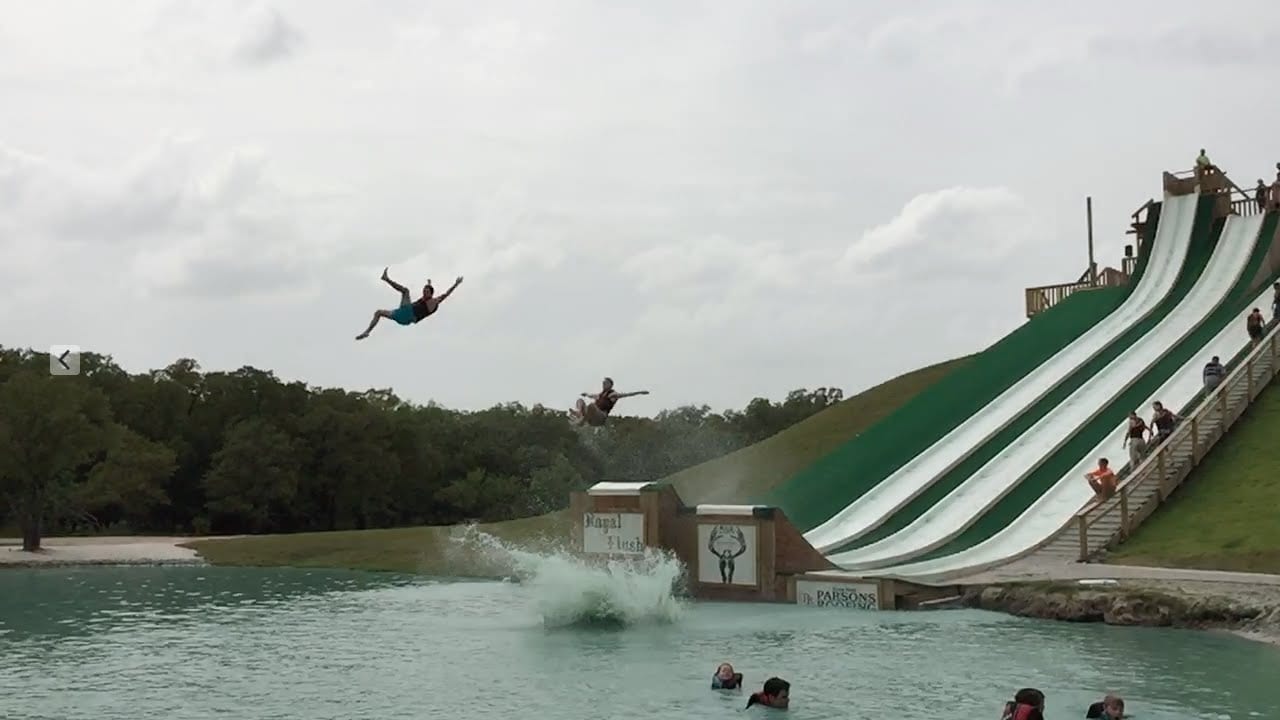 Inevitably there are challenges with running an enterprise like this. The biggest is the sheer volume of visitor numbers, especially in the peak summer season.  “People will do anything.  They will wander away from where they’re meant to be. Safety is our number one priority, ” says Parsons. While he hesitates to use the word ‘idiot-proof’, this is how he tackles the issue.  “If you’ve dug a hole in the ground, you have to cover it back up. It’s just a case of making sure that people are safe.”

The slides are another watch point.  “Our slide is not huge, but it is pretty extreme, ” he says.  “It throws you way up.  If you hit it wrong, it can knock the breath out of you. It’s a matter of watching people real close on there.”

Even if you don’t ski or surf or slide, you can still enjoy the vibe.  The slides already act as a great spectator sport.  “You’re inside woods, it’s country, you’ve got a DJ, ” says Parsons. “There’s a thousand people around the slide just watching.  I think they’re waiting for somebody to bust their butt, just like they do with NASCAR.”

He hopes this spectator aspect will extend to the surf park.  But, above all, he just wants people to have fun. “I want people to have a great time, to build sand castles, to cover their kids up with sand.”

BRS Cable Park offers the beach experience for everyone – from kids playing in the sand, through beach party teens and thrill seekers to old school surfers keen to hone their skills.  The beach scene in Waco just woke up and smelt the ocean.