The Subtropical Swimming Paradise, Center Parcs’ iconic water park, is the focus of the facelift for the Nottinghamshire resort.

The Subtropical Swimming Paradise is a key part of the Center Parcs experience.  Heated to 29.5C all year round, the indoor water zone features wave pools, canyon rides, spa pools, rides, flumes, slides and cabanas.  Work will start at the facility at Sherwood Forest, Nottinghamshire, in September.  The refurbishment is expected to take two years to complete.

The facelift will include new raft rides, toddler pools and a children’s adventure cove.  It is also likely to include the Tropical Cyclone ride.

“If you were to ask anyone what is the real iconic facility at a Center Parcs holiday park, then the Subtropical Swimming Paradise would be top of the list,” says Martin Dalby, CEO of Center Parcs. “Some families go and spend all day in there and these are the biggest indoor water parks in the UK.”

He explains that the whole swimming pool is being given “a big facelift” while new rides will also be added.  “In a couple of years’ time our guests will be able to enjoy some of the best rides around in our family area.” 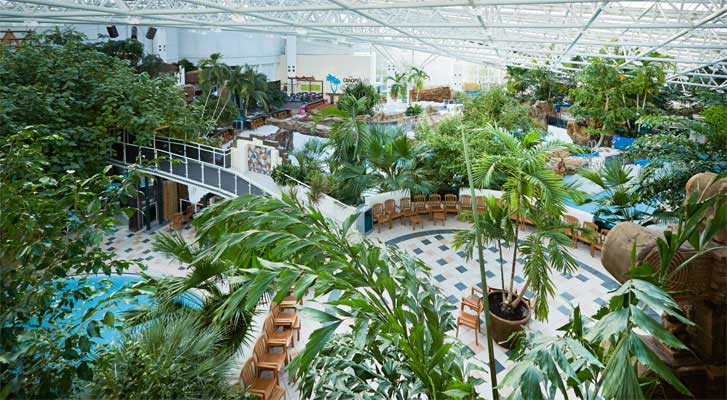 Sherwood Forest was Center Parcs’ first British resort.  It opened in 1987 and so the facelift coincides with the 30th anniversary in the UK for Center Parcs. The Subtropical Swimming Paradise has been there since the beginning.  The pool was extended three years later but, since then, the only major update has been a new raft ride in 2002.

Sherwood Forest is one of the last resorts in the brand to benefit from an updated indoor water park.  However the resort recently gained a new £3m spa.  Aqua Sana opened in April.  The new “Forest Spa” concept includes a treetop sauna, a “volcanic steam room” and outdoor hot tubs.

There is also great excitement around The Tropical Cyclone, touted to come to Sherwood Forest.  It’s the largest ride in Europe with AV interactive technology, including a drop that gives a zero-gravity sensation.  The ride is already a headline feature at Center Parcs Elveden Forest, in Suffolk.

It is also being installed at Longleat Forest, in Wiltshire which is soon to unveil its revamped water park.

“Center Parcs is well established as one of the most popular holiday destinations in Nottinghamshire, and this investment in improving its facilities will only serve to make it an even more appealing,” says Brendan Moffett, Chief Executive of Visit Nottinghamshire.

“The recently refurbished Aqua Sana spa on-site at Center Parcs has attracted national interest, and the Subtropical Swimming Paradise improvements are sure to do the same.”

The park, including the waterpark, will remain open during the refurbishment.