The new exhibit promises to raise awareness of the importance of sharks in the world’s ecosystem.

“This exciting new shark exhibit will inspire our visitors to help conserve these amazing animals and awaken them to the reality that the city that never sleeps is surrounded by the sea that never sleeps,” said Jon Forrest Dohlin, Director of the New York Aquarium and VP of the WCS.

Visitors will move through nine galleries, coming eye-to-eye with sharks, rays and other ocean wildlife that live off the coast of New York.

In total, more than 115 marine species will be on show, including 18 species of sharks and rays. The focus of the exhibit is the 450 million-year-old-story of sharks. These arch-predators are now hugely vulnerable with over 100 million sharks lost to unsustainable fishing every year. WCS’ New York Aquarium scientists work to protect sharks throughout the region while the WCS works globally to protect sharks.

“The opening of Ocean Wonders: Sharks! is a transformative moment for the New York Aquarium,” said Cristián Samper, CEO and President of the WCS. “The exhibit inspires awe and admiration for sharks and opens our visitors’ eyes to what they truly are – keystone species in the world’s ocean… The exhibit will connect millions of visitors with the wildlife and habitats in New York waters and expands the Wildlife Conservation Society’s global commitment to shark and ray conservation.”

A new generation of conservation stewards

It is hoped that the exhibit will create a new generation of conservation stewards. “Ocean Wonders: Sharks! is a perfect example of the higher purpose of zoos and aquariums – the conservation of wildlife and wild places,” said Jim Breheny, WCS EVP of Zoos & Aquarium and Director of the Bronx Zoo. “You can’t go through this exhibit – where you can find yourself just inches from a shark – and not be inspired to join our efforts to save sharks and the ocean.”

About 60,000 young people and adults per year are expected to participate in the aquarium’s education programmes. The Oceanview Learning Laboratory on the top floor of Ocean Wonders: Sharks! offers a 1,500-square-foot education space housing a rooftop touch tank and offering a new overnight programme.

The New York Aquarium uses green packaging and is working on eliminating all single-use plastic in its restaurants and retail outlets. Awareness of the perils of plastic for our oceans is growing, as witnessed by initiatives such as The Ocean Project. 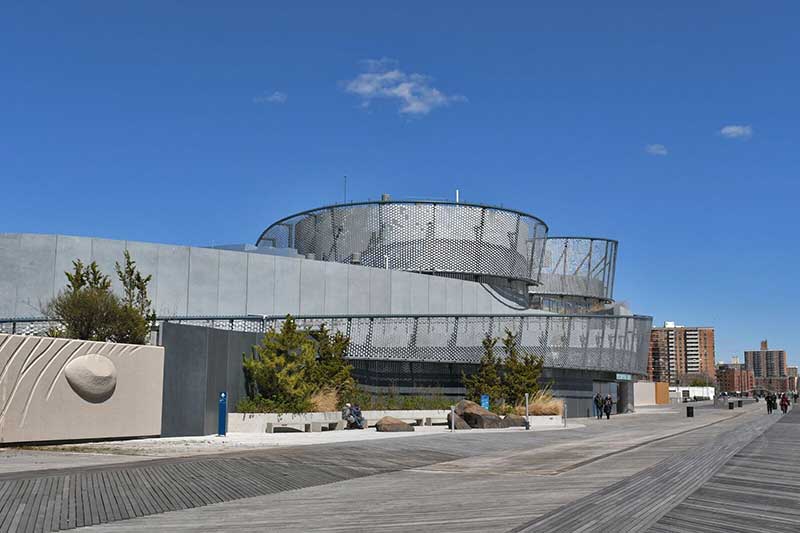 Ocean Wonders: Sharks! cantilevers over the Coney Island boardwalk. The dramatic design was created by a team headed by Susan Chin, Vice President of Planning & Design and Chief Architect at WSC, in collaboration with Edelman Sultan Knox Wood/Architects, Doyle Partners, and The Portico Group. The 1,100-foot-long Shimmer Wall wraps around the curves of the building, creating an ever-changing façade, moved by the wind. “The architecture evokes the natural world and reflects the function within,” said Chin.

Ocean Wonders: Sharks! (along with its Animal Care Facility) cost an estimated $158 million. $111 million came from New York City with a further $47 million from private funders and tax exempt financing. The exhibit is expected to contribute over $20 million annually to the $80 million generated overall by the aquarium.