Among the selections for this year’s Hawaii International Film Festival is We Came Back For You, by artist Taiji Terasaki of Terasaki Exhibitions.  The film evokes the enigmatic nature of memory through image projection onto mist, and first appeared as part of Taiji’s cutting-edge exhibition at the Japanese American National Museum (JANM) called TRANSCENDIENTS: Heroes at Borders.

The debut of the film at JANM was delivered via a mist theatre built by Mad Systems Inc., the award-winning audiovisual and interactive system designer and integrator.

TRANSCENDIENTS: Heroes at Borders was created by Terasaki as a living memory of the Japanese American internment camps, as well as a tribute to activists from the arts, inter-faith, refugee, LGBTQ communities and beyond who continue the fight for democracy and justice for all.

While the exhibition itself was forced to close early as a result of the global pandemic, more audiences will have an opportunity to see Terasaki’s mist film We Came Back For You. Thanks to its screening at the Hawaii International Film Festival this November, an adapted version of the film – without the mist theatre – will play to audiences.

“In collaboration with the Japanese American National Museum, my captivating mist film We Came Back For You features a montage of photographs by psychotherapist and activist Satsuki Ina,” says Terasaki.

“The photographs are during and after Ina’s incarceration during World War II and from her current activism. These images connect the travesty of democracy from the past to the present-day crisis occurring on the U.S.-Mexico border, where immigrant refugee families are being separated and indefinitely held in detention centers.”

Building the mist theatre was an interesting challenge for Mad Systems. The company needed to create a theatrical environment that projected Taiji’s film onto an 8’ wide water-based fog screen without affecting the humidity in the gallery, or in the museum as a whole. Due to the air conditioning system at JANM not being segmented, if humidity was to get into the HVAC, it could have had an impact on the entire building.

To overcome this, Mad Systems created a double-layered tent using a truss structure:

“The airflow is designed to ensure that it is laminar around the output of the fog machine to create a coherent fog field, and then set up so that the damp air enters a bank of 10 dehumidifiers before being re-cycled and pushed back up to the plenum formed by the inner and the outer tent structure and re-used to keep the output of the fog machine as laminar is as possible,” says a statement by the company.

“The result was an exhibit that did not affect the humidity around the fog screen on the gallery side by more than 1-2% RH, whereas the humidity inside of the containment structure was measured to reach up to 96% RH.”

The mist theatre was just one element of the work that Mad Systems executed for JANM’s exhibition. The company also designed a walkthrough experience in a 40’ shipping container, that had to be designed to meet stringent LA port requirements for future onward shipping.

This involved modifying a freight container, located on the plaza in front of the JANM, to contain an eight projector show with a fog screen in the middle. This fog screen featured a projector on both sides showing different imagery, meaning that each image could only be seen on the opposite side of the projector.

The set-up also necessitated the creation of a stainless-steel extraction tray at the base of the container, to create a laminar flow to create a coherent fog screen and to get rid of the fog and prevent humidity from building up inside.

For the visitor, the content was projected both onto the fog screen and onto the surrounding walls, for an ethereal image that showed the story of a family behind a chain-link fence, inside an internment camp, with faces from the visitors’ own group also looking back from the other side, floating in the fog. This gave the impression that they were outside the camp, looking in.

Visitors were then asked to step through the screen and see the story unfolding inside the fence where they realized that they were with the family on their side of the chain-link fence.

Mad Systems Inc. recently celebrated the opening of Crayola IDEAworks: The Creativity Exhibition at its world premiere location, the Franklin Institute in Philadelphia. This travelling exhibit uses a wireless implementation of Mad Systems’ QuickSilver® solution, making exhibition operations including strike and set-up easier as there is only one signal cable that needs to be installed. 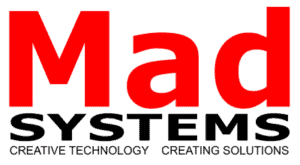