Avolites, the global lighting and video control company, has announced the launch of its most advanced console yet, the Diamond 9.

Avolites’ new console, the Diamond 9, launches today and will be available in two different versions, the  D9-330 and the D9-215. Both visual canvas controllers allow production designers to achieve creative control in lighting, broadcast and AV, meaning they are able to create, program and command world-class performances.

The company has drawn on its 45 years of experience in the industry to produce the ultimate control surface, taking into account feedback from those within the industry as well as award-winning industrial designers.

The Diamond 9 allows users to intuitively combine lighting, media and other visual aspects of a show together, giving them creative freedom when powering shows. 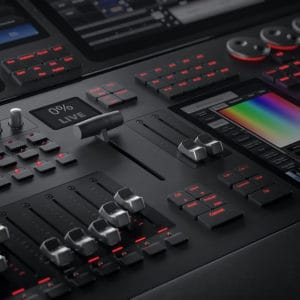 The console has a new look, with main front panels constructed out of a single sheet of aluminium for a high-end finish.

The D9 – 330 features 11 ultra-bright touch screens, which includes three main workspace screens as well as three screens for media preview, alongside specific screens for attribute control and softkey short cuts. The Penny & Giles faders are motorised and touch-sensitive and the encoders have their own RGB bar graphs for ease of monitoring. The console also features a backlit integrated keyboard.

On the right-hand side of the D9, users will find five encoder wheels and a T bar for controlling scene masters. In addition to this, there is a new set of carefully positioned, bespoke buttons for easy operation.

“I had the privilege of using the D9-215 back in January 2020. The experience was fantastic. Programming on it felt familiar but greatly enhanced by the step-up in hardware allowing for smoother, quicker and more enjoyable programming experience” says Tom Campbell (MIRRAD), production and lighting designer.

“As a long term user of Avolites, I’m very excited to see where the D9 takes the company and I’m very proud to have had a small part of it.”

As well as the aesthetic design, the Diamond 9 console has been created to give more intuitive media control integration for lighting designers in all sectors of the industry. This builds on Avolites’ release of Synergy in 2019, giving seamless integration between the media server and lighting control.

Users will be able to create immersive and seamless lighting and video performance, keeping up with the latest trends such as the use of video walls. The D9 has a dedicated Master Cue List Control section with nine buttons for editing and operating the cue list. There are also two dedicated faders, to set the intensity of the cue as well as the effect rate or manual crossfade. The D9 also features Avolites’ new logo. This is the first notable change to the logo since the company began in 1976.

“The Diamond collection, with our new brand logo, marks the first step in our future-facing strategy as a company,” says Paul Wong, Managing Director of Avolites. “The D9’s are the resulting product of years of R&D investment, and we’re very proud to be giving our users the ultimate programming tool for their future creative projects.”

The Avolites D9-330 and D9-215 are available to order now. For more information, please click here.

Last year, Avolites provided lighting control solutions to LIT Lighting, a Pheonix based company which has adapted to the challenges of COVID-19 by establishing LIT Live.