Launched on February 23, Story Arcade in New York City showcases some of the latest next-generation storytelling. One of eight experiences on offer at the pop-up attraction is Jurassic Flight, featuring the BirdlyVR platform from D3D Cinema and Somniacs. 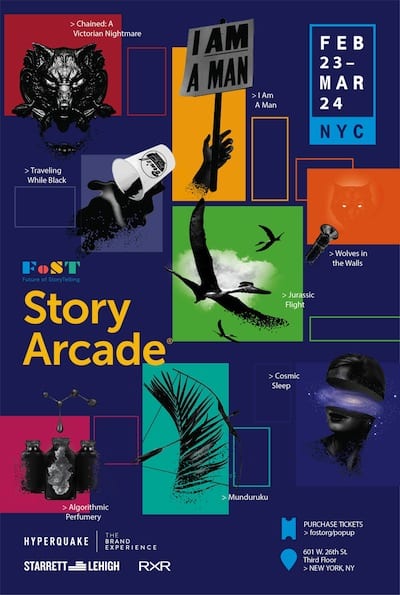 Located at the Starrett-Lehigh Building in the Chelsea district of Manhattan, the Story Arcade is presented by the Future of StoryTelling (FoST).

“It’s an honour to have been selected by FoST to present Birdly alongside some of the best in immersive media,” says Tom Rooney, director of sales & marketing for Birdly VR. “We’ve received amazing feedback on Jurassic Flight since its release last fall, and we’re excited to give more people the opportunity to try it.”

Among other US venues already offering Jurassic Flight is the Museum of Natural History & Science in Cincinnati. The virtual reality experience is featured in the museum’s revamped dinosaur hall. By sitting astride the BirdlyVR platform, visitors can take to prehistoric skies and interact with dinosaurs.

See comedy actor Jack Black trying out Jurassic Flight and other experiences out at Los Angeles’ Two Bit Circus in the video below.

The Story Arcade continues in New York City until March 24. In addition to Jurassic Flight, other intriguing sounding experiences include Chained: A Victorian Nightmare, I am A Man, Traveling While Black, Wolves in the Walls, Cosmic Sleep, Algorithmic Perfumery and Munduruku. Professionals from the attractions industry and cultural institutions are invited to contact Birdly to arrange a private tour.