MediaMation, a leader in immersive entertainment technology, is set to top over 400 installations of MX4D this year, spanning 21 countries.  The immersive motion EFX experience will soon be available in over 400 locations.

MX4D enhances a whole range of films, from children’s titles to action-packed blockbusters. It provides a fully immersive experience including fog, snow, rain, strobe lights and bubbles. Viewers are positioned in seats with a full pneumatic range of motion, which also include innovative extras such as neck and leg ticklers, wind, water, scent, rumblers and pokers. The process is quiet and safe, with the seats being low maintenance and non-electric.

MX4D programmes the latest Hollywood hits, such as Disney-Marvel’s superhero feature Captain Marvel, and Warner Brother’s underwater adventure Aquaman. This type of movie is ideally suited to the MX4D experience, they attract large audiences and have a communal feel. These films tend to sell out on weekends and enjoy extremely high occupancy rates during the week,” said Howard Kiedaisch, CEO of MediaMation. “Our theatres are created to serve movie lovers and thrill-seekers who want a full and impactful movie-going experience with audience participation. We have been thoughtful in our growth and the new ventures globally and domestically are part of a greater vision that includes MX4D technologies as well as opportunities for immersive esports team gaming events and more.”

Venues up-charge an average of $8 per ticket for the MX4D experience. Independent surveys have found that customers are happy to pay extra for a truly immersive cinema experience that they wouldn’t be able to get at home. 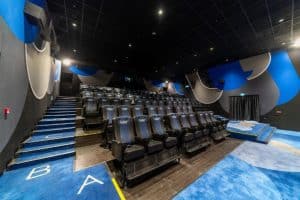 MediaMation is installing systems over five continents. This includes new African locations such as Filmhouse Cinema’s Victoria Island Theatre and Landmark Village in Lagos, Nigeria. Kene Okwuosa, Group CEO of Filmhouse is pleased with the new development. “We are very proud to be partnering with MediaMation to bring MX4D to our theatres in Nigeria. Cinema is growing fast in West Africa and we are delighted to be at the forefront of the industry, with the latest in immersive viewing technology. The future is very exciting.”

Customers in South America can also enjoy MX4D with systems under construction in Chile’s Muvix Cinemas, joining the existing South American installations in Cine Colombia venues. Other installations scheduled for 2019 include a first location in India, with INOX Theatres in Inorbit Mall, Mumbai. This joins an already large presence in Asia, with up to 250 installs in China, as well as locations across the Middle East, Thailand, the Philippines and Malaysia.

European and North American customers won’t be missing out either. New European locations will be announced soon, and several new US locations are under construction. For example, B&B Theatres are continuing to open more MX4D locations across the US.

MX4D also offers a system which allows venues to diversify by converting to esports arenas. These locations will have the flexibility to go from 4D film showings to interactive gaming experiences. This can include sponsorship zones, live transmissions of contests and pop-up gaming areas.

One example is TCL Chinese Theatres’ recently announced esports venture, Hollywood Esports. It will be located in the new luxury cinema, dining and entertainment complex, Theatre Box, in San Diego’s Gaslamp Quarter. This is the second location to feature the unique Hollywood Esports concept. The auditorium can be converted from a film viewing set-up to an esports venue in less than one hour, in order to host esports tournaments and events.

The venue will incorporate MediaMation’s MX4D motion and special effects technologies, including a range of innovative features and gaming hardware. As the tournament unfolds on screen, spectators’ seats will respond with motions and special effects, while the auditorium will also be brought to life with extra features.

“We are thrilled about the addition of a Hollywood Esports MX4D Theatre at Theatre Box,” said Charissa Davidovici, Theatre Box partner. “There are so many university students and military personnel in San Diego, making the city a natural fit for gamers. This is an exciting opportunity for gaming and tournaments. With TwitchCon returning to San Diego this fall and Comic-Con International’s commitment to the city, our new gaming theatre will be the perfect venue to host associated events.”