“EmbodyMove utilises spatial computing to immerse players in an experience centred on movement, wellness, and connectivity to others,” said Melissa Painter, founder of MAP Design Lab.

“We’re excited to share Embody with Two Bit Circus’ park goers, and allow the players to connect with one another in new ways through the use of VR technology.” 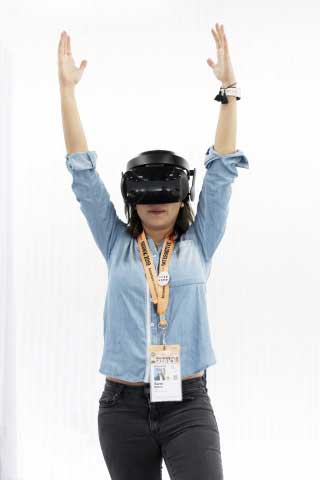 The VR experience takes two players on a shared journey, inspired by the practices of aikido, yoga, and dance movement traditions.

EmbodyMove will take place within one of four private cabanas at Two Bit Circus. Within the cabana, the peaceful VR experience takes participants on a journey through nature while they trade and transform avatars.

EmbodyMove’s holographic guide takes users through movements, allowing them to see their bodies as flexible tools. By using a headset, players are free to focus on creating fluid motions, and pilot the whole experience with their bodies.

Pressure-sensing yoga mats track users’ weight distributions, while a camera monitors pose position. The greater accuracy the player completes the pose with, the more the virtual environment changes and evolves around them.

EmbodyMove is driven by users’ interactions

Players prompt each other through conversation, mirroring, and environmental channeling, and step together through physical sequences designed to centre, balance, extend, and strengthen.

“Following their immersion in EmbodyMove, people feel more connected to their own bodies and the ways they interact with each other in a virtual space,” said Aaron Pulkka, Head of Attractions and Production at Two Bit Circus.

“VR is not just about immersing people in battlezones. At Two Bit Circus, we believe that technology can enhance our ability to connect and play together, elbow-to-elbow. EmbodyMove is a great example of how VR/AR/XR can be used in different ways.”

In more wellness news, the Natural History Museum is putting on a series of yoga and wellness classes under a large moon art installation.

EmbodyMove will debut at Two Bit Circus’ Beta Night at the Micro-Amusement Park in Los Angeles on Tuesday, April 9.