The offering at Medina Mediterranea is broad. And it’s just gotten broader with Carthageland. Visitors can shop to their heart’s content at the souk. The Museum of Religions is housed inside a building topped

with a Mosque-style minaret. From ruined ramparts to multiple towers, the Medina offers a wealth of architectural gems. There’s also a casino, dinner show and street theatre to enjoy.

Those wishing to stay the night within the Medina’s walls can choose from a trio of 4 and 5-star hotels. Business travellers can make use of the exhibition and conference facilities. The entire complex attracts around 2 million visitors a year. And then there’s the amusement park offering, which welcomes around 1 million annual fun-seekers. 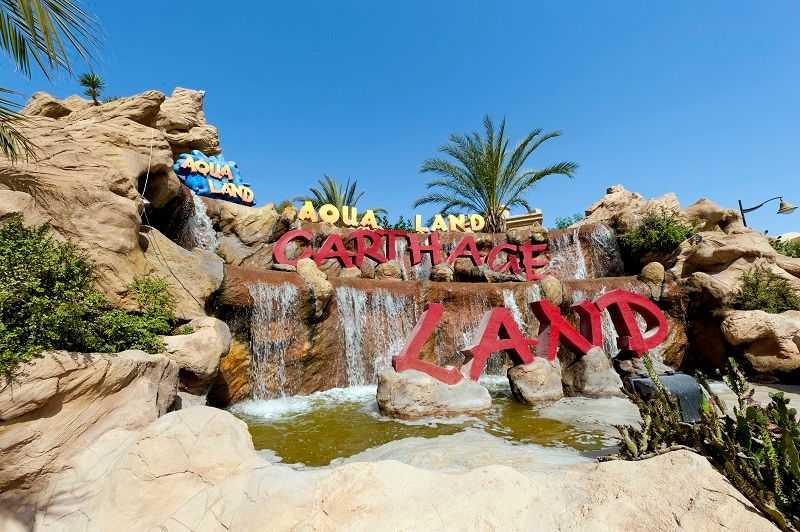 Carthageland is one of two parks in Tunisia bearing that name. The other is located about an hour away in the Berges du Lac area of Tunis, the nation’s capital. However Cartahgeland Yasmine Hammamet, to give it its full name, is the flagship property. Popular with tourists from Tunisia, Algeria and Libya, it’s actually several parks within a park. Together Carthageland, Aqualand, Aladin Park and Ali Baba Park comprise an outdoor/indoor family offering featuring both dry and wet elements.

“Medina Mediterranea is the essential leisure destination in Tunisia,” said Carthageland General Manager, Slah Chahtour. And he’s quick to single out the park’s signature new attraction for 2018: “If you are looking for an adrenaline rush and the most incredible entertainment in Hammamet, King Kong is for you!” 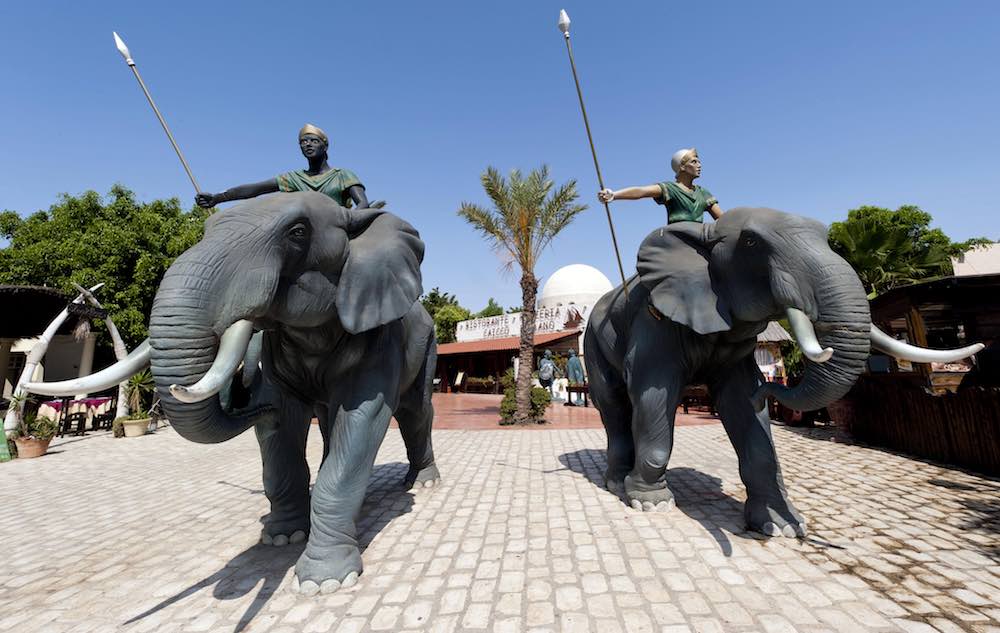 Featuring 280-metres of light blue track, the spinning rooftop rollercoaster opened in late March. Manufacturer EOS Rides was not just responsible for the coaster itself. The Italian company also supplied the 13.3 metre-tall roaring animatronic gorilla that sits over it, in addition to various other effects that appear inside the accompanying pre-show and dark ride sections.

The attraction, which EOS is marketing as Giant Ape Adventure, is of course inspired by the King Kong movies. But here, instead of Manhattan’s Empire State Building, the gorilla sits atop Hammamet’s 15th Century Medina. And rather than getting his clutches on a damsel in distress, he has his sights set on the rollercoaster’s riders!

The park gets its name from Carthage, the capital of the ancient Carthaginian civilisation. Those fearing that Carthageland has committed some kind of cultural vandalism by installing such an attraction within the ramparts of this historic building may take some heart from the fact that it occupies only a fraction of the sprawling Medina complex. The ride’s 35 x 48m footprint is accommodated on a previously inaccessible terrace called Asfour Stah.

Whilst there may be other King Kong theme park attractions in the world, this is believed to be the only rollercoaster featuring the famous ape. As it’s the park’s first ever coaster, Carthageland could have opted for something simpler. But with this new attraction it’s got a ride with real marketing potential. 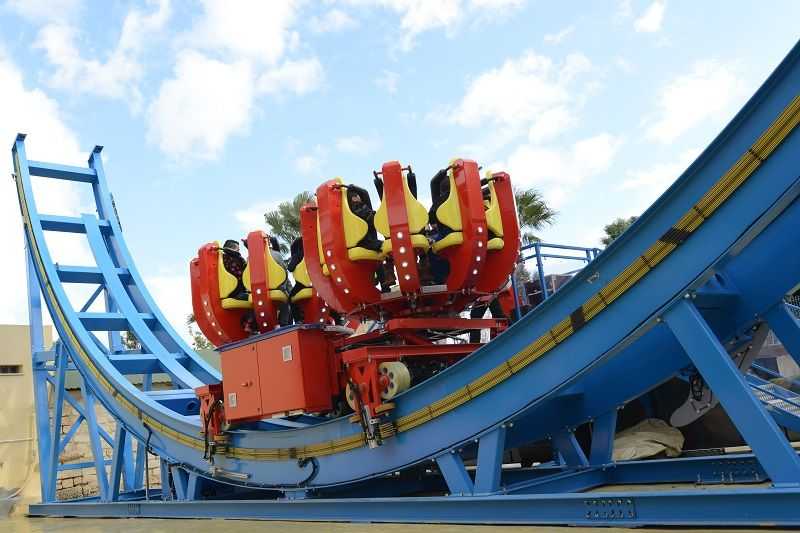 “Our choice from the start was for a spinning coaster,” said Chahtour. “It gives an extra sensation to the rollercoaster experience. But the location on the roofs of Medina make this spinning coaster really unique. Riders benefit from the exceptional panoramic view of the sea and landscape.”

King Kong is the icing on the cake, but why choose the hairy Hollywood star as the ride’s centrepiece? “Our Medina is giant, it is the Medina of all the Mediterranean,” said Chahtour. “It was thus necessary to have a giant subject that reflects the place. The character King Kong looks very good and integrates with the environment of Yasmine Hammamet. In his new residence he will now monitor the Medina for life!”

According to EOS Rides, the gorilla figure is tallest animatronic ever built. Sales Manager Michela Favero described his movements: “During the ride, his body rises. He moves his arms to punch his breast, turns his head in all the directions and moves his mouth. He breathes heavily and water comes out of his nostrils when he roars in anger – he is a scary beast!” 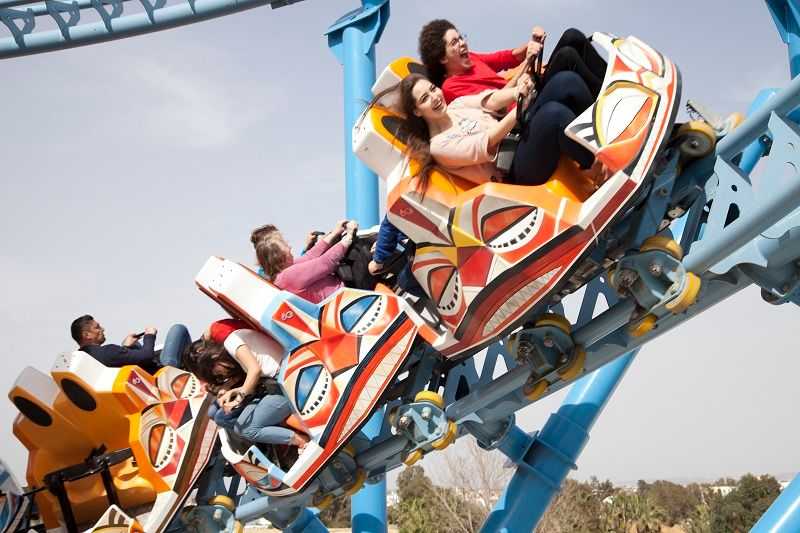 The ride itself comprises three sections. Whilst the roof of the Medina is 10m off the ground, guests board the 20-seater train (5 x 4-seater cars) inside a station a further 2m up. The train then travel outside and climbs the tyre-driven lift hill. At the top, riders are 27m (nearly 90 feet) above Hammamet, but they’d better not get used to the view.

Soon the train descends, spiralling twice around King Kong and reaching a top speed of 60km/h before approaching a water explosion and passing into the dark ride section. Yet whereas most rollercoasters become less thrilling towards the end, this particular ride has plenty more in store.

The indoor section starts with a 20m-long tunnel, through which the train moves slowly, although the cars continue spinning. Guests then enter a mysterious jungle, which comes alive with tribal music.

The train then comes to a complete stop, and the cars rotate slowly. Ghostly figures appear from all around. The building is then plunged into near darkness. All guests can see is the shape of a skull. Little by little, with the aid of video mapping technology, a creature comes to life. Flesh forms, eyes appear and a giant gorilla’s head roars to life. In total, the dark ride section lasts around two minutes – and catches almost every guest by surprise.

“Visitors are super happy,” said Chahtour. “King Kong immerses guests into a fully themed experience from the entrance to the exit.”

It’s not just riders who can see and hear King Kong roar. During the design of the attraction, that layout of the coaster was reversed so that the lift hill was built behind the gorilla. Spectators on the ground therefore can enjoy an unobstructed view as the beast puts on a show. He is expected to entice many curious visitors into Carthageland. Favero said that construction of the ride was not without its challenges. “The main challenge was designing a frame which would fit onto an existing building with an irregular shape and dimensions. The building used to be dedicated to a steam bath, so was covered with vaults and not built to shoulder any weight. The building structure was reinforced, while the frame was designed for better load distribution.”

“Throughout the process, the EOS engineering department worked in close contact with Carthageland’s civil engineers,” said Favero. “A team of top Italian engineers double-checked all the drawings, calculations etc. Finally, a French institute nominated by the Tunisian client checked and approved the production, installation and the functioning of the ride.”

EOS Rides’ relationship with Carthageland dates back to 2010, when the company supplied a fun house, mirror maze and dark ride for the Aladin Park area of the operation in Hammamet. Since then the company has supplied multiple attractions, large and small, both here and at the sister park in Tunis. “[EOS Rides boss] Loris Darsie really believed in our concept for King Kong,” said Chahtour. “The management and staff of Carthageland are happy that our dream was realised with EOS.”

Another highlight of the park is the Barbarossa Adventure dark ride by Mack Rides. Given that summer temperatures can reach the mid to late 40s (°C), water rides are popular too. Such offerings include the Periple of Hannon raft ride by Hafema and Conquerors of the Mediterranean, an extensive flume from Intamin.

Carthageland is already in collaboration with EOS on another project, an attraction called House Hantee. The giant monorail will offer visitors a panoramic tour of the Medina. A less intimidating experience, perhaps, than an encounter with a giant gorilla. But surely not as much fun!