Universal Orlando Resort has announced a new Christmas event at The Wizarding World of Harry Potter.

From November 18 to January 6 guests will be able to celebrate magical Christmas at Hogsmeade and Diagon Alley. 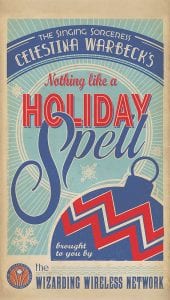 As well as themed Christmas decorations, there will be new entertainment specially created for the holiday season.

The Wizarding World of Harry Potter – Diagon Alley at Universal Studios Florida will showcase Celestina Warbeck and the Banshees performing songs like “Nothing like a Holiday Spell” and “Accio Christmas.”

At The Wizarding World of Harry Potter – Hogsmeade at Universal’s Islands of Adventure, the Frog Choir will entertain guests with three new holiday songs, including, “The Most Magical Yule Ball Of All.”

In the evening Hogwarts castle will be lit up with a projection mapping experience – “The Magic of Christmas at Hogwarts Castle.”