The technology, which allows a special surface to become transparent when triggered, has a host of applications for theme parks.

The patent – “Display System for Transforming Sunlit Surfaces” – comprises a surface that, although it may look like a wall or box, could become transparent, revealing whatever lies inside it. WDW’s News Today has called it a ‘magic surface’ – and it’s an apt name.

Imagine a self-darkening window that keeps out bright light. However, in this case, the technology would make the window show an opaque image that can be switched off to become clear. 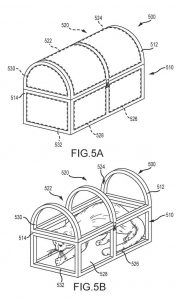 Disney could use the technology to create a surface (say, a piece of wall) that could vanish to reveal what lies behind it. The patent itself shows an illustration of a chest that becomes transparent to show the cat sitting inside, ruining forever the paradox of Schrödinger’s cat!

Usually this kind of sleight of eye can only be carried out in the dark with a projector so what makes the idea especially useful is that it works in bright light, or sunlight.

A solution to the issues with projection-based transformation

Projection-based transformation is used in many theme park attractions – from indoor rides to theatrical shows. However, in every case, the lighting needs to be tightly controlled. Projection-based surface transformation simply doesn’t work well in daylight and in outdoor situations because the projector has to attempt to cope with the brightness of the sun. Also visitors can step in front of the image, causing disruptions and breaking the illusion.

Disney has already mastered projection technology for after-dark shows such as the Happily Ever After evening attraction at Magic Kingdom. This patent would let Disney highlight surfaces or objects, bringing them to life for visitors, during the hours of daylight.

Disney’s patent doesn’t give precise examples of how the technology could be used in their theme parks, but it’s easy to see a variety of uses. The applications references the simulation of lasers hitting a wall – and one could easily imagine how Star Wars: Galaxy’s Edge themed land and Star Wars hotel could use the technology in that way. Equally a wizard could aim a spell at a wall or characters could write on a wall.

Patents often give tantalising hints to how theme parks attractions will evolve. The competition is fierce to be first with the latest industry advancements, so the best ideas are closely guarded secrets to prevent knockoffs and copycats.

Disney was granted 195 patents by the U.S. Patent and Trademark Office in 2016, placing the company 176th overall in terms of patent grants earned that year, according to the Intellectual Property Owners Association.