New ride announcements were everywhere you looked over the past week. This was especially so with Six Flags making announcements for every one of their parks all on the same day. Here are the highlights of what you may have missed:

1) Carowinds to open Copperhead Strike in 2019 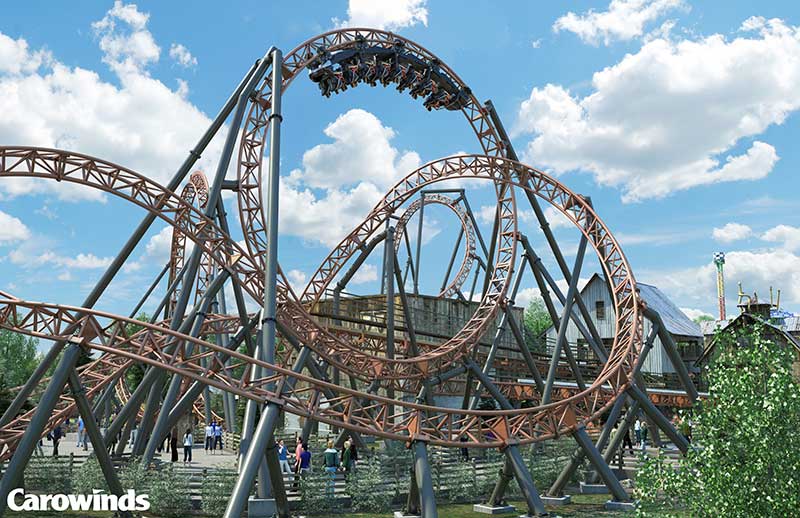 The Cedar Fair chain is trying something new this year in the form of a Double Launched coaster from Mack Rides. The coaster, with trains themed to look like 1940’s era Ford trucks, will also go along with a moonshine theme. This acts as a throwback to two former coasters removed from Carowinds in years past: White Lightnin’ and Thunder Road. The layout will feature two launches (42mph and 50mph) and send the riders through 5 inversions. Additionally, there is also a lot of very low to the ground twisting and turning track. 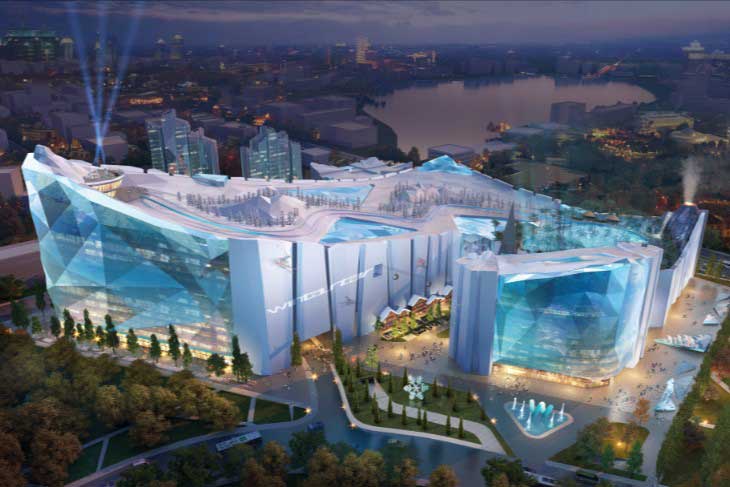 The world’s biggest indoor ski park was just announced to be coming to Shanghai, China by 2022 from the operators of Ski Dubai and Ski Egypt. It will feature three indoor ski slopes, various snow play attractions, a Nordic themed waterpark and more.

Walibi Rhone-Alpes confirmed that the park would be opening a unique new Gerstlauer Infinity Coaster for the 2019 season. No further details about the layout or name of the ride were given.

Premier Rides will join forces with Six Flags Magic Mountain again to create a unique new creation: the world’s first quadruple launched coaster. Taking a nod from the design of the park’s Twisted Colossus coaster, the West Coast Racers will feature race-car themed trains traveling side by side along a pair of tracks. When your first lap is over, your train will move onto the second, slightly different track. Then, you will race a new train of racers coming out onto the first track. This occurs after going through some kind of “pit stop” scene which was created with the help of West Coast Customs. With a beautiful layout, many unique cross-over elements and inversions, and a sunny California location, this is going to be one of the most photographed coasters of the year.

Six Flags is bringing on S&S – Sansei to build Maxx Force, a large air-launched coaster that will break three records: Fastest Acceleration in North America (78mph in less than 2 seconds), Tallest Double Inversion in the World at 175 feet and Fastest Inversion in the World with a Zero-G Roll to be taken at 60mph.

Six Flags will be adding another S&S 4D FreeFly coasters to the chain in 2019, this time to Six Flags Discovery Kingdom, where it will be tucked in nicely near the park’s Harley Quinn Crazy Coaster and Joker coaster.

Taking a page out of the Cedar Fair playbook, Six Flags America will convert the former Apocalypse stand-up coaster into a new B&M Floorless coaster for 2019. What is interesting here is that Apocalypse was formerly known as Iron Wolf when it was first build at Six Flags Great America in 1990, where it was the very first coaster to come off the assembly line from Bolliger & Mabillard. While the Stand-Up coaster design is no longer a popular choice, it will be nice to see the very first B&M coaster still up and running 29 years later.

Six Flags is not only taking over the operations of Darien Lake, but will also rebrand the park as Six Flags Darien Lake. This will take place in 2019, along with the addition of the tallest ride in the state of New York. It will be a new Funtime Star Flyer from Ride Entertainment, the 24-story tall Six Flags SkyScreamer.

Six Flags also announced that they will add two more Giant Loop rides from Larson International; Chaos at La Ronde and the Lone Star Revolution at Six Flags over Texas.