The Mack family had been wanting to build a flying theatre at Europa-Park for several years. Opened on June 3, the Voletarium is worth the wait and, when it comes to theming, the Macks have surely outdone Disney.

The Voletarium is the largest investment in a single attraction in the history of Europa-Park.

Despite the long conception period, “Project V” – as it was referred to until the official name was made public this spring – was constructed on site in just nine months. It’s now the first big attraction guests encounter when passing through the front gate of the popular park in Rust near Freiburg, Germany.

Incorporating a storyline involving the fictional Eulenstein brothers and their dream of flight, it’s part of a wider Adventure Club of Europe (ACE) narrative which will be extended to several other Europa-Park attractions over the coming years.

Michael Mack, Europa-Park’s CEO, has already gone on record as saying that the flying theatre as a genre represents “one of the most exciting attractions in the world.” As Managing Director of the park but also founder of MackMedia, he was closely involved with the creation of the Voletarium, which takes guests on a four-and-a-half minute flight over 15 landmarks and landscapes from 11 European nations.

“The Voletarium is without doubt the most complex project I have brought to the world in my life so far,” notes Mack. “But, above all, it’s something very special for me because it combines my two passions: mechanical engineering and filmmaking.”

With only Futuroscope and Ferrari Land at PortAventura World so far having opened such an attraction in Europe, Europa-Park’s new addition will provide many guests with their first taste of such a media-based experience. In anticipation of its popularity, the park has created a queue line 70 minutes in length. The Mack family was keen that guests should be immersed in the story long before they step onto either one of the two 70-seat i-Ride installations (by Brogent Technologies) at the heart of the attraction. 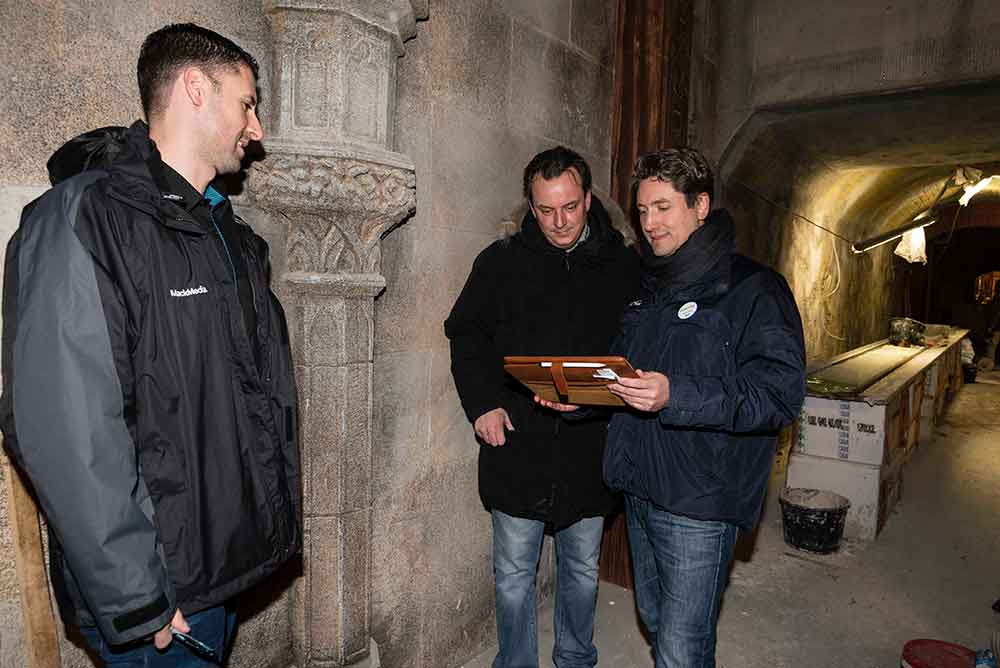 “I remember my first Project V meeting with Michael Mack,” says Chris Lange (above right), Creative Director at Mack Solutions. “We noted that Disney had the best flying experience [with Soarin’] but the queue line basically offers no experience. It is just graphics on a wall and a small pre-show. With the Voletarium, we didn’t want people to queue for over an hour just to go on a movie that lasts 4.5 minutes. That’s why we wanted to create a complete experience where the queue line is almost like an attraction in its own right.”

Housing two domed screen theatres, as well as that extensive queue line, the Voletarium has a footprint of 40 x 62 metres and is 20m at its highest point. That makes it the largest show building in Europa-Park.

“When the building application was put in last May,” Lange remembers, “I basically claimed all the space I could. We did not know at that time what the story was going to be. However, I wanted as much scope as possible to tell it.” 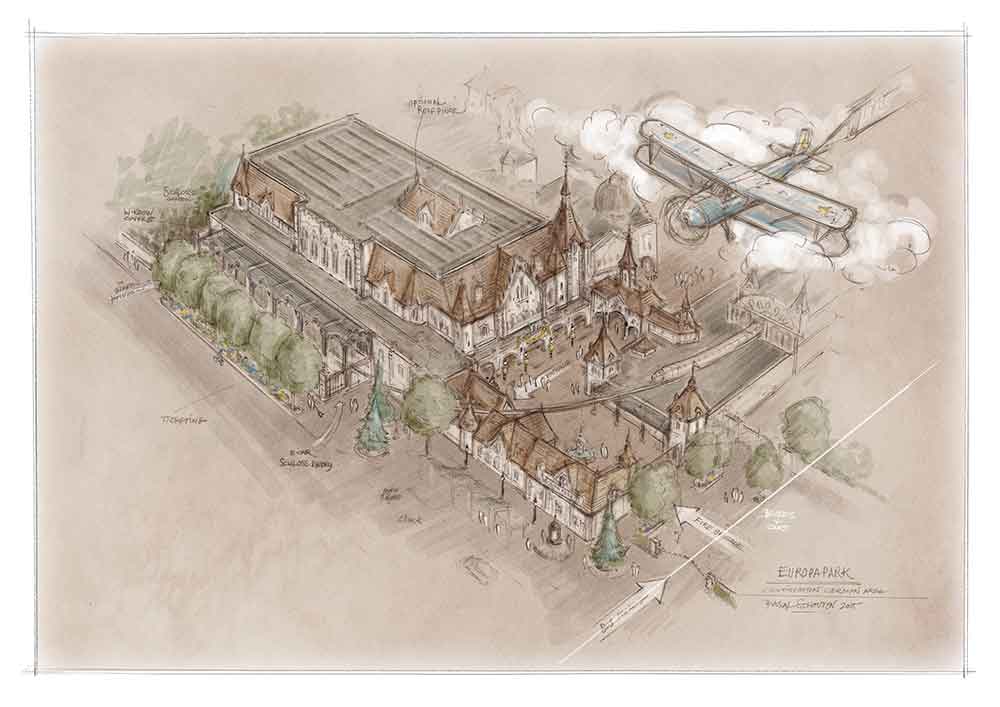 During the research phase, the project team became very aware of the human fascination with flying. In researching national aviation pioneers, Konrad Lorenz as well as siblings Alexander and Wilhelm Humboldt became important sources of inspiration. It was Lange who came up with the idea of the eccentric Eulenstein brothers. According to the story he created, they constructed their first flying machine before the Wright brothers, in 1825.

Elder brother Eckbert Eulenstein was a mechanic and watch maker from the Black Forest. In the queue line, guests see his workshop with a cuckoo clock hanging on the wall. Kaspar, meanwhile, is in love with nature; obsessed with birds and anything that can fly. Together they combine their passions to create a flying machine inside the Voletarium. Themed as an institute and research centre, visitors see sketches, books and various mechanical props.

“It’s like time is frozen,” explains Lange. “We wanted to give guests the feeling the brothers could walk in at any time. When you enter you see a painting of Eckbert and Kasper. Later there is a hologram of Eckbert jumping around in his office.” 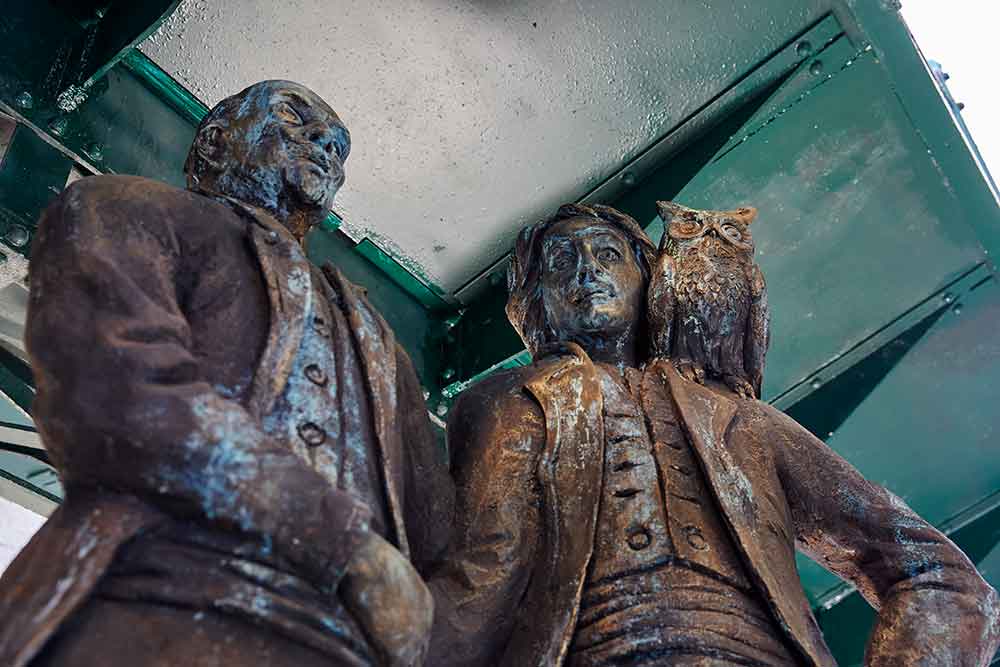 Though set in the 1800s, a lot of modern techniques are employed to bring the storyline to life. The hologram is achieved using CGI animation and a classic Pepper’s ghost effect. Meanwhile projection and a talking drone are employed in a scene looking out on Kaspar’s garden. In the final pre-show before passengers board, a holographic character can be seen delivering a safety video.

Brogent was chosen to deliver the ride system, its second in Europe alongside Flying Dreams at Ferrari Land, after two-years of research and negotiation with different vendors. Using two theatres, it provides an hourly capacity of 1,400.

“We think the i-Ride system from Brogent gives you the best simulation of flying. This is because each 10-seat gondola has a full 6-DOF motion base behind it,” explains Lange. “Inside each of the theatres there is seven gondolas: three on the top floor, three in the middle, and then one on the bottom floor. On not-so-busy days in the park, we can shut off one theatre. Or if we have a small group of VIPs, we can operate just one or two gondolas. This flexibility allows us to save on staffing, operational and maintenance costs.”

The ride film by MackMedia was directed by Holger Trappe, with Michael Mack acting as producer. Footage was captured over a six-month period (September to March) using helicopter and drone. Everyone on the Project V team, which also included Patrick Marx and Armin Hänssel, had favourite European locations they wanted to see featured in the film. In the end the selection came down to both geographic and practical considerations. 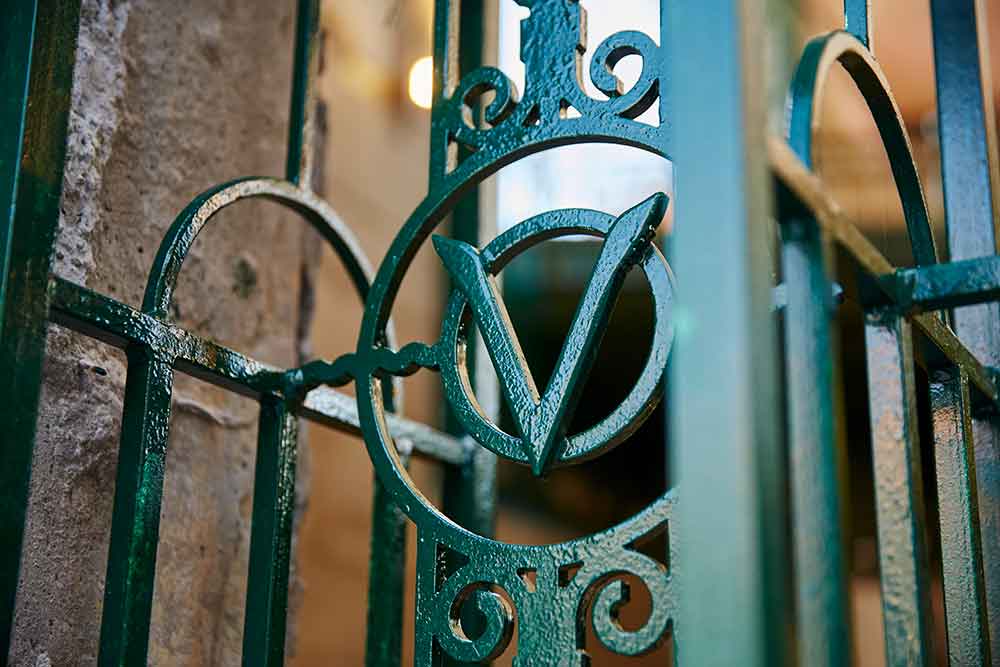 Flying over the European parliament

“It was quite challenging getting all the necessary filming permissions,” recalls Lange. “Nowadays it is almost impossible to fly low enough over many cities to get the kind of footage that looks spectacular in a flying movie. In Strasbourg we were lucky enough to fly over the European parliament building. That is something that they have never given permission for previously.

“But because the Mack family knows a lot of local politicians and is such a strong employer in the region, many people living in that part of France are working at Europa-Park; they wanted to make it happen for us. Other shots where we couldn’t get permission, such as the Eiffel Tower, or where the weather was bad or we went too late in the year, like Castle Neuschwanstein, we animated or enhanced with CGI.” 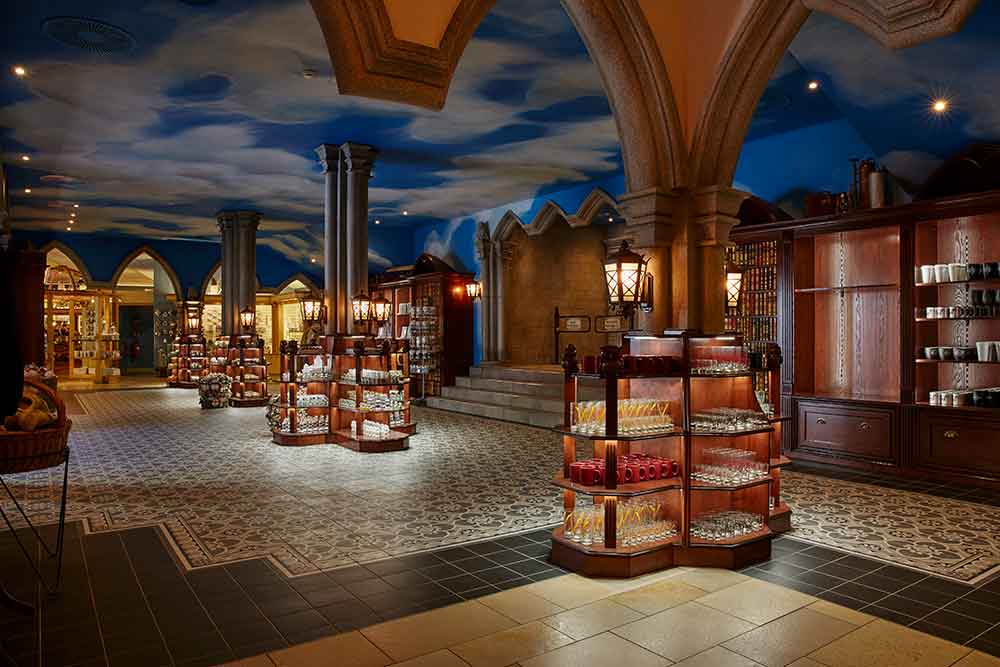 As well as the above, locations featured in the film include Iceland, The Netherlands, Plobsheim in France, the Matterhorn and Aletsch glacier in Switzerland, La Mancha in Spain, Venice and the Italian Alps, Kornati in Croatia, Schönbrunn Palace in Austria, Preikestolen in Norway and Europa-Park itself.

Many of these are classic landscapes. Give or take a bit of climate change, they have changed little in appearance over the years. The cities, of course, have evolved since the 1800s (perhaps only marginally in the case of Venice). This puts the ride film somewhat at odds with the Voletarium storyline. So too does the incorporation of the ride’s sponsor, Eurowings. However, the airline’s offer to wrap an Airbus A320 in Europa-Park branding and fly it around the continent for two years was clearly a marketing opportunity too good to miss.

“At the moment, Eurowings are running some sort of steampunk/retro advertisements so it kind of works,” says Lange. “As the Voletarium is an attraction about flying, working with an airline was the closest fit we could wish for in a a sponsor.” 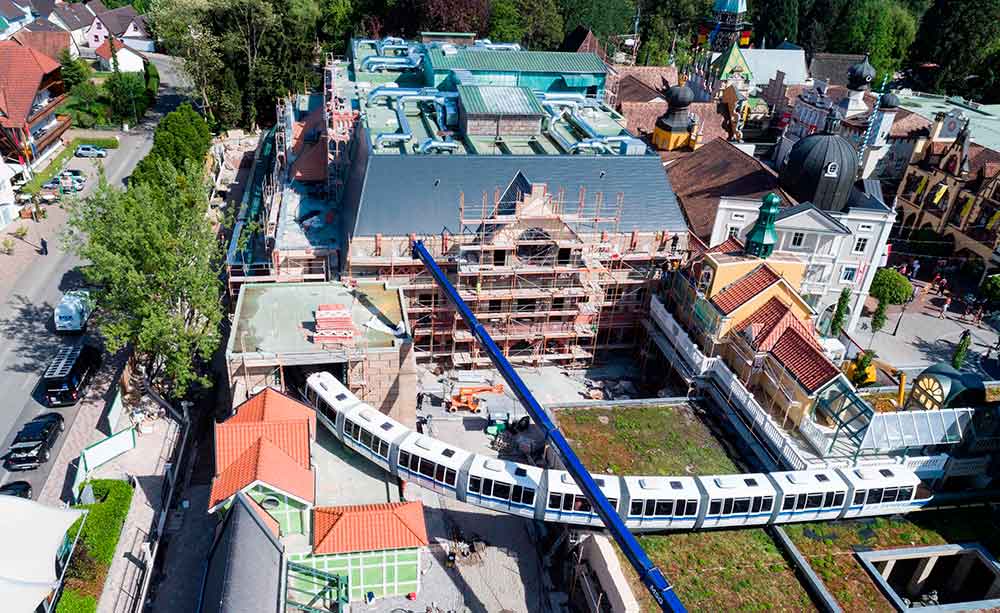 Another link with the present day comes when the EP Express monorail passes through the show building. In fact, it’s part of the pre-show. Lange says, “The monorail goes through the first show space, which is dedicated to the dream of flying. We also have a VIP lounge presented by our sponsor with some modern aircraft windows. I wanted this area to have something to do with innovation, and the monorail looks quite futuristic.”

The Voletarium is located immediately to the left of Deutsche Allee, the German-themed street. All non-hotel guests pass through here on arrival at Europa-Park. Thanks to its themed facade, it looks like it’s always been there. Yet the EP Express had to be re-routed before construction could begin last autumn.

“We had to create a bigger curve for the monorail. It now travels out towards the village on the border of our property,” explains Lange. “The village was pretty involved in giving us approval for the building facades. On the opposite side of the street is a hotel. When the guests open the windows in the morning they want to see something nice. It is the same on the other side, where we have Castle Balthasar.

“We have a lot of weddings and events there, and the guests when they look through the castle gardens like to see something historic. That’s why we had to theme all four sides of the building. Normally with such a big show building you would probably just theme the front and sides, the rest would just disappear backstage.” 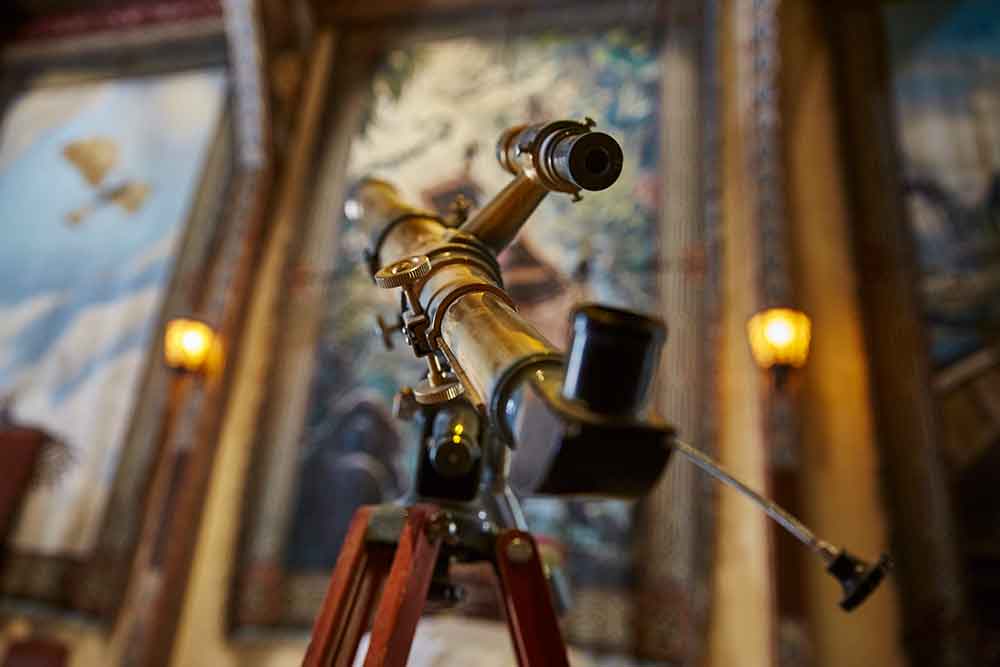 Replacing a bus parking area, the site for the attraction was chosen in order to reinvigorate the German area of the park. Naturally, Deutsche Allee is busy in the morning when guests arrive, and again late in the afternoon when they leave. Now it should throng all day long.

Voletarium is the first attraction on which Europa-Park has implemented a timed ticket system. The goal is to encourage riders to return later in the day. Just as with Disney’s Fastpass, it uses printed tickets and is free to all guests.

As they wait for their pre-booked slot, visitors will be free to enjoy other adventures inside Germany’s busiest theme park. With 5.6 million visits in 2016, it’s still about 4 million ahead of its closest national competitor, Heide Park. A significant contributor to Europa-Park’s success is the role its five on-site hotels play in generating overnight stays and increased spend per head. When a sixth hotel opens alongside the upcoming Water Adventure Resort in 2019, guests will find the Adventure Club of Europe storyline and characters woven into the theming there too. Sure does sound ACE. 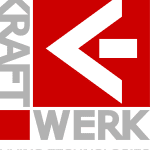