Now many museums are getting in on the act too. VR and AR technology lend themselves well to a museum setting, allowing exhibits to come to life.

VR is a popular addition to many theme parks and FECs – from dark rides to immersive gaming. And the popularity of AR shows no sign of slowing down either. But this technology is also used in museums around the world too. Museum VR and Museum AR can enhance exhibitions and displays. They can add extra information to exhibits, or help concepts come to life. Here’s a roundup of some of the most exciting new uses of VR and AR in museums.

Museum VR at the Franklin Institute

The Franklin Institute in Philadelphia has been offering a range of museum VR experiences since 2016. Visitors to the museum can enjoy new worlds and immersive films. It offers both an HTC Vive experience and an Oculus Rift experience.

Museum-goers using VR at the Franklin can explore the deep sea and encounter a blue whale. They can also journey to outer space or even take a look at the inner workings of the inner body. With the HTC Vive, visitors can walk around and immersive themselves. With the Oculus Rift, they can sit back and let themselves be transported.

The museum VR is not just available in person either. The Franklin has made a range of content available online. This means that users can download the app and strap on a VR headset at home. 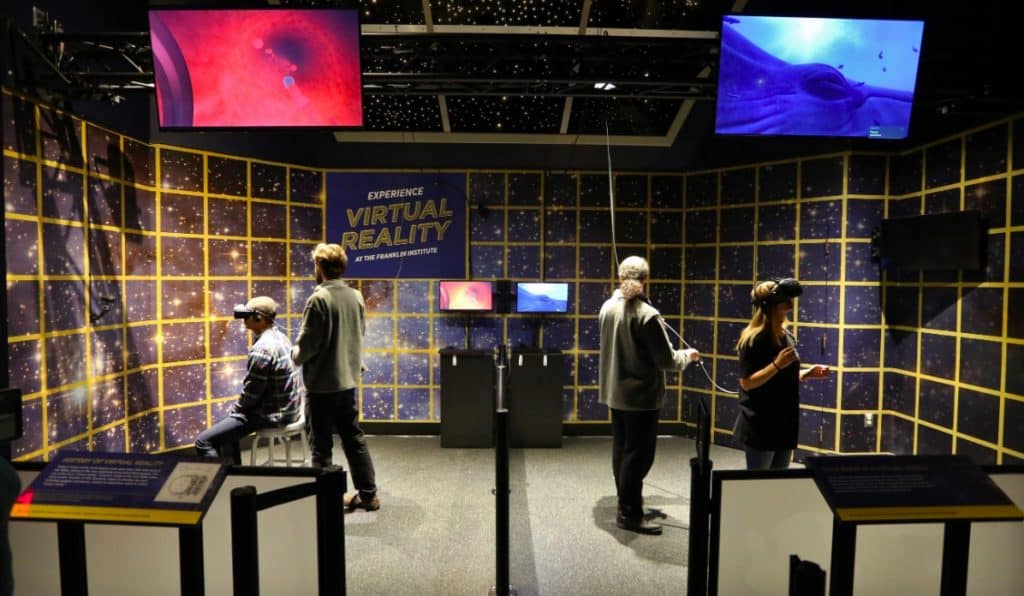 Experiences available through the app include a space shuttle flight deck and an encounter with Hawaiian monk seals. Users can take a walk on the beaches of Midway Atoll or journey aboard the bridge of a research vessel. The app also includes an AR scavenger hunt for fun inside the museum.

Museum AR is often used to add extra layers of information to existing works of art. However, this exhibition was 100% digital. The idea was to produce an immersive AR experience, where images appeared in a previously empty space.

The installation involved a series of digital images depicting a number of species. Uncanny 3D models featured creepy-crawlies, jellyfish or cryptic signs. The artist purposely interacted with the architecture of the building. She used the art to transform it. For example, a 49ft tall jellyfish-like structure, ‘Terrafish’, took over PAMM’s hanging gardens. It was similar to a non-native species currently populating South Florida waters.

One of the intentions of the exhibition was to make visitors feel like they had been transported to a future version of the building. One where it is overrun by invasive species. The artist used the installation to discuss climate change and the fragility of the ecosystem.

Hacking the Heist with Museum AR

In March 1990, thieves broke into the Isabella Stewart Gardner Museum. They stole 13 invaluable masterpieces, valued at over $500 million. 29 years later, the crime is still unsolved. The frames hanging in the museum remain empty.

Until now, that is. Using AR, technologists from Cuseum have placed digital versions of some of the missing artworks into the empty frames. The project helps to raise awareness of the heist. It also gives visitors the opportunity to experience the missing pieces for the first time since the theft.

Cuseum wanted to help visitors see what is no longer there. It used Apple’s ARKit to make the project a reality. After several on-site tests and experiments, it was ready to reveal the result to the world in March 2018.

The project initially focused on two pieces by Rembrandt. These were A Lady and Gentleman in Black and Christ in the Storm on the Sea of Galilee. It intends to add more of the stolen works to the project in the future.

A statement on the project website reads, “We hope projects like this inspire people to think of how art and technology intersect, how precious our world’s culture is, and how fortunate we are to have institutions that preserve, protect, and make works available for the public to enjoy.” The museum is offering a $10 million reward for information leading to the artworks’ recovery.

Guru, a creator of mobile experiences for attractions, recently worked on a new project for AR in museums. At the Dali Museum, guests can use an interactive AR mobile app to explore the artists surrealist works. The AR overlays on top of the artwork to look at certain themes. ‘

VR can be a useful tool for museums to share content around the world. For example, the Metropolitan Museum of Art in New York holds one of the finest collections in the world. However, not everyone is able to visit in person.

The Met 360 project is an award-winning series of six short videos. These invite viewers around the world pay a visit to The Met without leaving their homes. They explore the museum’s art and architecture in a new way. The 360° technology immerses guests in some of the museum’s most iconic spaces. It allows them to explore its art and architecture in a new way, from a fresh perspective.

Those who struggle with crowded galleries can now enjoy the experience of standing in the empty space after hours. Almost as if they are having their own private viewing. The VR videos also feature time lapses and bird’s eye views. “We strung cables, removed protective covers from works of art, and rigged cameras up high. All to allow viewers to explore The Met as never before,” says the museum.

The six videos explore the Great Hall, The Met Cloisters, The Temple of Dendur, The Met Breuer, The Charles Engelhard Court and the Arms and Armor Galleries.

Blasting off with Museum AR at the Kennedy Space Centre

Museum AR can help people to better comprehend historical events. For example, the Heroes and Legends exhibit in the Kennedy Space Centre uses an AR experience to bring a key moment to life.

The second ever spacewalk took place in June 1966. The astronaut who performed it, Gene Cernan, later referred to it as the ‘spacewalk from hell’. During the procedure, Cernan’s spacesuit started to malfunction and overheat. This caused him to spin, his visor fogged up, and he was unable to see.

Visitors to the museum can view the actual Gemini 9 space capsule, outside of which the spacewalk took place. Using AR technology, the museum allows them to look through a screen to see a hologram of Cernan superimposed over the capsule. This puts the ordeal into context. As a result, visitors can watch the spacewalk taking place, as the astronaut himself describes the experience through a voiceover.

The Jinsha Site Museum showcases the archaeological site of Jinsha, which was discovered in February 2001. It is located in Chengdu, China. Around 3,000 years ago, it was the capital of the ancient Shu Kingdom. People would gather here to pray and bring offerings. The site covers five square kilometres and dates from between the 12th Century BC and the 7th Century BC.

When they unearthed the site, archaeologists found over 5,000 gold, jade and ivory artefacts. Visitors to the museum are now able to use AR to view them. They can download an app to explore the items, which shows how they look in 3D. The app also provides more detailed information about the objects and what they were used for.

Amongst the artefacts highlighted by the AR experience are a gold mask and a gold foil totem. The mask appears to float up and spin in front of the visitor’s face, giving them an intimate look at it in detail. 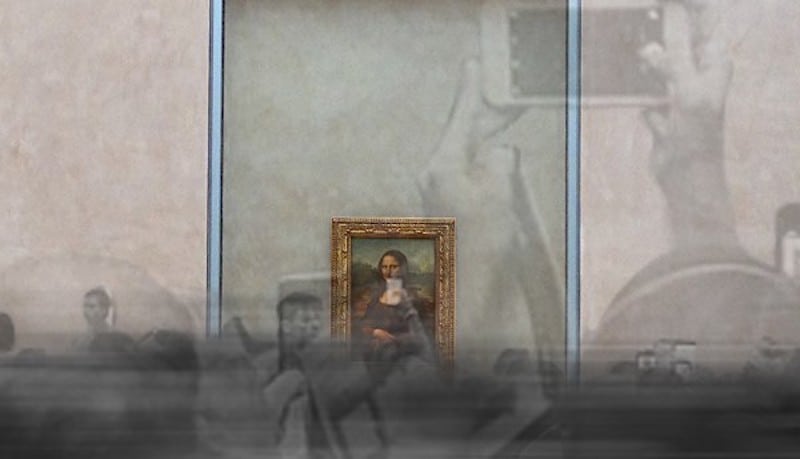 Up close and personal with the Mona Lisa

The Mona Lisa is undoubtedly one of the most famous images in the world. Yet, a visit to the painting in person can be underwhelming and fraught with crowds. Over 20,000 people view the painting every day. The museum keeps it at a distance, behind protective glass. Now, a new museum VR project is letting visitors see this iconic painting in a new way, face to face.

This is the first VR experience at The Louvre and is a collaboration with HTC Vive Arts. Mona Lisa: Beyond the Glass brings the painting and its story to life. It is a part of the museum’s Leonardo da Vinci exhibition. 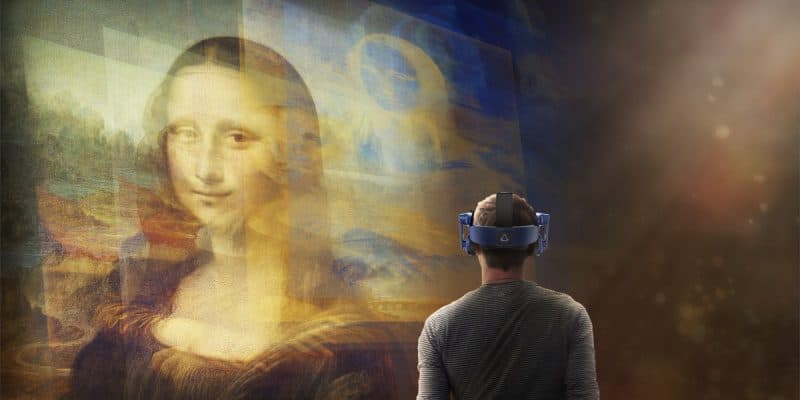 Mona Lisa: Beyond the Glass lets viewers explore details invisible to the naked eye. This fresh way of viewing the painting will give the public a new insight. It reveals more information about the painter’s techniques, as well as the identity of his sitter.

According to the museum, “Visitors will have the rare chance to be immersed into the world’s most iconic painting, stepping behind the glass to access the intriguing portrait up close in an entirely new, transformative way.”

“The public will be able to discover an immersive experience of an extraordinary masterpiece,” added Dominique de Font-Réaulx, Director of Mediation and Cultural Programming at the Louvre. 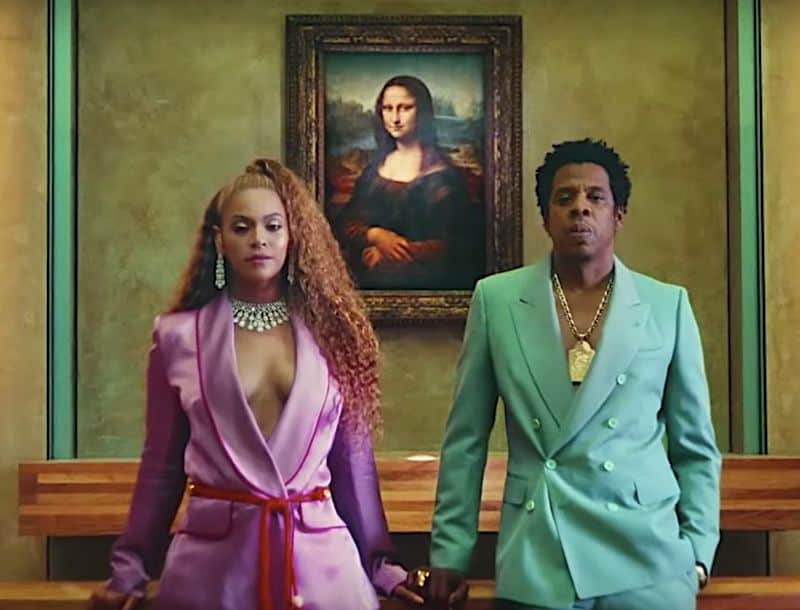 Flying with dinosaurs thanks to museum VR

People have always been fascinated by dinosaurs, despite the historical distance that separates them from us. However, museum VR could close that gap and help to bring dinosaurs to life. At the start of 2019, Cincinnati’s Museum of Natural History & Science launched a new VR experience. The VR exhibit, Jurassic Flight, allows visitors to explore prehistoric skies and interact with dinosaurs. During the experience, guests can embody a pterosaur, Kepodactylus. Then they will fly amongst the dinosaurs who roamed the Earth during the Jurassic period. Users have a unique opportunity to enjoy a dinosaur flight that takes them back 150 million years.

There is even one museum which consists entirely of virtual content. The Kremer Museum does not exist as a physical building. Instead, its collection of 17th Century Dutch and Flemish old masters are only available to view as an online VR experience. The above examples show that museum AR and VR can be used in a variety of innovative ways to enhance the visitor experience. In addition, museum AR is a useful tool for adding information and exploring topics in greater detail. It can also put key items and events in context. VR can be a new way to bring exhibitions to life. Museum VR immerses the visitor in another reality and allows them to take a journey further into the topic. It can also help a museum to be more accessible and reach more people outside its own walls.