A museum dedicated to the Irish rock band U2 would become a major new tourist attraction for Dublin, Ireland.

The museum is set to be built on the site of the band’s recording studio in Dublin’s docklands.  Plans are at an advanced stage with a planning application about to be lodged.

The plan is to build a four-story cantilevered building that will overhang the River Liffey.  Its aim is to recreate the band’s greatest hits and spotlight their social impact.  It will also exhibit items that celebrate their 40-year history.

U2 is one of the most successful bands in the world.  They have released 13 studio albums and sold more than 170 million records worldwide.

The band has won 22 Grammy Awards, more than any other band.  In 2005, the first year they were eligible, they were inducted into the Rock and Roll Hall of Fame.  Rolling Stone magazine placed U2 at number 22 on its list of the “100 Greatest Artists of All Time.”

However, despite U2 being one of Ireland’s most famous exports, there are no physical monuments to the band or its achievements in Ireland. 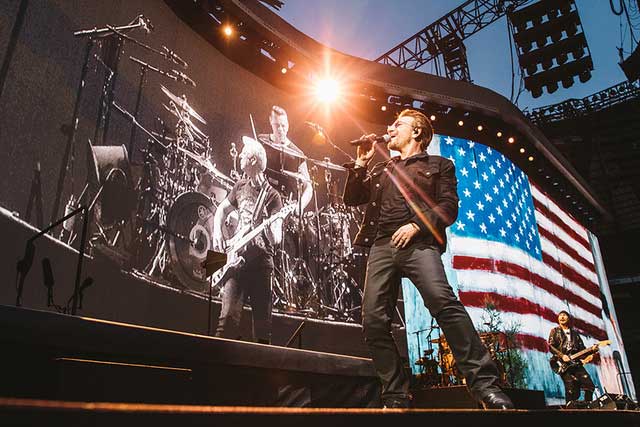 The band was formed in 1976. Larry Mullen, then 14, pinned an ad on the notice board of Dublin’s Temple Mount School, saying “Drummer seeks musicians to form band”.  The four teenagers – Larry, Adam Clayton, Paul Hewson (Bono) and David Howell Evans (The Edge) – originally called themselves Feedback.  They rehearsed in Larry’s Dublin kitchen.  The band then changed name to become The Hype, before settling on U2.

Their first single was released in May 1980 with their debut album Boy, being released five months later.  By May 1983 they had their first UK number 1 album with War (which featured hit single New Year’s Day).

The band are known as philanthropists as well as musicians.  Bono, in particular, has campaigned for human rights worldwide. He is particularly famous for his campaigning for Africa and for fighting AIDS worldwide.

The band is currently on a world tour to mark the 30th anniversary of their most successful album The Joshua Tree.  They perform the entire album at each show.  The stage features what may be the largest and highest resolution screen used on a concert tour – a 7.6K screen that measures 200 ft x 45 ft.

Images courtesy of U2.