Triotech, the award-winning creator of media-based attractions, has launched a new VR game at IAAPA Expo 2019 in Orlando, called the Storm.

Triotech is proud to unveil its latest product, the Storm, which is a unique interactive VR coin-op game. This follows the success of the company’s previous coin-op simulators, the Typhoon and the Mad Wave Theatre, which are both player favourites in FECs and arcades all over the world.

The Storm features two players who compete with each other while sitting side-by-side on motion seats. “What is unique about the Storm is that it is interactive VR but guests do not hold a controller, they play by moving their hands and arms around,” says Ernest Yale, Founder, President & CEO of Triotech. “It’s not only a thrill ride but also a side-by-side competition which players always enjoy.”

In a world-first for coin-op VR games, players on the Storm do not hold a controller. Instead, they interact by simple hand and arm motion. To have device-free interactivity in a VR coin-op simulator is a unique innovation. The game also features wind effects and motion, as well as exclusive content developed by the company.

Triotech is currently exhibiting at IAAPA Expo 2019 in Orlando, Florida, and the team can be found at booth #1954, where attendees can try several of the company’s leading products for themselves. IAAPA Expo is the industry’s premier event for the attractions industry and features a huge trade show floor as well as educational sessions, networking opportunities and social events.

Earlier at the show, Triotech announced that it will be bringing back a fan favourite ride at Knott’s Berry Farm for the park’s 100th anniversary, and updating it for the 21st Century. Knott’s Bear-y Tales: Return to the Fair is a new 4D interactive dark ride that reimagines the iconic attraction and it will be coming to the California park to mark its milestone anniversary next year. 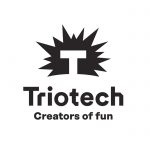