“The total calorie consumption of our products equals walking around the world a whopping 145 times!” says Valo Motion founder and CEO, Dr Raine Kajastila. It’s also the equivalent of burning off over 128 million slices of pizza!

The first gaming platform of its kind, ValoClimb systems turns ordinary climbing walls into large interactive surfaces. As they scale the wall, climbers experience projected graphics, game effects and fun challenges. Systems have been installed in facilities ranging from activity parks to gyms and fitness centres. And now, after 383,000 hours of gameplay on ValoClimb, players have saved the planet from 17 million virtual asteroids while getting fit. 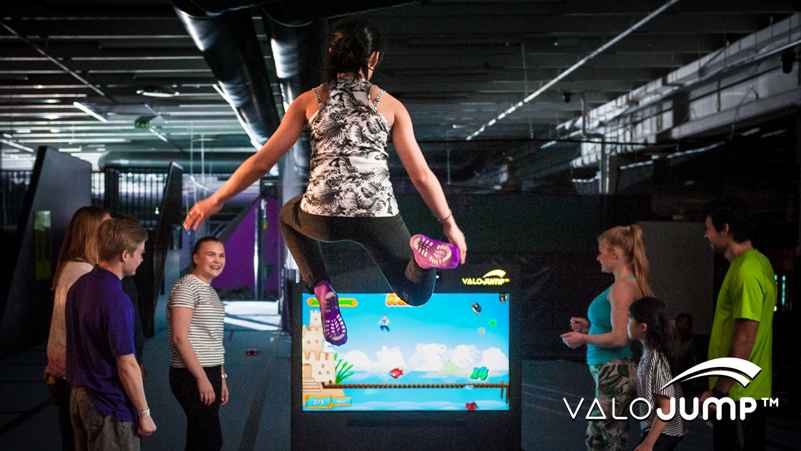 ValoJump provides athletes and gamers with another fun and unconventional way to exercise. The interactive game platform invites participants to bounce on a real trampoline as a virtual version of themselves appears on screen in front of them. In the game world they enjoy fun challenges, learn new tricks and training tools. They can also compete against others in the world’s first two player game for trampolines.

“Wall climbing and trampoline jumping are both great exercises, but ValoClimb and ValoJump make them more fun and more efficient because of their competitive nature,” says Kajastila. “Players are happy for action filled and fun exercise and location owners get a lot of customers in to play our games. It’s a win-win situation.”

Based in Finland, ValoMotion has installed its augmented reality fitness products in more than 200 locations in over 45 countries. Together they generate nearly one million monthly game sessions. Each system combines the physical climbing wall or trampoline with ValoVision tracking software and high quality games/applications.

Calorie consumption calculations are based on an 83 kilogram male (184 lbs) using research results from Harvard Medical School and American Council on Exercise.