The “XI Gallery” in New York’s Meatpacking District is home to a hybrid art installation. The most prominent work is a 33-ft wide model of Lower Manhattan. It is made of more than 10,000 miniature 3D-printed and hand-cut buildings. Known as The Egg, the artwork is brought to life with projection-mapping.

Es Devlin is the artist behind The Egg. She is renowned for her stage design artists such as Beyoncé and Kanye West. She designed an Olympics closing ceremony, and most recently a projection-mapped story at the Cannes Lions Festival of Creativity.

Devlin’s Manhattan is warped and fitted inside a quarter ovoid shape. It uses relative scaling tricks to force a unique perspective of the cityscape. 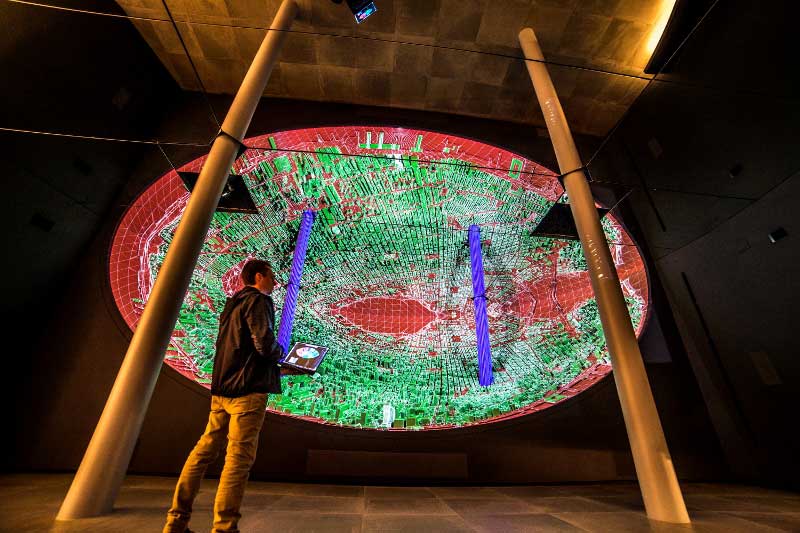 Ken Showler, Experience Director at 7thSense Design, said, “It takes a team with a lot of respect for accuracy to get a clean mapping result on an object this detailed. A little ‘off’ in the 3D model goes a long way. DBox and Farkas Falop have done an amazing job producing this model and content, positioning TechWest and my crew to produce an alignment we are proud of. Very little traditional 2D pixel warp was used beyond the 3D calibration stage here, and so the accuracy of 3D parallax was minimally compromised.

The science behind The Egg

“Blending projectors is also a significant challenge on a model like this. For each given pixel of the 3D surface texture, there are a bunch of factors that should drive the decision of how much light is best to take from each projector, to achieve a uniformly lit result using the best quality available pixels. Some model surfaces have one projector hitting them, while others have two, three, or four.

“Each lens will be a different distance from each given surface, and each lens may have a different field of view, resulting in differences in brightness across the model. Each lens also has a depth of field, and an incident angle at which it hits each given surface, resulting in brighter and less smeared pixels on one surface versus the next. This decision process is managed by an emerging Autoblend tool that will become available officially with our next generation software release. We used an early implementation of this on The Egg with great results.”

Since 2004, 7thSense has been designing and manufacturing media serving technologies that bring displays and experiences to life with advanced media management and playback of high resolution, high frame rate, high bit-depth media onto any shape or size display or object.

7thSense solutions can be found in thousands of installations worldwide. Chosen for many of the world’s most challenging and complex displays from theme parks and digital planetariums to large-scale projection mapped buildings and live events, the award-winning Delta Media Server range of solutions can take any media onto any display surface with the greatest dependability and the very best results.