These are just waiting for hard-core fans of the sweeping space opera saga to discover them.

We’ve scoured Dok-Ondar’s Den of Antiquities for 20 of our favourite Easter eggs. The souvenir shop is now open at Star Wars: Galaxy’s Edge in Disneyland in California. It also opens on August 29th at Disney’s Hollywood Studios. The creative teams at Walt Disney Imagineering and Lucasfilm wove Star Wars relics, historic callbacks and inside jokes into the upper level of Dok’s Den.

Dok’s vast collection helps inform and support the backstory developed for the shop in the Black Spire Outpost. The village, on the Star Wars planet of Batuu, is the setting for the new 14-acre themed lands. An audio-animatronic Dok presides over the shop. He tends to his financial ledgers, answer calls and surveys his inventory while sitting at an elevated desk. The mysterious Ithorian collector and trader has eyes bulging from the side of his hammerhead. He also has two mouths in his curved neck. Dok-Ondar traffics in intergalactic black market goods.

Every inch of the shop reveals hidden secrets and Easter Eggs, planted by Imagineering and Lucasfilm. It’s up to hard-core Star Wars fans to find them all. Here’s a tip sheet for getting you started on your Easter egg hunt at Star Wars: Galaxy’s Edge. 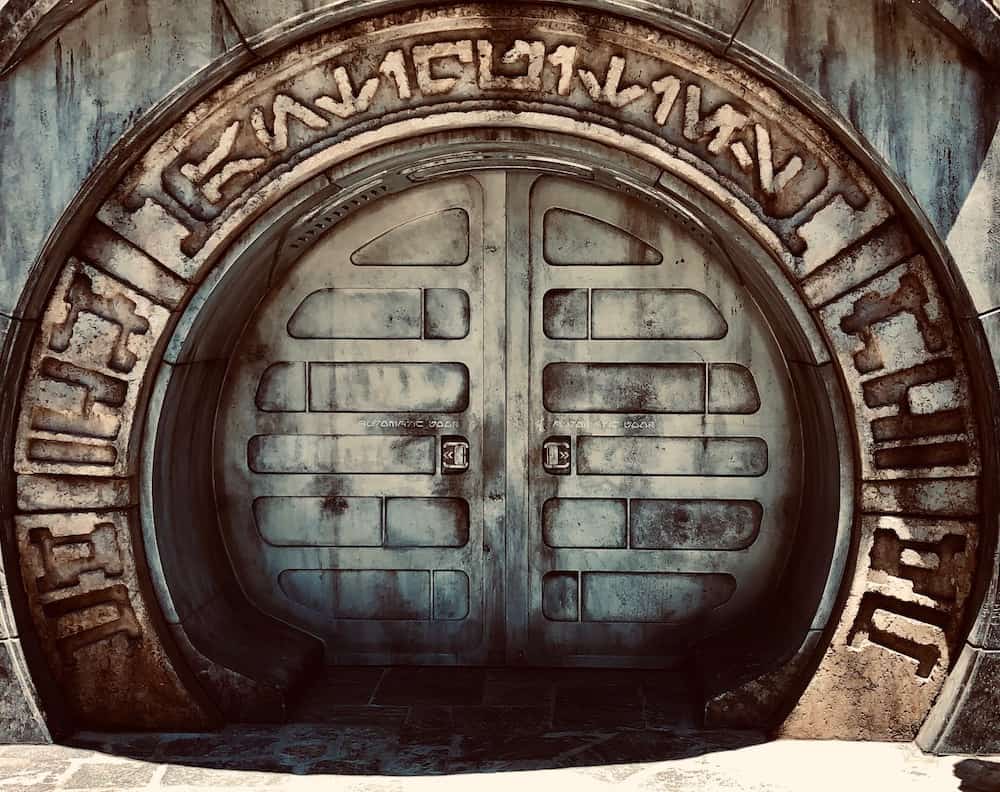 1) Ark of the Covenant

The most asked about item in Dok-Ondar’s Den isn’t even a Star Wars item. The holy relic sought by Indiana Jones in “Raiders of the Lost Ark” is very hard to find on the upper level of Dok’s shop. You’ll have to ask a shopkeeper to point it out.

A golden Gungan statue is barely visible on the upper level of Dok’s shop. It looks like the most-despised character in the Star Wars universe. Ask a shopkeeper for help finding the bumbling sidekick from “The Phantom Menace.”

The Z-6 jetpack worn by the bounty hunter is hard to spot on the upper level of Dok’s shop. Ask a shopkeeper for help finding it. The jetpack provides lift and an optional rocket-firing missile. 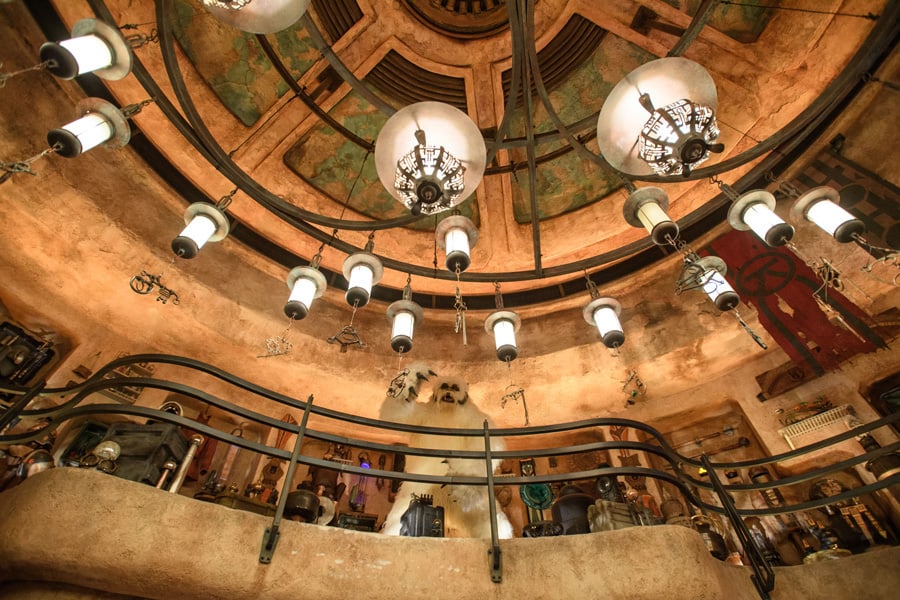 The 12-foot-tall taxidermied Wampa is one of the easiest and coolest items to find. It’s on the upper level of Dok’s shop. A woolly Wampa almost killed Luke Skywalker on the icy Star Wars planet of Hoth.

A specimen of the hairy one-eyed space squid sits in a tank on the main counter of Dok’s shop. A dianoga creature nearly drowned Luke Skywalker inside the Death Star garbage compactor. This is from a scene in the original 1977 “Star Wars” movie. The Galaxy’s Edge comic book series explains how Dok purchased the dianoga from Greedo and Jabba the Hutt.

The tentacled predator is in a case near the entrance to the shop. Luke Skywalker was pushed by Jabba the Hutt’s guards into a Sarlacc pit in “Return of the Jedi.” The Galaxy’s Edge comic book series explains how Dok hired Han Solo and Chewie to retrieve the Sarlaac for his collection. The pink and purple aquatic rodent bobs in a tank in Dok’s shop. The ollopom are native to the Gungan swamps of the Star Wars planet of Naboo. Ollie was a gift to Dok from Hondo Ohnaka, who found the creature in unmarked cargo.

Mounted heads of Star Wars beasts sit above the secondary cashier stand in Dok’s shop. The collection includes a Kod’yok (from “Solo”) and a Tauntaun (“The Empire Strikes Back”). It also features a Nexu (“Attack of the Clones”), Anooba (“The Clone Wars”) and Corellian Hound (“Solo”).

A chrome droid that looks like IG-88 leans against a wall on the balcony of Dok’s shop. The battered war droid turned bounty hunter featured in “The Empire Strikes Back.” It answered Darth Vader’s call to track down the Millennium Falcon and capture Han Solo. Larger items in Dok’s collection sit outside his shop. The statue of a robed woman using the Force to lift an orb was seen in “Revenge of the Sith.” Nearby, the Ithorian gravestone of Dok’s parents bears the inscription, “We Wither to Bloom.”

The multi-panelled artwork just inside the shop entrance tells the story of the great hyperspace wars. These took place between the Jedi and the Sith, according to Laughing Place. The sculpted art appeared in Chancellor Palpatine’s office in the “Revenge of the Sith.” A similar sculpture of Jabba the Hutt can be found in the shop. This featured on the galactic gangster’s sail barge in “Return of the Jedi.” Dok’s collection of antiquities includes several instruments used by Figrin D’an and the Modal Nodes. The alien band played in the Mos Eisley cantina during the original “Star Wars” movie. The instruments in Dok’s collection include a kloo horn and double jocimer. He also holds a bandfill and ommni box.

A collection of weapons is on show above Dok’s desk. The weapons include Han Solo’s DL-44 heavy blaster and Lando Calrissian’s SE-14r pistol. Also featured are Princess Leia’s Defender blaster and Jyn Erso’s A-180 sidearm.

A collection of Imperial trooper helmets sit in an alcove. This is at the top of the staircase leading to the upper level of Dok’s shop. Rebellion and Resistance A-Wing, B-Wing, X-Wing and Y-Wing pilots helmets also line the wall near the bottom of the staircase. 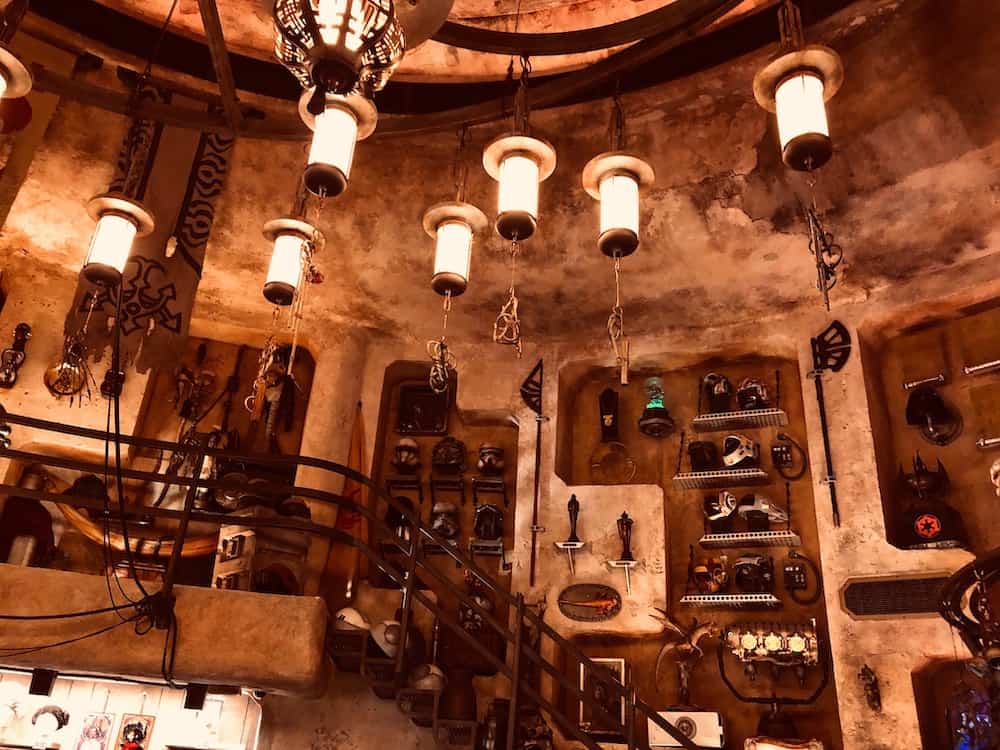 A helmet and two-pronged phase-pulse rifle from the title character in the upcoming Star Wars television series hang above Dok’s desk.

A pair of the melee weapons, also known as gaderiffi, hang in an alcove on the upper level of Dok’s shop. A Tusken Raider used a gaffi stick to knock Luke Skywalker unconscious in the original 1977 “Star Wars” movie.

Princess Leia wore a helmet like this as a disguise to infiltrate Jabba’s Palace in “Return of the Jedi.” The helmet Leia used belonged to an Ubese bounty hunter named Boushh. These are melee weapons commonly used by Jabba the Hutt’s guards. A trio of them hangs on the wall above the side cashier in Dok’s shop. Lando Calrissian also carried a Gamorrean Vibro-axe as part of his disguise inside Jabba’s Palace in “Return of the Jedi.”

The military decoration hangs on a stand near the staircase leading to the upper level of Dok’s shop. The medal of bravery was awarded to Luke Skywalker and Han Solo by Princess Leia at the end of the original “Star Wars” movie.

Dok-Ondar loans antiquities from his collection. He uses the documents to detail the missing items, according to Polygon. Expect the unfilled spots in Dok’s collection to feature props from the upcoming “Star Wars: The Rise of Skywalker” film, in the future.