YRD region is strategically positioned to become the international gateway in China; global center for modern services (finance/banking) and advanced manufacturing industries; and strongly competitive world-class metropolis.  YRD has been one of the most active economic zones in China – its GRDP (gross regional domestic product) reached more than RMB9, 000 billion in 2012 (US$1, 429 billion), representing 17.4% of national GDP.

The six core cities that lead economic development in the area contribute more than 68% of YRD’s total economic output (GRDP).  Shanghai, Nanjing, Suzhou, Wuxi, Hangzhou and Ningbo, are highly urbanized with 70-90% of the total resident population in the urban area. The per capita GDP and disposable income of urban households for these 6 core cities are one-and-a-half times to double the national averages.

The 6 core cities (Shanghai, Nanjing, Suzhou, Wuxi, Hangzhou, and Ningbo) have an estimated total permanent population of approximately 65 million, which is more than half of the YRD region’s population, which totaled  almost 110 million (8% of China’s total) in 2012.

Detailed market analysis of the market for theme park development would require income qualification, however income data for the region shows most YRD urban residents have the capability to support international standard admission prices, while rural residents in the region are rapidly catching up.

In addition to a large resident market base, YRD is also ranked as the top regional tourism market with Shanghai, Hangzhou, Nanjing, Suzhou identified as the major destination cities in the region, according to the recently released report for top popularity of domestic tourism destinations during the most recent holiday period by China’s leading travel booking e-channel, Ctrip (similar to Expedia/Travelocity in the United States).

Aside from the increasing income profiles in the region, strong investment and improvement in the YRD infrastructure and transportation networks also contributed to the rapid growth in regional tourism. The regional market has experienced rapid tourism growth, averaging 10-18% over the past decade (according to official estimates).

The estimates of tourism to the greater region total some 170+ million overnight visits.  Accounting for overlaps of markets, multi-destination visitation, and income qualification adjustments, ECA estimates the potential tourism market in the greater extended YRD region relevant for theme park visitation could total 65 to 80 million unique, qualified visitors.
Robust growth is expected to continue with the opening of Shanghai Disneyland Resort and other large-scale pipeline tourism developments, which will further enhance Shanghai and YRD as a top tourist destination.

Transportation infrastructure in the YRD region is highly developed, providing excellent access within the region as well as to the rest of China through roads, rail and airports. There are 11 airports in the YRD region with passenger throughput of 130+ million in 2013.

The greater YRD region (Shanghai, Jiangsu and Zhejiang provinces) has a well-developed road network with 9, 000 kilometers of highways (2012) that offer direct and convenient access within the region and to major cities in China.  It is also a major hub for railway transportation, interconnected by several High Speed Rail (HSR) and Inter-City express rail lines.

The growth of the region will be further supported by several major infrastructure projects that are currently under planning or construction stage. All of these projects will significantly improve connectivity with cities in the region and the rest of China, further facilitating the movement of residents and tourists, and provide a strong foundation for the continual development of the attractions industry in the region:

With a large population and tourism base, as well as close proximity between several major cities, the YRD is strategically positioned to become a major, extended multi-theme park destination cluster, alongside the other established international theme park hubs, such as Southern California, Central Florida and the up-and-coming Southern Malaysia/Singapore region. Within the YRD, there are three main areas for attraction groupings– Shanghai, Suzhou-Changzhou and Hangzhou.

The YRD is currently home to several major theme parks, water parks and other attractions with a combined theme park attendance of 15-20 +/- million visitors. Comparing theme park visitation to total market size (qualified adjusted resident and tourist markets combined), theme park visits per capita could grow significantly in the next 5-10 years from the recent year’s level of 0.10-0.15 +/-.  With the opening of Shanghai Disneyland (late 2015/early 2016), and new parks entering YRD such as Wanda Group (Wuxi Wanda Cultural Tourism City), this figure is expected to grow to more than 0.20-0.25+ theme park visits per capita over time.

The headline adult admission prices for theme parks in the YRD range from RMB160-230 (US$26.1-$37.6), with most at the RMB200 level (US$32.7).  These price levels are typical of Chinese regional theme parks.  Price levels at Chinese parks are expected to rise significantly over time with the development of new, higher investment, destination theme parks, notably Shanghai Disneyland.

World of Joyland raised its adult admission price to RMB230 (US$37.6) with an increase of 15% in early 2014. The park is adding components to create a destination environment including 4-star hotel, treehouse resort, and a second gate (water park).

A new children’s themed area called DinoBoB was added to Changzhou Dinosaur Park in early 2014, targeting families with children aged between 2 and 15 years old. With a reported investment of over RMB100 million (US$16.3 million), the expansion includes 10+ rides and programs featuring new character and merchandise line. Other recent expansions are targeted to upgrade the park and create a destination including a new gate, new themed Adventure Port area with a new 4D theater, Dino Water Town, retail outlet village, commercial street, entertainment zone, cinema, as well as a 300-room themed family hotel.

The sixth Disney theme park destination worldwide and the first in Mainland China is expected to open in Shanghai in late 2015 or early 2016. Currently under construction, the park will be located in the Pudong New Area, eastern suburb of Shanghai, 12 km from Pudong International Airport. A new metro transit line will be built for the project. The first phase is expected to cover about half of Disney’s property, with future plan to expand the resort to include 2 additional theme park gates. Construction for the first phase broke ground in April 2011.

The Shanghai Disneyland theme park site covers 225 acres (91.5 hectares) and will be positioned as a mega theme park that combines classic Disney characters and storytelling with the uniqueness and beauty of Chinese culture. It will feature the traditional components of Disney theme parks such as Adventureland, Tomorrowland, Fantasyland, Disneyland Railroad, and Thunder Mountain. Additional components of the park could include a “Cars” themed section and Pirates of the Caribbean.  The “Main Street” area will reserve space for an 11-acre park-like space (central hub).

The first phase of Shanghai Disney Resort development is reported to represent an investment of US$4.7 billion/RMB28.8 billion, including the initial theme park development, hotels, and retail, dining and entertainment (RDE) district.  First year attendance target for the park is estimated at 9-10+ million visitors.

The opening of Shanghai Disneyland will represent a watershed event in Chinese theme park industry. As has occurred in other markets where Disney has developed parks, Shanghai Disneyland is expected to act as a catalyst for leisure and tourism development in the region and China.

Theme parks and other tourist attractions can have both competitive and complementary effects on each other. In many cases, increasing the number of attraction and tourism products in an area can spur growth in the industry, expand the market with growing awareness/education, and lead to better products.

Shanghai Disneyland is expected to become the leader in price and quality for theme park attractions in China, which will raise the industry standards and expectation of Chinese consumers.

We expect Shanghai Disneyland will drive key changes in the Mainland China theme park industry, including:

Outside Shanghai Disney and the ITRZ, there are several other notable attraction development destinations in the pipeline in the YRD region:

The YRD theme park market is expected to expand significantly over time and should eventually become one of the world-largest attraction markets. With a large regional resident base, strong tourism, growing income-qualified population, active consumption pattern, and improving infrastructure, we foresee robust growth potential in the market.  The YRD region will grow with existing theme parks being upgraded and additional parks developed by leading domestic and international real estate developers over time. These theme parks could provide conceptual diversity, product innovation and tourism growth to leverage YRD as a leading theme park destination in China. 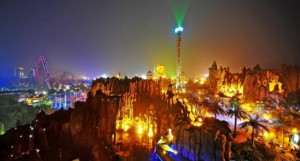