Following the opening of Europe’s first Sesame Street dark ride, creator Sally Corporation has released details of this and two other new interactive attractions it will be launching soon.

From much-loved children’s TV characters to a world of chocolate and a classic ghostly theme, the trio of rides are united by one thing. Like most dark rides they are family-friendly. Here are the new experiences from Sally Corp that will soon await theme park guests on opposite sides of the Atlantic. Launched at the Spanish theme park resort on April 6, this new attraction (as pictured above) represents the first time that Jim Henson’s Creature Shop and Sally Corporation have combined their talents to create animatronic figures for a dark ride.

The attraction is housed inside a newly constructed 1,300 square-metre building inside the SésamoAventura area of the original PortAventura park, which neighbours the newer Ferrari Land.

During a ride lasting almost six minutes, guests get to meet all their favourite Sesame Street characters and shoot at over 200 targets. This is preceded by an 11-minute pre-show. 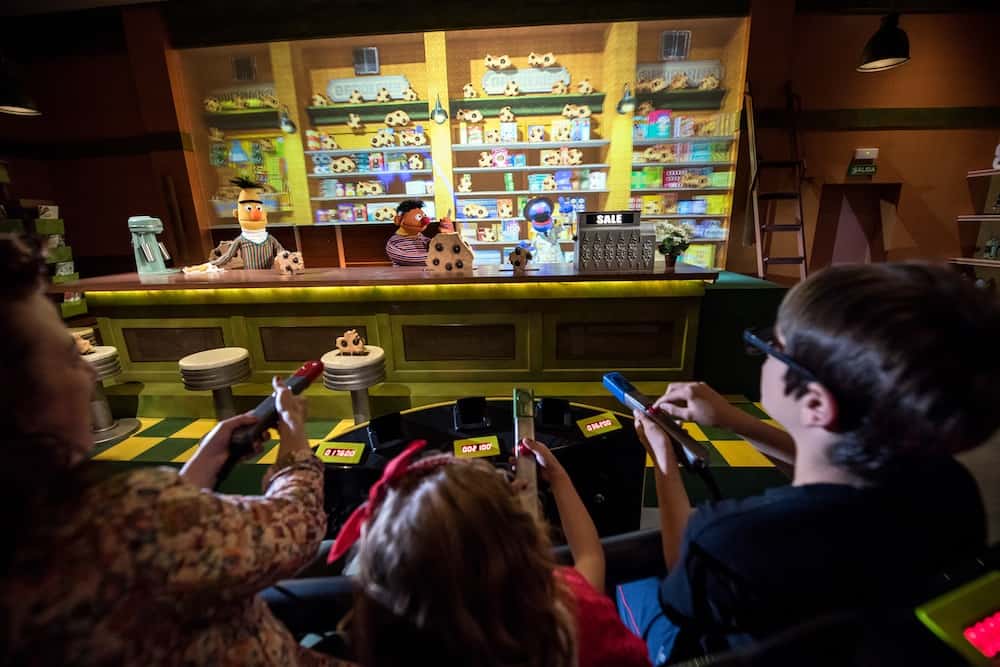 Guiding guests on their interactive adventure is Detective Grover, who urges riders to collect clues to solve a mystery happening on Sesame Street.

As well as numerous animatronic characters and immersive scenery, CGI animation and interactive gameplay are incorporated into several screens. Sesame Street puppeteers’ performances were used by Sally to direct the scenes. In addition, the themed sets are brought to life using projection-mapping techniques. . At the end of the ride, guests see their scores displayed on a Hall of Fame scoreboard.

Opening this summer at the home of Hershey’s chocolate, this new-look attraction replaces Reese’s Xtreme Cup Challlenge. Following a makeover by Sally Corp and experience designer Raven Sun Creative, Hersheypark guests will be able to engage in a fun interactive game as they pass through a futuristic looking chocolate factory in the heart of Reese’s Central.

Riders’ sense of sight, sound, smell and touch will be engaged during the experience as they are challenged to ensure the world is never deprived of Reese’s peanut butter cups. Appointed as Reese’s Agent Trainees, passengers must protect the legendary Crystal Cup to create Cupfusion Energy to power the factory under the guidance of Commander Cup. However, Mint the Merciless and The League of Misfit Candy are never far away, intent to steal the Crystal Cup for their own ‘evil’ purposes.

To encourage repeat play, guests can unlock additional features as they try to beat their score with every ride. The best players are awarded Reese’s Legend status in the Hall of Fame.

Reese’s Cupfusion features the same ride system and building as its predecessor at the park in Hershey, Pennsylvania.

Ghost Blasters at The Park at OWA

A final name has yet to be decided for this new attraction at The Park at OWA in Foley, Alabama. However, the interactive ride will feature a version of Sally’s popular Ghost Blasters concept, which can already be enjoyed in over 10 theme/amusement parks around the world. Pictured here is an installation at Furuvik in Sweden.

OWA’s version will encompass the best scenes and gags from previous Ghost Blasters, plus a few new surprises. Four-seater cars by Bertazzon will take passengers through 13 whimsical and spooky rooms of a haunted mansion. Riders will use ‘boo-blasters’ to rid the mansion of Boocifer and his ghostly legion. During the three-minute experience, riders will come into contact with up to 90 targets. The scenes inside the ride will be rendered in glowing, colourful ultraviolet paint, and brought to life using black light.

“We knew we wanted an indoor attraction, something engaging and fun for families,” says OWA’s director of marketing and PR, Kristin Hellmich. “When we decided on an interactive dark ride, there was no better choice than the specialists at Sally.”

The identity of the dark ride will be revealed at a later date after a naming contest. In the meantime, The Park at OWA has already announced a $100 million expansion including a waterpark and hotel.