This month we look at the phenomenal success of the video game Fortnite. We also highlight the continuing trend for attractions to become multi-day destinations.

By The Park Database

We are firm believers that no matter the era, there will always be demand for social spaces. Likewise, also with places of amusement and festivity.

Amusement parks fulfill this kind of deep need in the physical sense. Furthermore, recently, much has been written about the video game phenomenon that is Fortnite, and one of its defining characteristics as a social gathering space.

The social aspect of video games has been behind their enormous success in recent years, with some games earning revenues on par with entire theme park companies

Video games are reaching maturity, and some games are now as large as entire theme park chains. For example, Fornite’s $2.4 billion in revenues last year is almost as much as SeaWorld and Cedar Fair combined.

All this puts into perspective the outsize success that is Disney. No one is touching them anytime soon. 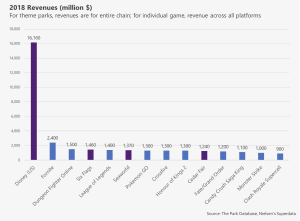 The business model for video games remains a ‘freemium’ one, with most players paying almost nothing to play. We find it fascinating that Fortnite generates roughly the same amount in revenues as the Cedar Fair and SeaWorld theme park chains, combined – but required nearly four times the number of “customers”; i.e. players, to generate such revenues. It is rare that a theme park increases its attendance – or revenues – consistently year after year. Periods when either attendance or per capita expenditures exhibit negative growth are common.

This six-year snapshot of the largest theme park chains in the United States shows what we mean.

Even rarer is increasing both attendance and per capita spending at the same time. Of the two, however, increased spending is the more difficult task. Guess which chain excels at it? 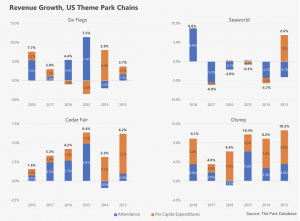 The Length of Stay Game

Recently, there has been enough sustained interest on the part of our clients to call this a trend: crafting an experience involving an overnight stay.

From China to the United States and everywhere in between, short-stay, authentic experiences are seen as ways to appeal to the Instagram & Airbnb crowd.

Increased lengths of stay are positively correlated with increased expenditures, and developers are increasingly planning guest accommodations as one of the primary facilities of an attraction, rather than as a secondary development.

“Owning” a span of 24 hours allows an attraction or resort operator to target all aspects of the guest experience. This ranges from festive to culinary, from contemplative to educational.

Check out some work we performed recently for an agricultural tourism development in Southeast Asia: