A number of high-profile dark rides opened recently. A question comes to mind regarding one particular design choice being made. Should a dark ride be “interactive” or purely story driven?

To clarify the difference between them, typically the average “interactive” dark ride prominently features some kind of a “gun” device to allow the riders to shoot at targets and obtain a video-game style score at the end. However, not every ride uses a “weapon” theme. Some even go to great lengths to disguise the interactive device to have a non-weapon theme. Yet in the end, guests are still pointing and clicking at targets, usually to get a score.

The alternative is to make the ride a passive experience where riders watch while a story is being told. Sometimes, this is done through the aid of an existing piece of intellectual property. At other times, a custom piece of home-made storytelling is told instead.

The latter would be the case for some of Disney’s biggest classic dark ride experiences such as The Haunted Mansion or Pirates of the Caribbean; which had a theme so popular it actually spawned a movie series. 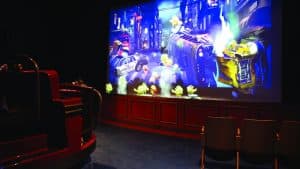 One might argue that many of the older rides were purely story-driven. This could be simply because the technology to make them interactive had not been developed yet. Nonetheless, even today it seems like the majority of new dark rides are taking the interactive path. For example, in the past week or so a number of new interactive dark rides opened across the world:

Additionally, this weekend also saw previews of the new Meow Wolf Kaleidoscape dark ride at Elitch Gardens, which I noticed still had the old ghost blaster guns in the vehicles. However in the preview footage of the ride, I did not notice any targets to shoot at, so I’m a bit unsure of where that one stands.

That said, there are still three other dark rides to open this year (off the top of my head). Mystic Mansion at The Park at OWA which will be a classic Sally Corp Ghost Blaster style interactive dark ride experience, Reese’s Cupfusion at Hersheypark (again, another shooter) and then the big one everyone is waiting for: Star Wars: Rise of the Resistance.

We don’t know a lot about what will happen in here yet, but based on the limited promotional footage shown, it appears that this ride will be story-driven and not arm the guests with blasters to take on the First Order. I’m happy with that choice. If true, it will allow the riders to take in the story being told, instead of being distracted by finding the next target to blast. This tends to be an unfortunate side-effect of most interactive dark ride experiences.

Based on this sampling, there does seem to be a distinct lean towards interactive dark rides at the moment over story-driven. And the distinction can be important to the overall experience. For example, I hate to say this, but short of a true Ghostbusters themed dark ride (which actually opened at Heide Park in 2017 and at MotionGate Dubai in late 2016) I think I’ve grown tired of shooting at ghosts and would prefer a more story-driven creepy haunted-house experience.

That statement alone does give me pause, as I think that perhaps it is the story or IP that can truly drive the experience and selection of ride style. For example, I don’t think I could conceive of a purely story-driven dark ride themed to Men In Black. Furthermore, the weapon-driven interactivity of the Men In Black ride really does fit the film’s theme perfectly.

Meanwhile, I was initially surprised to find out that PortAventura’s new Sesame Street: Street Mission ride was interactive. The attraction arms guests with interesting devices that appear to look more like a Nintendo WiiMote game controller than a gun. With these devices, guests are tasked with collecting Clues and Cookies throughout the ride adventure. As an established kid-friendly and focused IP, Sesame Street seems to have made the right choice by utilising a WiiMote style device for this attraction.

By comparison, Universal Studios Hollywood has just announced they will open a new dark ride in 2020, “The Secret Life of Pets: Off the Leash!”. This now makes me wonder if it will be story-driven or feature some kind of interactive system? Meanwhile I’m happy to also learn that Europa Park will rebuild their Piraten in Batavia dark ride for 2020 and keep it purely story-driven as before. This then allows guests to sit back and enjoy all the visuals and music.

Going forward though, I do wonder which ride style the guests prefer in the end? The memory of a good story told through an attraction, or the repeatability of riding in a living video game world and comparing scores with your friends at the end? Or perhaps parks need a little of both? They can then let the theme dictate the correct attraction style to be used.