Walt Disney Company reports Parks and Resorts revenues and operating income have both increased, thanks to strong international operations.

The Walt Disney Company has just released earnings for its fourth quarter and fiscal year ended September 30, 2017. Although the report showed declining revenues and profits in Media Networks, Studio Entertainment and Consumer Products & Interactive Media, these were partially offset by growth in the Parks and Resorts sector. 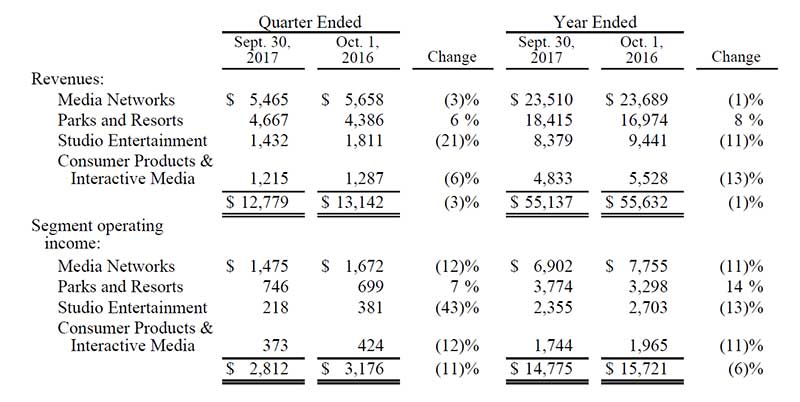 Parks and Resorts revenues were up six per cent for the quarter to $4.7 billion.  Segment operating income increased seven per cent to $746 million.

Disney states that operating income was fuelled by increases at the company’s international operations.  These were partially offset by a decrease in domestic operations in the US.  Hurricane Irma inevitably had an unfavourable effect on the US resorts. Walt Disney World Resort was closed for two days.  Meanwhile three cruise itineraries were cancelled while two others had to be shortened.

Improvements at Disneyland Paris led to increases in attendance figures, guest spending and occupied room nights. These gains were, in part, offset by higher costs.  The 25th anniversary celebration also cut into profit and, in addition, the company saw losses from its 50/50 joint venture interest in Villages Nature.  The report stated that growth in guest spending mainly resulted from higher average ticket prices plus increases in food and beverage consumption.

Meanwhile Shanghai Disney Resort’s ebullient figures came from a combination of attendance growth and lower marketing costs.  These were, in part, offset by lower average ticket prices.  Marketing spend was affected by the knock-on effect of costs associated with the grand opening of Shanghai Disney Resort the year before.

The decrease in operating income at US operations was fuelled by lower performance at Walt Disney World Resort.  In part this was offset by increases at the cruise line, plus growth at Disneyland Resort and buoyant sales of vacation club units.

Higher costs and few occupied room nights created the slower performance at Walt Disney World.  These were, in part, offset by growth in both guest spending and attendance, despite the impact of Hurricane Irma.  Increases in labour and employee benefit costs drove up overall costs.  Depreciation and marketing costs were additional factors.

Increased food and beverage spending fuelled guest spending growth. Higher average daily hotel room rates also came into play.  There were fewer available hotel room nights as a result of refurbishments on the one hand, and conversions to vacation club units on the other.

“No other entertainment company is better equipped to navigate the ever-evolving media landscape, thanks to our unparalleled collection of brands and franchises and our ability to leverage IP across our entire company,” said Robert A. Iger, Chairman and Chief Executive Officer, The Walt Disney Company. “We look forward to launching our first direct-to-consumer streaming service in the new year, and we will continue to invest for the future and take the smart risks required to deliver shareholder value.”