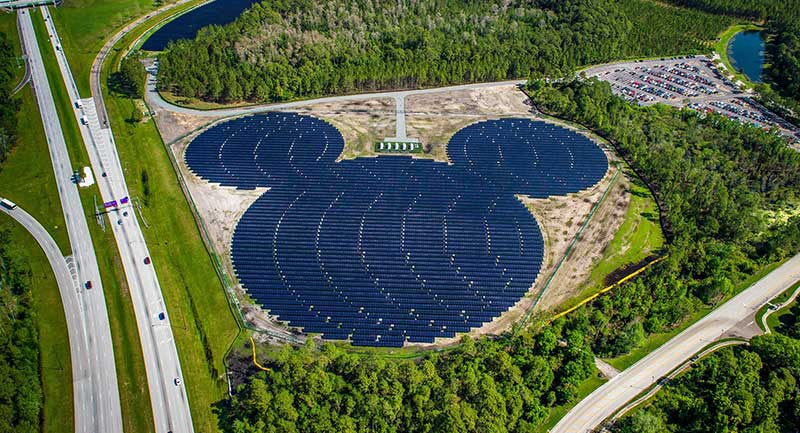 The Walt Disney Company is set to open a 50-megawatt solar power facility at its Florida resort before the end of 2018. The facility will generate enough renewable solar energy to fully power two of its four parks.

The solar panel facility is located outside Disney’s Animal Kingdom. The move will help Disney achieve its goal of reducing its net greenhouse gas emissions 50 percent worldwide by 2020, compared to 2012.

Bob Chapek, chairman of Disney Parks, Experiences and Consumer Products, said in a statement, “At our sites around the world, we’re investing in hidden magic to continually reduce our environmental footprint.”

In a report by The New York Times, Mark Penning, vice president of Disney’s Animals, Science and Environment, explained how guest attitudes were influencing green strategies: “Our guests tell us the environment is important, so it’s a big deal for us.” Bob Iger, chief executive of Disney, is understood to want to make Disney the most admired company in the world, “not just for creating incredible content, but for being a responsible citizen of the world.”

The solar facility sits on a 270-acre designated renewable energy area. It will produce enough energy to supply 10,000 homes annually. The energy will go into the local power grid.

A solar power facility will be constructed at each park. When it becomes operational, the system at Discovery Kingdom will exceed seven megawatts of electricity generated. Magic Mountain’s system will have capacity for nearly 15 megawatts and will also be the largest solar carport in North America.

The New York Times quotes a 2017 study by Cone Communications that says that 79 percent of consumers say they seek out products that are socially or environmentally responsible.

Earlier this year, Six Flags Great Adventure announced that it would become the first solar-powered theme park in the world.