Louvre Abu Dhabi was inaugurated on 8 November, and has been hailed as a monument representing the beauty of the East and the West.

The new museum was inaugurated by dignities from the UAE and France.  Both sides have hailed the building as a new global cultural monument that will “broadcast tolerance and acceptance”.

His Highness Shaikh Mohammad Bin Rashid Al Maktoum, Vice-President and Prime Minister of the UAE and Ruler of Dubai, used his speech to call for an alliance of civilisations to “face the enemies of humanity and ensure the convergence of minds and cultural exchange”. He added that Louvre Abu Dhabi represents the beauty of the East and the West.

“The Louvre Abu Dhabi will be a meeting point for lovers of art, culture and beauty all around the world. With the opening of this museum,” he said. “Abu Dhabi has become the capital of art, architecture and mankind’s heritage.”

Macron said that the museum was a “decisive turning point” in ties with the UAE.

The museum is the result of a 2007 agreement between the UAE and French governments.

The deal allows the Abu Dhabi museum to borrow the name of the Louvre for 30 years and six months. As Blooloop previously reported, it also includes temporary exhibitions over a 15 year period.  Artworks from 13 leading French institutions will be lent for a decade.

However Jean-Luc Martinez, President-Director of the Louvre Museum in Paris, stressed that the Louvre Abu Dhabi is most definitely an Emirati museum. “This is an Emirati project, in keeping with the UAE leaders’ vision of a knowledge movement in the 21st century, and France shares its knowledge,” he said.

At present, more than 50 per cent of curators, educators and support service staff at the museum are Emirati.  “If we have done our job well, visitors will come to the Louvre Abu Dhabi with questions. Then they will look to find their own answers,” said Hessa Al Daheri, Deputy Director of the Louvre Abu Dhabi.

So far, the museum has acquired 620 pieces as part of its permanent collection.  These include an ancient Bactrian princess from the beginning of the second millennium BC and a leaf from the Blue Quran which dates back to around 900 CE.  These are joined by French artist Paul Gauguin’s 1888 piece, ‘Children Wrestling’.  A further 300 items are on loan from French and regional museums.  These loans include Leonardo da Vinci’s La Belle Ferronniere, a 17th century Italian globe and a bronze statue of Apollo.

The collections are housed in a series of 55 white buildings topped by a stunning metallic dome.  The collection follows a chronological trail, detailing shared human experience across civilisations.

“For reasons that are not always apparent, humanity had periods of evolution that reverberated across cultures,” says Jean-Francois Charnier, Scientific Director at Agence France-Museums.  This organisation was created to carry out France’s commitment to the Louvre Abu Dhabi.  “We want to show this interconnection in the museum’s narrative. We wanted the [displays] to also be meaningful to this culture, and … create a dialogue [between the items].”

Visitors can also participate in the narrative via information boards that pose questions, alongside interactive displays.  “We tried to hit the right balance between enabling visitors to be ambassadors of their own cultures and participants in the Louvre Abu Dhabi’s narrative and story of humankind,” said Charnier.

The museum opens its doors to the public on Saturday, November 11. 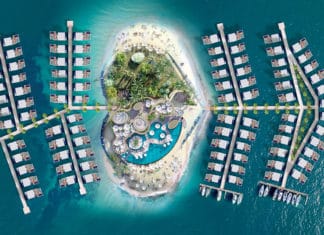