On June 14th Blooloop and AVIXA presented an hour-long session focused on the use of audio in theme parks. Storytelling with sound: trends in audio, took place during the InfoComm tradeshow at Orlando’s Orange Country Convention Center.

The session was introduced and moderated by Bradford Benn. Manager, Audio Video Systems at Universal Creative , Bradford  has been involved in audiovisual, control, and lighting design and installation for over 25 years.

The importance of audio in theme parks

The first speaker, Rick Morris is Director of Sound at Falcon’s Creative. His career prior to joining the company was in the movies, where he quickly became known as, “the backgrounds guy”. Although nice to have his work recognised, Rick was slightly frustrated not to get to do the cooler sounds – “I can do guns and spaceships too”. It doesn’t sound quite so impressive at the cinema when you say to your wife, “Hear that bird in the background? That’s me.” 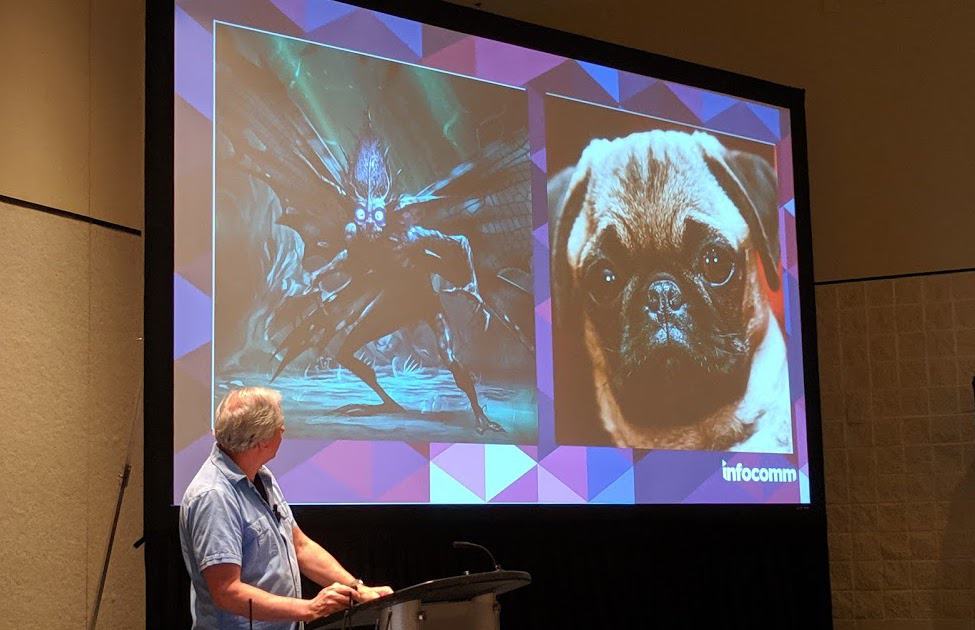 In an engaging session, with some diverting practical examples, he highlighted the importance of sound in creating exactly the right atmosphere and emotions for both films and attractions. “Sounds can change everything,” he said.

He is constantly on the look out (ear out?) for interesting and unusual sounds and always carries a recording device. Rick’s tip for recording Florida’s wildlife? Wait until the cooler evenings, the bugs are just too loud in the day.

But what do you do if the sound you need doesn’t exist? Rick talked us through how he has created the “voices” of different dinosaurs for attractions.

For the mythical creatures at Busch Gardens Williamsburg’s Battle for Eire VR attraction, Rick didn’t have to look very far from home.  A snuffling goblin-like creature was voiced by a pug and the sound artiste for another mythical beast was Rick’s own Yorkie.

In a conclusion, Rick said, “Find the appropriate sound and make it believable. People don’t care about the truth, they just want to believe”.

Transporting the visitor with realism

The next speaker was Joseph White, Crafted Design‘s President/Lead Designer. He talked about Realism in Audio.

Joseph pointed out that people are used to hearing how TV, concerts and radio sound. However, he said, “although the announcer’s voice or a speech delivered via a microphone are not realistic they are what people expect to hear in those situations”.

This means that when creating an immersive experience, playing audio effects that sound very real can actually transport the listener in a way that the sound they have come to expect cannot. Joseph discussed what people expect to hear in different situations and  the barriers to achieving truly realistic sound. One issue, he said is that, “nearly everyone says they want realism but are not always prepared to pay for it”.

Working with realism is, he said, his “favourite way to subvert expectations”.

Timing is of the essence

The final panelist was Barco‘s Eric Cantrell, who is Product Manager, Medialon Show Control. Eric examined how the timing and synchronization of sounds is critical to storytelling. Theme park shows, roller coasters, animatronic characters and parade floats all bring with them unique sound challenges.

“The direction the sound comes from helps to tell the story” he said. The situation may be simple in a movie theatre but is more complicated when “the audience’s ears are moving around a venue”. This is the case in a dark ride or at a parade. The latter are, Eric said, from the point of sound design, “inside-out attractions”.

Finally, moderator Bradford Benn took questions from attendees. One discussion was about longevity of theme park sound systems. Joseph said, “one of first rules of audio in theme parks is a system needs to last 5-10 years”. Bradford cited the much missed Universal attraction T23D. He said, “planned obsolesence helps to upgrade an attraction during a long lifespan when newer, better technology becomes available”.

Thanks to our speakers and to our friends at InfoComm and Avixa for supporting the Technology trends in theme park attractions session.