Digital Projection, a specialist in LED laser projectors, has lit up the Château de Vaux-le-Vicomte in France to create a festive event.

Digital Projection has announced that its technology has been used for the projection mapping of the Château de Vaux-le-Vicomte’s façade, helping to create the annual “Vaux-le-Vicomte’s illuminations” Christmas show at the castle, 50km southeast of Paris.

The event takes visitors on a festive journey around the 100-acre grounds, and for the past two years has included video mapping and a spectacular finale projected onto the front of the castle. This year, the team behind the illuminations, French integrator and rental stager BS Technology, chose Digital Projection’s M-Vision Laser 21000 WU for the projection mapping of Vaux-le-Vicomte’s façade. Lighting up a historic venue

“Digital Projection’s recent ground-breaking technologies, like the remote laser light source, are probably what put them on the map for us originally,” says Eric L’Herminier, technical director and CEO of BS Technology. “We saw this as a good opportunity to work with them on this video-mapping project.”

To create a show that runs seamlessly every 30 minutes from 6 pm to 8 pm, from the start of October all the way through to 3 January 2021, the project required an automated system that is capable of running flawlessly without further direction. For this, BS Technology opted for four M-Vision Laser 21000 WU projectors stacked in pairs, two on the side, covering the domed centre of the building, and the other two in covering the sections either side.

The lenses for these projectors differed in throw ratio with two of them respectively fitted with Digital Projection 2.0 – 4.0 lenses and the two others fitted with 1.5 – 2.0 lenses.

This lamp-free, laser-phosphor projector has a 10,000:1 contrast ration and 21,000 lumens for realistic and vivid colours. This is combined with intelligent colour processing for a performance close to that of a 3-Chip DLP projector, at a 1-Chip price point. 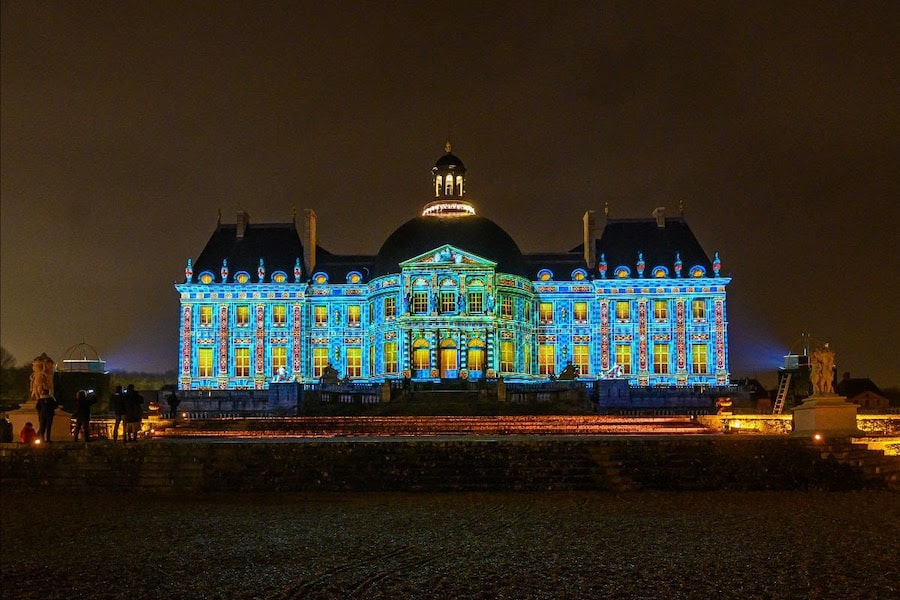 The projectors were connected to the FOH towers with fibre optic cabling, with media server Modulo Pi managing the content for the projection mapping, created by Alexis Gabirot. The sound system of four Fohhn LX601 is also integrated into the towers facing the public. The set-up is hidden under two oval aluminium towers each side of the castle, covered by vegetation with a gap for image projection.

“We needed to be discreet as well,” says L’Herminier. “We couldn’t make it more than 3m high, as that could interfere with the public’s view of the projection, but it also needed to be large enough for the projectors and any cooling systems.

“The collaborations of the teams made sure we were able to keep to the tight deadline, which only allowed for one day and two nights for the mapping and installation. Simon Gambiez, the main contact on-site working beside us, assisted us with this collaboration and the technical elements.”

While in normal years, the site would welcome between 4,000 and 5,000 guests each day, COVID restrictions mean that the castle has had to adapt. Following the second lockdown in October, it was able to reopen the gardens and the show on 28 November and plans to restart castle visits from 15 December.

“We had a really good relationship with Stéphane Bourdon from Digital Projection France throughout this project, who was also assisted by the Digital Projection team in the UK. We knew we could count on them if we needed them,” says L’Herminier. “The result has been a successful projection that met the end user’s requirements.”

Ascanio de Vogüé, managing director and co-owner (with his brothers Alexandre & Jean-Charles) of the Vaux-le-Vicomte, says: “AV, when done properly, is able to revitalise old, historic sites and breathe life into them for younger generations.

“We wanted to strike a balance between making the visit an enjoyable Christmas experience, whilst also honouring the history of the castle. I think that the projection on the Vaux-le-Vicomte achieves this, not only by highlighting the architecture of the monument but also by honouring its culture and past. The castle was, when it was built, a place of art, and with this mapping, we are truly honouring its original purpose.”