Thibault Paquin (left) is the founder and principal of Celebrating Life Asia, an independent consultant and development company for the leisure & thibault paquinentertainment industry. He is also the managing director of iVenture Card Asia, which is operating attractions passes in Hong Kong, Macau and Singapore.

As we are in the Halloween month I look back at Halloween events and scary rides in Asia and ask myself, “What is it that people like in the East?”

For the teenagers… and the whole family

Like everywhere scary rides and events are popular with teenagers and particularly with small groups of friends who like to share this kind of experience and ‘test’ each other’s limits.

This is something Ocean Park recognized when they started their Halloween celebrations 13 years ago, mostly targeted at local teenagers with dedicated marketing platforms. Watch the video below from last year to see Halloween revisited in Gangnam style.

Ocean Park’s Halloween event has become Asia’s largest Halloween themed event and one of the most anticipated seasonal festivities in Hong Kong. It attracted more than 750, 000 visitors in 2012.

Other attractions in the region saw the potential of scary rides to reach out to a more demanding group of teenagers. Merlin Entertainment added its SCREAM attraction to Madame Tussauds in Shanghai (2006) and Hong Kong (2008). In Malaysia, Sunway Lagoon revealed in 2008 its SCREAM Park in collaboration with New York-based The Sudden Impact! These walk-through attraction feature live performers, themed environments and sound effects.

(See also: Haunted Attractions: How to Tell a Scary Story – Making Nightmares Come True in the UK, US and Asia)

Beyond ghost stories and haunted houses, one reason that Halloween is being embraced in Asia is the opportunity to dress up which seems to be absent in most Asian celebrations. And this opens avenues for a more family-friendly event, which suits very well attractions and theme parks.

According to Ms. Vivian Lee, Ocean Park’s Director of Marketing, “more and more people look to the Halloween event for fun elements for the family” so for the first time this year the event will be open all day for all visitors of the park. Watch this video to see how the park is adapting its message for a family crowd beyond its strong teenager followers.

Despite what I would have thought, there actually is a strong horror and ghosts culture in Asia.

Asian horror films, especially from Hong Kong, Japan and Korea, are quite popular and famous for their original storylines and strong psychological plots, making them different from traditional scary films. A number of them were even adapted in Hollywood.

In Japan, going to a ghost house called “obake yashiki” is a summer tradition.

Ghost houses are set up in amusements parks with the tradition linked to Japanese Buddhism which views August as the time when ancestral spirits may return for a visit and Japanese visit their elders' graves.

When it comes to Halloween, Asians can relate because of its links to the supernatural. Asia has plenty of pre-existing festivals to celebrate the return of the dead. In China Halloween is celebrated as Teng Chieh, where people visit the local Buddhist temple to make paper boats to carry their deceased loved ones to peace. Japan’s Obon sees red lanterns hung in houses to guide the spirits home and in Korea the celebration of Chusok sees relatives visiting graveyards with offerings of food as a mark of respect to the dead.

According to Allan Zeman, Chairman of Ocean Park, "it is very important for Halloween to be close with local culture … Hong Kong people like to see local stars in the event as well as to experience local ghost stories … I have come to realise that local people are very superstitious and somehow they love to be scared by the local culture. They really believe in their own ghosts and ghost stories."

The same cultural adaptation goes with scary rides and attractions. According to local sources, Merlin Entertainment is planning to introduce its brand The Dungeons to Asia with its first ‘museum coming alive’ scheduled to open in Sentosa, Singapore in 2014 with a storyline based on the ‘dark’ history of the city.

But local cultures can be hard to deal with sometimes. The best example is when Wildlife Reserves Singapore (WRS) decided to cancel their very popular Halloween Horrors event in 2011 claiming negative feedback from "corporations, friends of the zoo, the public and the media about the event, especially over the relevance in relation to conservation" and a clash with the Deepavali festival in October.  Some students from Singapore Polytechnics – involved in the organization of the event – reported that someone in the senior management even said: “We should not worship the devil".

Coincidentally the attendance level at WRS parks have been disappointing in the last year and the new park River Safari has seen a slow start.  Could it be that they lost the support of a key opinion leaders group that is the local teenagers?

And during this time, Ocean Park Hong Kong is adapting to local cultures and embracing both teenagers and families with its Halloween event, resulting in record attendance levels (over 7 million this year).

I will let you make your own judgment but one thing for sure: Asia  is embracing Halloween. 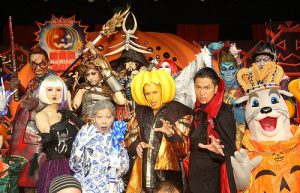 From Asia with Life: Halloween Trends in Asia