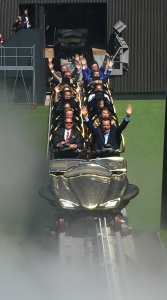 “We’ve been overwhelmed with calls and e-mails from people all over the world wanting to know when ICON will open to the public,” says Amanda Thompson OBE, Managing Director of Blackpool Pleasure Beach. “I’m so excited to be able to answer and confirm 25 May! We can’t wait to invite those who dare to ride to Blackpool to experience this truly incredible ride. ICON promises to set hearts racing.”

ICON –subtitled Dare to Ride – is the first double launch rollercoaster in the UK. Riders get high speed propulsion, not only at the beginning of the ride but also at the mid-point of the ride for an extra thrill. It is also set to be the world’s most interactive ride, offering more thrills per square foot than any other coaster. It interacts no less than 15 times with five other rides (including The Big One, the Steeplechase and the Big Dipper).

The two and half minute ride over the 1.14 kilometre track offers the same acceleration as that of a Formula 1 driver. It twists, turns, dives and swerves at speeds of up to 80 kilometres an hour across the park. The ride then shoots through tunnels and interacts at high speed with five other rides. A second turbo-boost of speed propels riders up to 88.5 feet with a heart-plummeting drop of 82 feet.

The rollercoaster was built in Germany by Mack Rides, adding to a legacy of collaboration between the two theme park families.  ICON is the fourth ride from Mack at Blackpool Pleasure Beach, whilst Amanda Thompson produced ice shows for many years for Europa-Park.

The impetus to add a new rollercoaster was to reach out to thrill-seekers after additions in recent years focusing on family attractions like Nickelodeon Land and Wallace & Gromit. Nick Thompson promised more thrill rides in coming years. Perhaps not quite as “extreme”, but offering a broader appeal.

The ICON name came after research with target audience.The ride has been “styled” rather
than themed with Japanese and Games of Thrones influences.

She adds that, at £16.25m, ICON is Blackpool Pleasure Beach’s biggest investment to date. “It will have a real impact on the town and region as a whole.”