Merlin Entertainments Group, the world’s second biggest attractions operator after Disney, has reported preliminary results for 2018, and detailed its strategic drivers and plans for continued growth.

The UK-based company owns and operates over 120 attractions worldwide. Its portfolio includes 18 hotels and six holiday villages together with major theme parks such as Thorpe Park, Alton Towers and Heide Park. 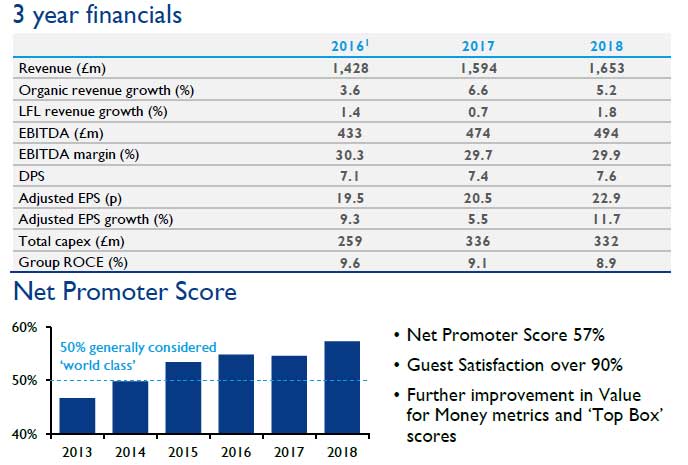 Back in March Merlin hit a record 66 million visitors across its attractions globally.

Nick Varney, Chief Executive Officer, said of the company’s latest results: “We have reported further growth in 2018, with underlying EBITDA increasing by 6.2%, as we welcomed a record 67 million visitors and continued to deliver strong levels of guest satisfaction.

“2018 saw improved momentum across most of our businesses reflecting the strength of our diversified portfolio and geographic spread. Resort Theme Parks benefited from successful product investment such as ‘Wicker Man’ at Alton Towers; LEGOLAND Parks growth was driven by record levels of accommodation openings; and, in addition to the contribution of seven new attractions, Midway saw improving trends in London.

“We continue to seek to mitigate ongoing external cost pressures and expect to deliver up to £35 million of annualised savings by 2022 through a number of initiatives. Not only will this help underpin our financial outlook, it will better enable our people to deliver what matters most to our guests: fantastic memorable experiences.

“Around the world, leisure spend continues to grow as disposable incomes rise and ever greater value is placed on good quality, shared experiences with friends and family. Our continued investment, new market opportunities and our evolving position as a unique, multi-format international operator of strongly branded and IP-led location based entertainment, give us the confidence that we are well placed to deliver long term growth and returns.”

Merlin has made good progress against its six strategic growth drivers in 2018, providing a platform for continued growth.

Delivering on the strategy, the group has further expanded and diversified its portfolio:

Major 2019 investments are set to include ‘Lego Movie World’ at LEGOLAND Florida, the launch of the ‘Colossos’ roller coaster at Heide Park, and ‘Day and Night on the Reef’ at SEA LIFE Sydney Aquarium.

A total of 644 opened in 2018, including a 252-room hotel at LEGOLAND Japan, a 250-room LEGOLAND California Castle Hotel, and a 142-room Pirate Island Hotel at LEGOLAND Deutschland.

372 rooms are expected to open in 2019, including the Magic Hotel at Gardaland and Stargazing Pods at Alton Towers.

Varney says: “I don’t think that there are many companies in the world that have the sort of development pipeline that Merlin does … this is an extremely exciting dynamic market which can only grow as leisure consumers around the world get more disposable income and more time, and they’re after quality branded and intellectual property led experiences.”