The Walt Disney Company has seen a successful third quarter, with an increase in revenue across the company and within the Parks and Resorts segment.

The company saw a 7% rise in revenues for this quarter compared to the same quarter last year. Parks and resorts continue to contribute heavily. Revenues for Disney’s parks and results increased 6% on the same period last year, up to $5.2 billion.

An increased operating income was attributed to increased guest spending as a result of  increases in average ticket prices, food, beverage and merchandise spending and average daily hotel room rates. The company noted an increase in costs – as a result of labour and other cost inflation. However this was partially offset by lower marketing costs. Domestic parks saw a 1% increase in attendance. 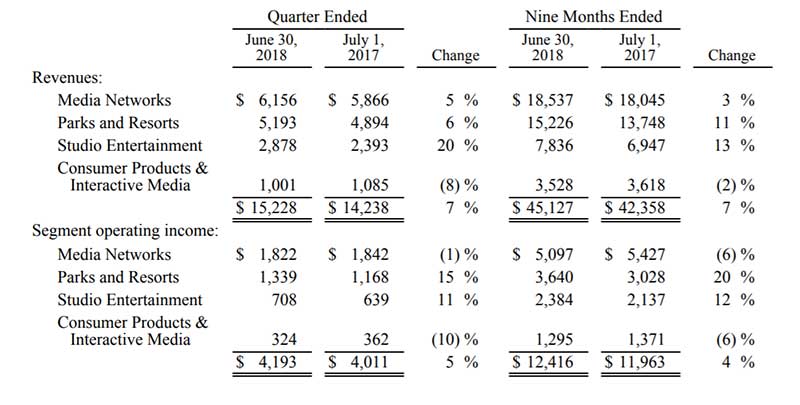 Room refurbishments and conversion at Disney’s domestic hotels had an impact on occupancy. Occupancy was down “about two percentage points” to 86% due to the reduced room inventory due to room refurbishments.

The properties in the 21st Century Fox portfolio, which Disney is set to acquire, will serve the company’s global growth strategy – says Bob Iger, CEO. He said: “The addition of these valuable assets will greatly enhance our position as a global entertainment company with excellent production and distribution businesses in key and emerging markets around the world.”

The company say they will support Fox’s brand such as National Geographic to expand around the world. Particularly on National Geographic, Iger points out: “we see numerous other exciting opportunities for this brand across our entire company, including in the eco-tourism space.”

Iger added: “In this era of unprecedented consumer choice, brands matter more than ever. And our incredible portfolio of high quality, in-demand branded content uniquely positions us to strategically and successfully navigate this increasingly dynamic marketplace.”