A little over a week ago, Universal Orlando opened Hagrid’s Magical Creatures Motorbike Adventure. Is this new ‘story coaster’ and the unique themed experience it provides paving the way for a new generation of roller coasters? Or, do riders want a pure coaster experience without a story element?

After being able to experience it personally, I can confirm that not only is it an amazing adventure ride, but it is probably the most fun coaster ride in all of Orlando. And this is saying quite a bit. Beyond that, the ride also has something else going for it, as Universal is referring to it as a ‘Story Coaster’.

While having a ‘themed’ coaster experience isn’t new, having one so wholly themed to the experience and able to tell a complete story along the way is unique. Guests are taken out into the Forbidden Forest on flying motorbikes as part of Hagrid’s Care of Magical Creatures class. They are rushed along the way on this ‘story coaster’ by seven different launch points, both forward and backwards.

A highly themed ‘story coaster’ unlike any other

Unlike the previous Harry Potter rides built at Universal thus far, you will not see any projection screens here. Instead, guests rush at speeds up to 50mph through a complete forest of 1,200 live trees. This is inhabited by several full-scale animatronic figures, castle ruins and caves. There are also various other objects you will pass along the way as Hagrid’s field trip into the forest gets a little out of control. The end result really got me thinking. Why can’t we have more highly themed roller coasters like this in the world? The addition of a themed story enhances the ride experience. Furthermore, rushing through such a completely themed environment only helps to enhance the sensation of speed.

Digging deeper, I think what really drove it home was that Hagrid’s delivered a complete environmental experience. It was an experience you would normally only find on a slower-moving dark ride. And yet at the same time, it also featured the exciting rush and G-forces of a great roller coaster.

I’m sure this all came at great cost to Universal. However, the end result is so amazing that it has really made me consider just what else could be possible. For example, the Copperhead Strike coaster that just opened at Carowinds is a fantastic coaster. It has a lightly themed queue and station, and even a trip through a barn hiding a moonshine still that the train launches out from.

After that moment however, the rest of the roller coaster ride is unthemed. There are some design similarities to Hagrid’s, in that Copperhead Strike’s layout is mostly full of low to the ground twists and turns. Nevertheless, it does make me wonder what Copperhead could be like with more extensive theming tied into a more involving storyline.

The Disney parks have been building themed coasters for decades. They have taken riders for thrills through incredible indoor/outdoor environments on attractions. These include The Matterhorn Bobsleds, Big Thunder Mountain, Seven Dwarfs Mine Train and Big Grizzly Mountain. Yet at the same time, there never really was a “story” involved in those journeys.

Universal has also gone the story route before on previous attractions such as Harry Potter and the Escape from Gringotts. However, you might argue that the attraction is more of a dark ride with short coaster style moments at the start and end of the journey.

Universal’s Revenge of the Mummy also starts up with some nice storytelling moments. Despite that, it ends with a wild coaster ride experience in the dark to complete the tale. I would also be remiss if I didn’t give an honorary mention to the two Mack Rides Powered Coaster attractions: Arthur at Europa Park and Dragon Gliders at Motiongate Dubai. Although those two are really more of a dark ride experience rather than a coaster.

These are all fine and good. However, at the opposite end of the spectrum are the high speed, high altitude roller coasters. These rides send coaster trains soaring upwards of 400 feet and at speeds ranging from 70 to 120mph or even more. With such extreme thrill rides, do scenery and storytelling even matter? 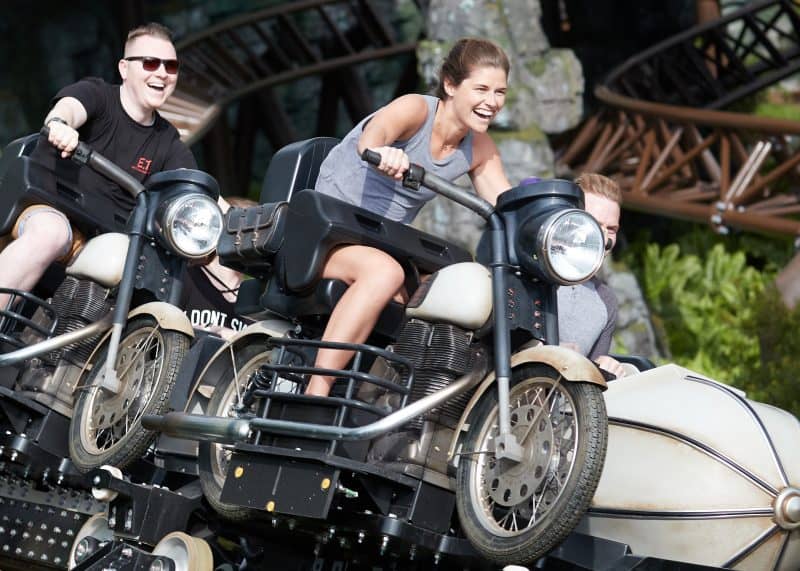 After all, it would be rather difficult to make out any dialog over the rushing air and screams while you are plunging 200 feet towards the ground. Are riders even going to notice the themed set pieces built alongside the track? Can they see anything clearly as the train whips around the corner at 85mph? We’ve already seen guests reject attempts at adding VR-enhanced visuals to these kinds of rides.

As great as themed elements are, sometimes all a coaster rider really wants is to get that classic wild, out-of-control, roller coaster sensation. It becomes a quest for an unfiltered, need-for-speed, adrenaline-rush. One that has no need of Dragons or Dementors.