This year there are both fascinating new rides and revamps of some much loved existing rides.

While Mack Rides has always had a presence in the USA, it was often for their flat and water rides, and less for their coasters. These were mainly represented by the Wild Mouse designs cloned throughout the country and less by their launch coaster designs. That has slowly begun to change as the Mack-designed Manta coaster at SeaWorld San Diego became an instant hit. And Mack also made the news in 2018 with the premier of Time Traveler at Silver Dollar City; the first launch “Xtreme Spinning Coaster”.

I have a feeling they will make the news again in 2019 with the opening of Copperhead Strike at Carowinds. This is an incredible new double-launch coaster with a ton of low-to-the-ground twists and turns and five inversions. The attraction will be themed as an old Carolina farm property with a hidden moonshine operation.

While the concept of having an entirely new land at this Italian theme park themed to the Ducati motorcycle company is intriguing on its own merit, what has really got my attention is the star attraction, Superbike Race. Superbike race will be the first pair of duelling/racing Spike Dragsters powered coaster designs from Maurer Rides.

Two riders each will be aboard these giant super-powered beast bikes. In addition to holding on for their lives, they will also control the throttle and speed of their ride experience; all while racing against another set of riders on the track next to them to see who can win the race. The new interactive ride experience mixed with the competitive nature of the design will make for an attraction that I believe will have an incredible re-ride factor to keep guests coming back again and again.

I haven’t heard much about this particular project yet. However, based on the past work of Rocky Mountain Construction, I’m very interested in seeing how this one turns out. This will be the first existing wooden coaster in Europe to be transformed into a new Hybrid coaster creation by RMC using their IBox track system.

We’ve seen them work miracles across the USA by transforming older wooden coasters into modern monsters. So I can’t wait to see what they have in store for the park’s former Robin Hood coaster. (Note: RMC’s other European creation, Wildfire at Kolmården in Sweden uses RMC’s standard wooden coaster track system, Topper Track, and not IBox.)

The 2019 season isn’t all about new roller coasters. Dark rides will play a huge part this season. And one that I’ve had my eye on is the new Popcorn Revenge attraction coming to Walibi Belgium.

The interactive attraction is a new concept from Alterface and ETF called the “Erratic Ride”. Essentially, it allows for an attraction to create a large dark ride experience in a compact space by using a trackless dark ride vehicle. This vehicle is also able to visit various rooms in the ride buildings to experience the attraction’s interactive experiences. However, these rooms can be visited in different orders each time; or based on the riders’ skill, they may not get to experience all of the rooms at all if they fail their mission early. More skilful riders may also be rewarded with an extended ride experience, or an entirely different ending, through the use of the interactive media system.

Universal surprised many last year when they announced that they would be closing down their Jurassic Park water ride. This was to give the experience a dramatic upgrade and transform it into the world’s first “Jurassic World” themed attraction. Almost no details have been leake. However, from what we have seen at the construction site, the new experience will be much more than just slapping a coat of paint and a new logo on the entrance.

Large steel framework has been spotted at the park being installed; this will fully enclose the first half of the ride’s outdoor ride experience; leading to much speculation about the attraction adding new media based projection systems as well as all new special effects and animatronic dinosaurs into the mix. While the physical ending of the ride will still include the attraction’s famous large plunge into the splashdown pool, I’m also hearing that the climatic ending leading up to that point will be new and very satisfying.

While we still know very little about this much-delayed new attraction, we have been told to expect it to finally open in 2019 as Dynamic Attraction’s first “SFX Coaster”. The bright red steel coaster track has been installed at the park for a few years; and we know the ride experience will also include several LSM launch moments. However, the rest of the ride’s hidden track sections still have many surprises to be revealed. This is likely to involve projection screens, tilt or drop-track sections and more. When it comes to Europa Park, the Mack family seldom do anything simple or easy. So when they announced that they would be building their first stand-alone indoor waterpark, the industry sat up and took notice.

Slated to open by the end of 2019, the massive new structure containing the park is easily visible to all guests entering Rust on their way to Europa Park. Much of what will be included inside is still a closely guarded secret. Concept artwork and bits and pieces of a storyline for the park have been slowly released over the past year. These have built anticipation of what may be the most highly themed indoor waterpark experience on the planet.

The Disney parks will spend much of 2019 in the midst of a year-long celebration for Mickey Mouse who just turned 90 in November 2018. With that in mind, it is only fitting that the main mouse will get his own dark ride at long last by Fall 2019. The new ride experience will be called Mickey & Minnie’s Runaway Railway. It is taking over the massive structure that originally housed the park’s “Great Movie Ride” dark ride experience.

As expected, Disney is keeping much of the ride experience a closely guarded secret; although they have revealed that it will feature “a new experience that defies logic that we’re calling 2 ½-D. No glasses required.” 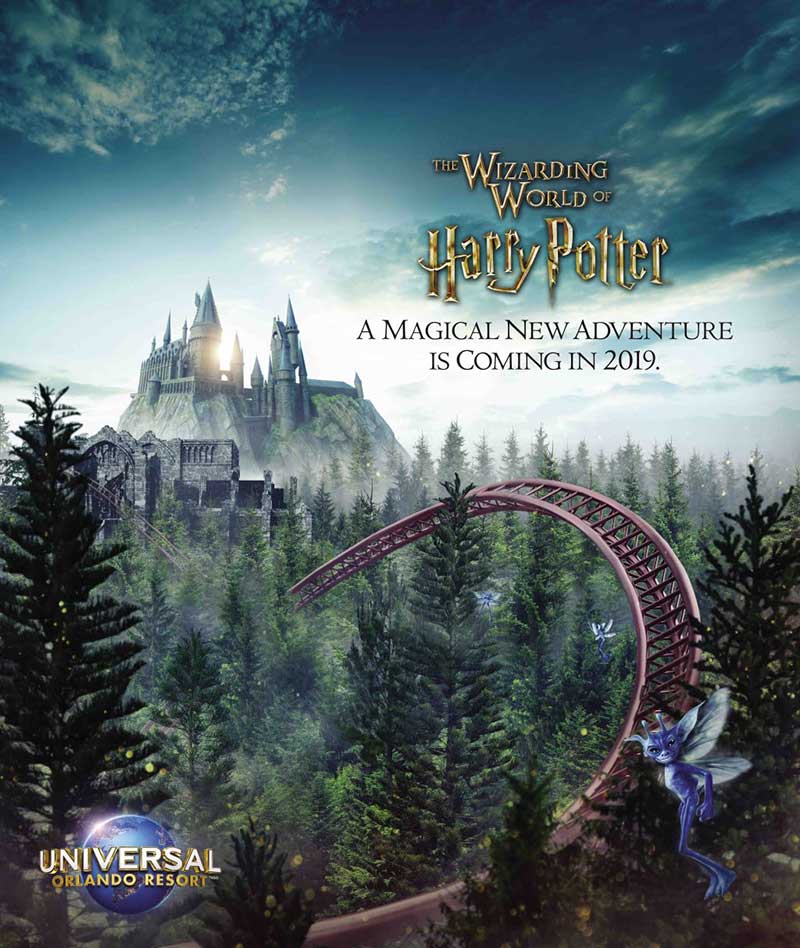 A large new roller coaster and special effects experience attraction themed around The Wizarding World of Harry Potter has been under construction since late 2017. While some of the ride’s surprises have been very visible from the construction site, one of the biggest mysteries so far has been the actual name of the new attraction.

Universal Orlando has been keeping all details about this ultimate new ride experience under wraps. Furthermore, with the ride set to open by this summer, they have yet to even officially announce its name. So far they have only confirmed that it will open in 2019 and will be a new attraction themed around The Wizarding World.

Eagle eyed construction observers have determined much more about what we can expect here; but I’ll leave the details in the wind for now. Other than that, we can expect a highly themed indoor and outdoor multi-launch coaster experience that will offer more than a fair share of surprises along the way.

Before I get to the top spot on the list, I thought I’d also bring up other interesting attractions that deserve an honourable mention:

Without a doubt, the entire theme park industry will be watching for details as these two new highly themed lands open in 2019. Disneyland’s will open in summer 2019, followed by the Walt Disney World version at Disney’s Hollywood Studios in late 2019. If the rumoured numbers are to be believed, each of these lands is said to cost in excess of $1 billion. In addition to a full featured new land, they will also each include two never-before seen dark ride concepts from Walt Disney Imagineering.

“Millennium Falcon: Smugglers Run” will take a group of six guests at a time into the cockpit of the legendary Millennium Falcon space ship. Guests will be given the controls to take her out on a mission of their own; where their every choice, decision and reaction will make a difference to the outcome of the adventure.

“Star Wars: Rise of the Resistance” on the other hand, could very well become the ultimate new Disney dark ride for the next decade; setting the bar to an entirely new level. Featuring trackless dark ride vehicles, guests head out on an interactive adventure to take on the The First Order.

Star Wars: Galaxy’s Edge is more than new ride hardware. This is also Disney taking the entire guest experience to a new level; by featuring themed characters to talk to, all new and entirely dining and shopping experiences, and much more; as the goal is to bring a living and breathing piece of the Star Wars universe to life inside their theme parks. The world will be watching.