Since their early days in the 1940s and 50s, water parks have only grown in popularity. Now, there are world-class water parks all over the world, from North America and Latin America to Europe and Asia.

Well established markets, such as Europe and North America boast some of the top facilities in the world. For example, Therme Erding in Germany and Typhoon Lagoon at Disney World in Florida. Meanwhile, Asia is home to some newcomers that are rising in popularity, like Chimelong Water Park and Wuhu Fantawild Water Park in China. Many newer water parks have also entered the market in the Middle East in recent years.

Here, blooloop showcases the 17 top water parks across the globe, measured by attendance. 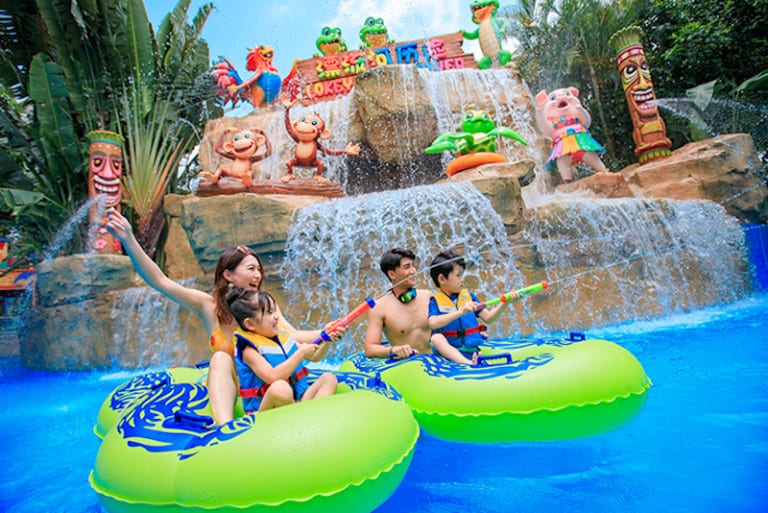 Chimelong Water Park in Guangzhou became the world’s most popular water park just a few years after it opened in 2007. The aquatic attraction features colourful slides and tubing rides, as well as music and dance performances. 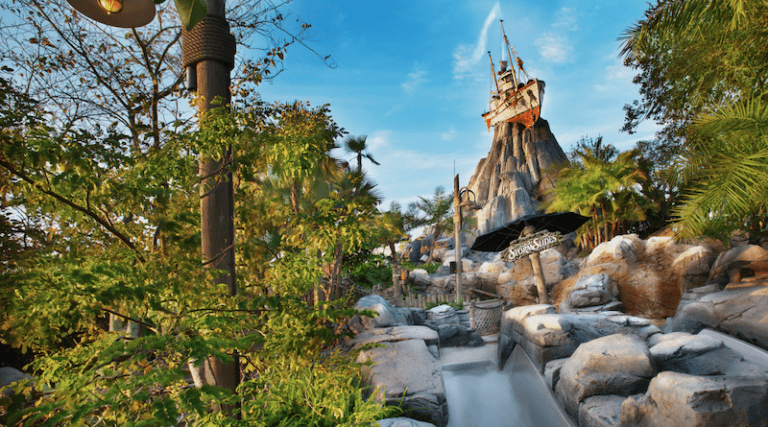 Typhoon Lagoon is a water park located at Walt Disney World Resort in Lake Buena Vista. It is one of two water parks operating at the resort and was the second to open following Disney’s River Country. This closed in 2001.

The water park in Florida opened back in 1989. It is inspired by a tropical paradise, with decor including ships, fishing tackle and surfboards. Typhoon Lagoon’s sister water park, Blizzard Beach, first opened its gates in 1995. 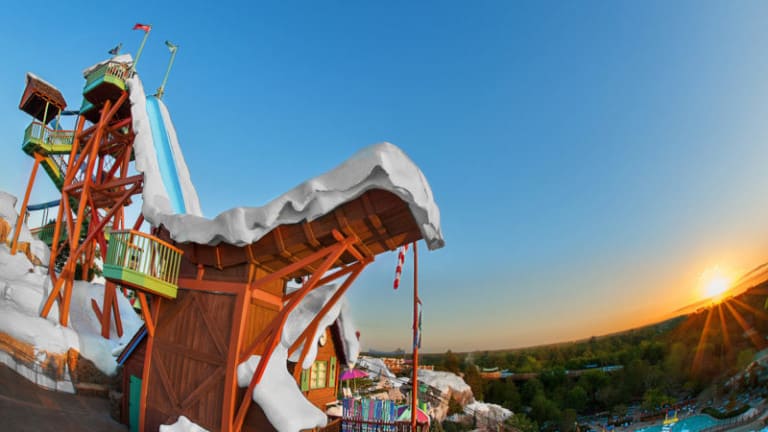 Blizzard Beach, the aforementioned sister attraction at Walt Disney World Resort, was the third water park to debut at Disney’s Orlando property in 1995. Prior to the pandemic, Blizzard Beach temporarily closed for enhancements.

Blizzard Beach was originally going to become the first ski resort in Florida, but it ended up waterlogged and rebranded as a water park. The majority of its attractions are located atop an artificial hill of 90 feet called Mount Gushmore.

Walt Disney World Resort recently reopened Blizzard Beach, which had been closed over COVID-19 since March 2020. The resort and its theme parks reopened in July 2020. Blizzard Beach features various attractions, including water slides, rapids and pools. 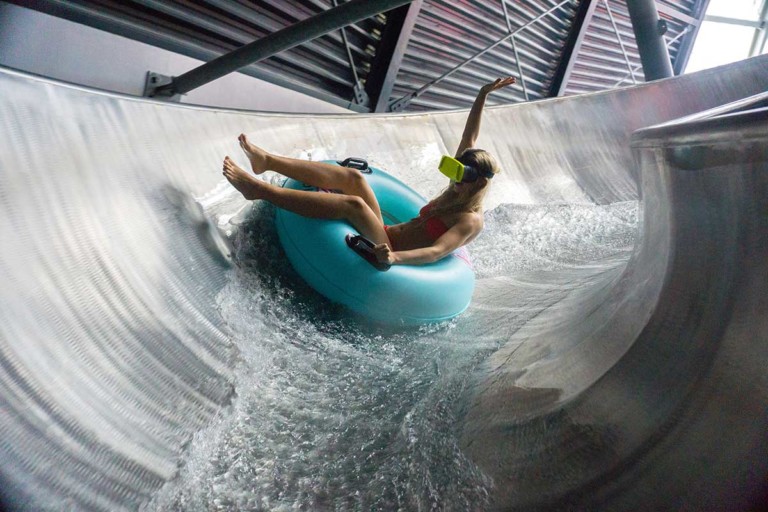 Therme Erding, the second largest thermal bath complex in Europe, is located close to Munich and welcomes approximately 4,000 daily visitors. Therme Erding covers 185,000 square metres and launched in 1999. It is the first of two German parks to make this list of the world’s top water parks.

Riders need to wear VR headsets, which are comfortable and waterproof. The VR element enhances the experience, rather than overwhelming the visitor. 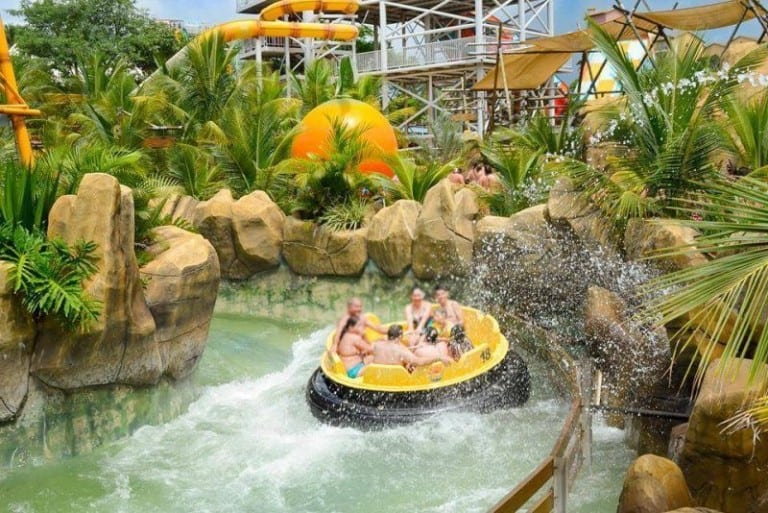 Thermas dos Laranjais is the top water park in Latin America and the fifth most popular globally. It first opened in 1987 and is home to the largest complex of thrilling waterslides in Brazil. It is located in the northern part of the state of São Paulo. 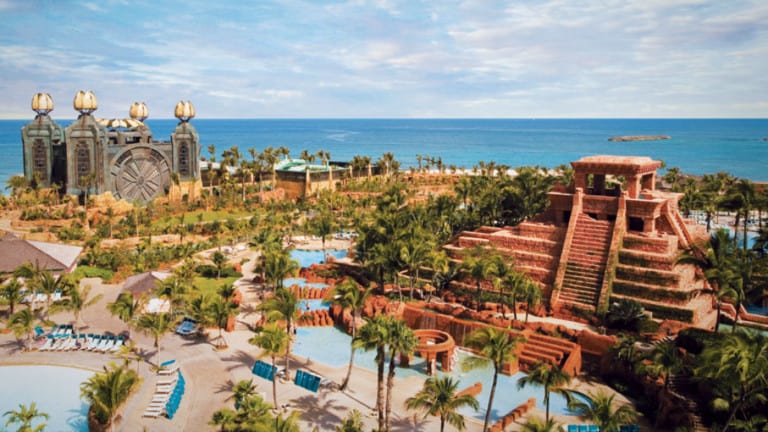 Atlantis Aquaventure, a tropical water park in the Bahamas, opened in 1994. The water park is the leading water-themed attraction in the region on TripAdvisor. Cloward H2O, an expert in aquatic design, contributed to the project at Atlantis The Palm.

There are three Atlantis Aquaventure water parks across the globe, in the Bahamas, China and the UAE. Aquaventure at Atlantis the Palm in Dubai will become the world’s largest water park as it expands by 30 percent.

Aquaventure water parks are home to attractions including the Mayan Temple, which has a series of rides and slides. There’s also a river ride with waves, rapids, tidal surges, steam and waterfalls, and an exhibit for the park’s cetaceans called Dolphin Cay. 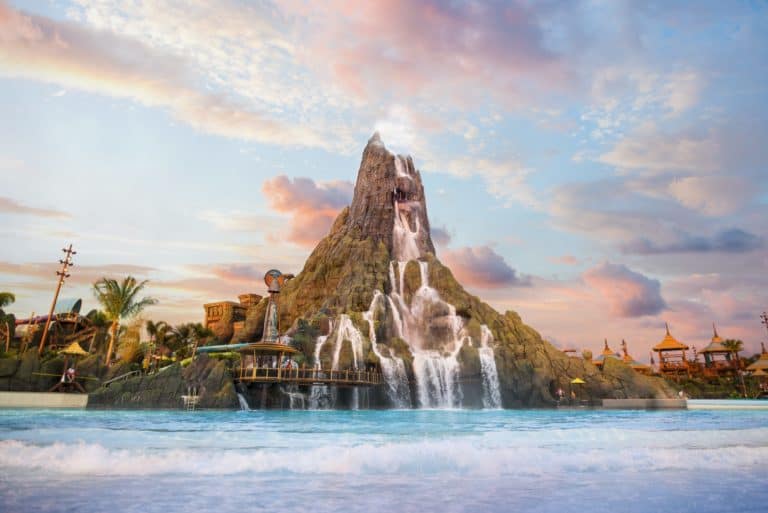 These include body slides, raft rides, a multi-directional wave pool and a hydro-magnetic waterslide coaster. Universal temporarily closed Volcano Bay in order to “conduct annual maintenance on several attractions” between November 2020 and March 2021.

“It’s typical in the industry for water parks to do seasonal closures during winter months for maintenance purposes,” said Universal. This was the first seasonal closure for Volcano Bay, which has operated in a year-round capacity since it launched in 2017.

“Universal’s Volcano Bay sets a new standard on every level,” said Tom Williams, CEO and chairman of Universal Parks & Resorts. “It provides our guests with spectacular entertainment experiences and innovative technology that helps them enjoy more of what matters most – connecting with each other and having an amazing time together.” 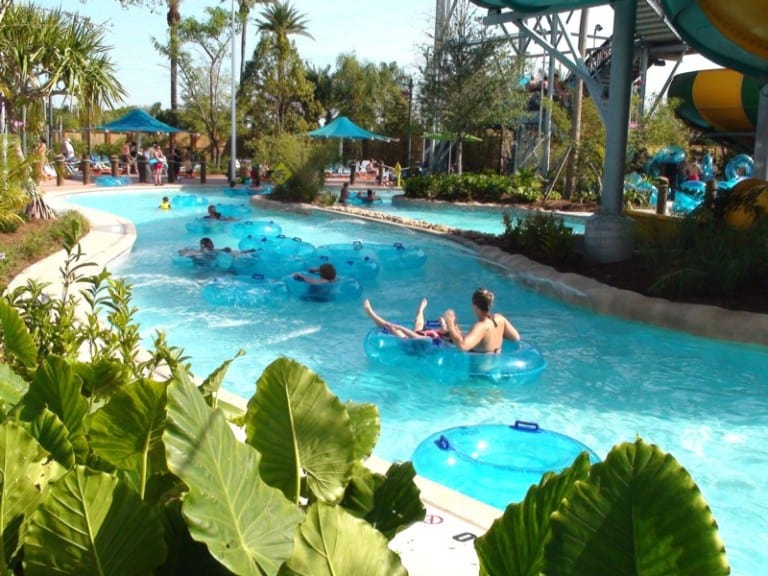 Riptide Race riders will slide side by side and face-to-face in racing lanes. “Aquatica will be the first water park in the state to have a thrilling, and more importantly, duelling water slide,” added Heaton. 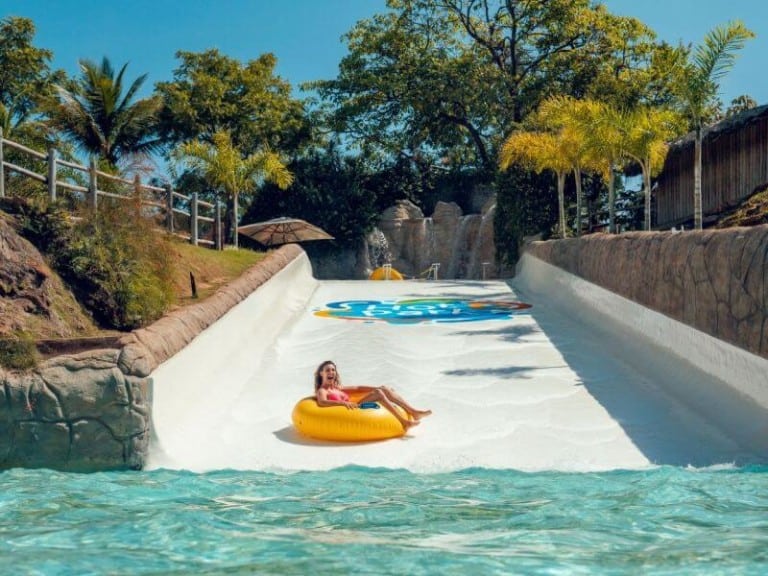 Hot Park can be found at the Rio Quente Resort, one of the biggest resorts in Brazil. The water park covers 55,000 square metres and also features an aviary with more than 200 birds. The resort offers other facilities, including F&B.

Located in the Cerrado, Rio Quente includes five hotels, bars and restaurants, and pools and attractions. Hot Park has more than 17 attractions in natural thermal waters. Thrilling rides include AeroBike and Xpirado while relaxing offerings include a lazy river. 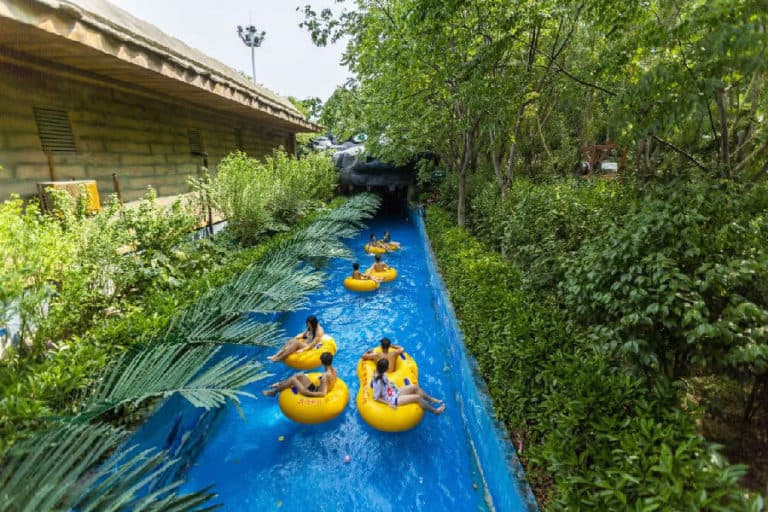 Fantawild has also water parks in Zhengzhou and Xiamen. Attractions on offer at Wuhu Fantawild Water Park include the Boonie Bear Village, a lazy river and a playground for children with water guns, floating bridges and water cannons. 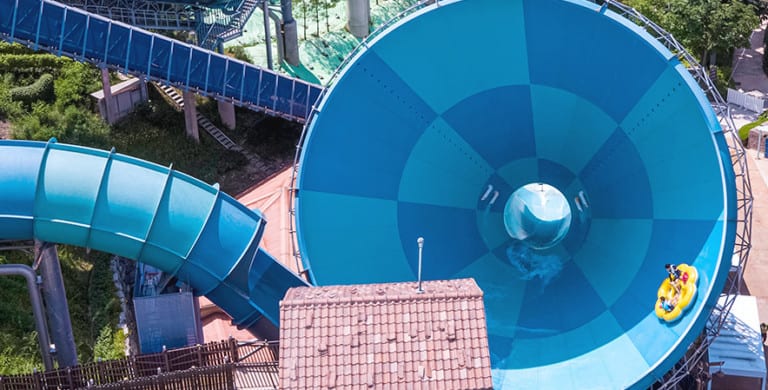 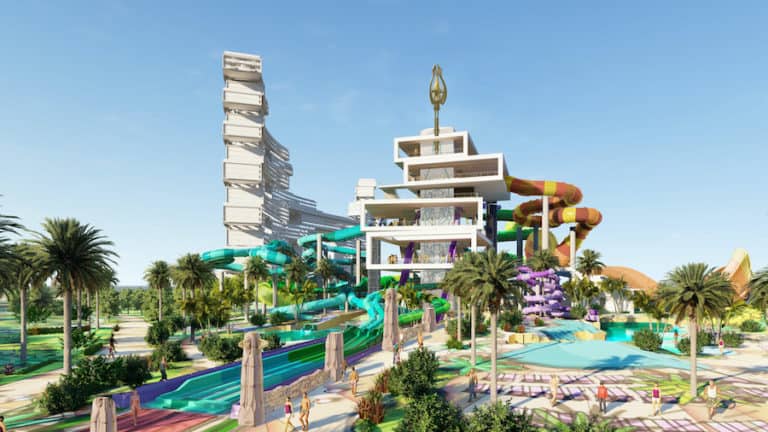 Aquaventure at Atlantis the Palm in the UAE features many world firsts as well as award-winning water rides. The water park is home to zip lines, slides racing through shark-filled lagoons and family-friendly offerings.

Kerzner International opened the second Atlantis Aquaventure water park on Dubai’s Palm Jumeirah in 2008. The first attraction launched on Paradise Island in the Bahamas, and the third opened in Sanya, China in 2018.

ProSlide Technology, an industry leader in water ride manufacturing and design, has provided 17 new water slides for phase three of the Atlantis Aquaventure expansion. The attraction is expanding by 30 percent.

“The water rides ProSlide installed are second-to-none and are the perfect complement for our vision for Atlantis to be among the world’s best water parks,” said Sascha Triemer, VP of marine and water park at Atlantis, Dubai.

“Their technology, innovation, and creative design have brought Atlantis to a completely new and higher level in the destination industry that could not have been achieved with any other water ride manufacturer.” 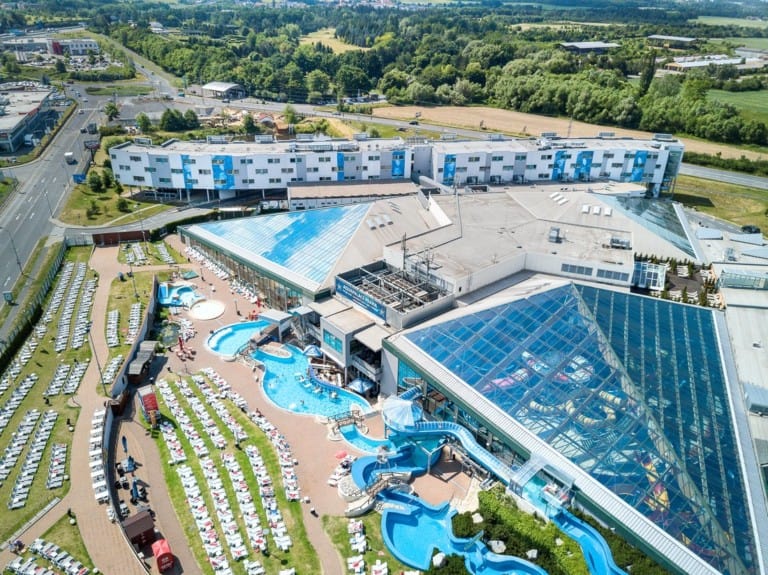 Aquapalace Prague, the only Czech entry on this list of the world’s top water parks, is the biggest water park in the Czech Republic. It is located in Čestlice and opened in 2008 and features connected indoor and outdoor areas. The main water park covers 9,150 square metres.

Attractions and rides include 12 water slides, one of which is the longest water slide in the Czech Republic.

The water park also features a winding river, artificial waves and pools at its three areas – Palace of Adventures, Palace of Relaxation and Palace of Treasures. Aquapalace also offers wellness facilities, such as saunas, baths and relaxation zones. 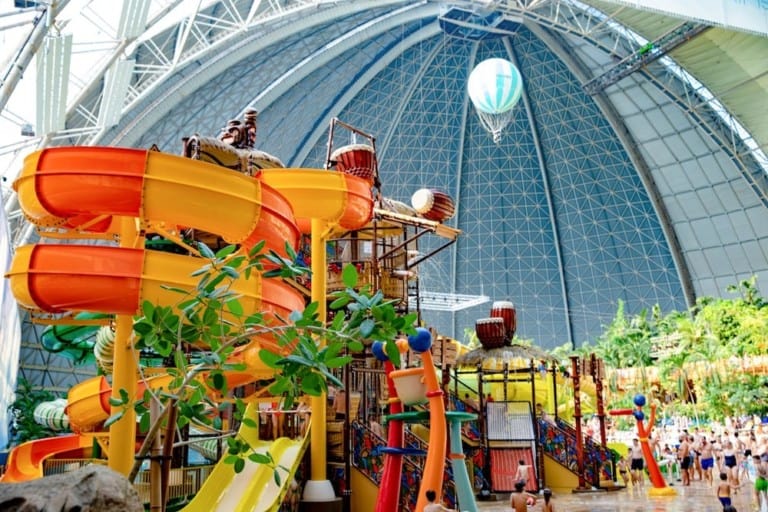 Parques Reunidos acquired Tropical Islands from Tanjong Plc for €226m back in 2018. Tropical Islands covers 650 hectares and is located inside a former zeppelin hangar near Brandenburg, close to Berlin, Dresden and Leipzig.

The water park can accommodate up to 8,200 visitors daily and boasts various attractions, including the highest waterslide tower in Germany. It opened in December 2004. In 2019, Tropical Islands added a giant water play structure from Polin Waterparks.

“Germany is a strategic market for Parques Reunidos,” said Richard Golding, chairman of Parques Reunidos. As well as representing a truly unique opportunity in itself, Tropical Islands also reinforces our market positioning in the country, where together with Movie Park and Belantis we will reach 3 million visitors.” 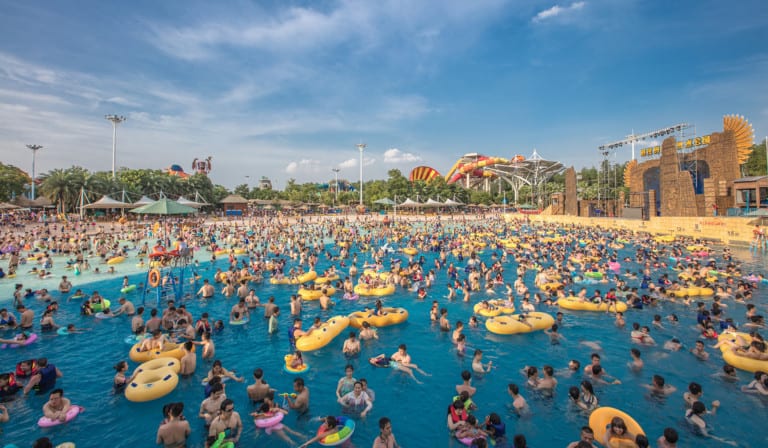 Wuhan Maya Beach Water Park is located in Hubei, a landlocked province in Central China. It made headlines in August last year when images emerged of crowds of visitors enjoying an electronic music festival. The park reopened in June amid the pandemic and was operating at 50 percent capacity (via The Independent). 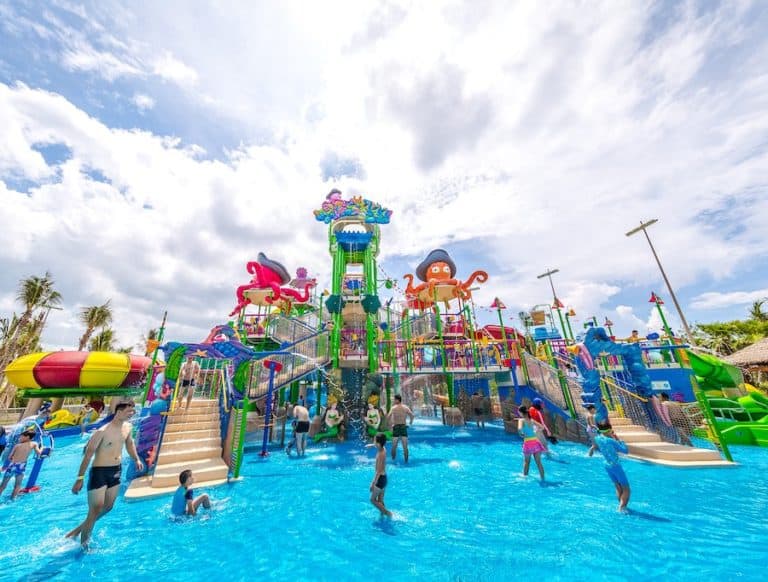 Aquaventure Atlantis in China has grown its attendance by 100 percent since it opened in May 2018. “It really is the world’s number one waterpark,” said Alan Mahony, vice president of Aquaventure at Atlantis Sanya. The $1.65bn attraction has 200,000 square metres of space and was built to a master plan from RAD Architecture.

Atlantis Aquaventure is the biggest waterpark in Asia. “Atlantis Sanya is the ultimate vacation destination in the region,” said ProSlide president and CEO Rick Hunter. “It delivers so many incredible guest experiences in one park experience.”

“We are not just concentrating on the waterslides – we are providing an immersive, interactive themed experience,” said Mahony. “You’ve seen Disney and Universal come into Asia, but we’re really the first internationally branded waterpark in the region.” 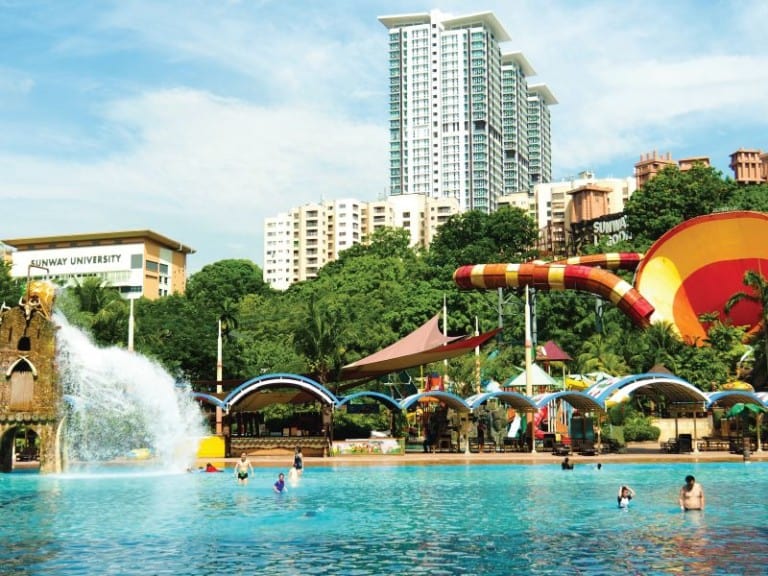 Attendance figures from this list of the world’s top water parks come from the TEA/AECOM Theme Index 2019, which can be downloaded here.