Opening on November 27, DreamWorks Water Park will feature an indoor and compact PerfectSwell, delivering authentic surf for any skill level.

Ahead of the opening, American Wave Machines has shared a video of professional surfers sampling the PerfectSwell pool at American Dream.

Pro surfers featured in the video, which you can watch below, include Rob Kelly, Cruz Dinofa, and Quincy Davis.

“Hats off to Gary Hanson [VP development, attractions at American Dream] and his epic team at Triple Five for imagining and then building the unimaginable,” Bruce McFarland, owner of American Wave Machines, told Blooloop.

The water park design “speaks to PerfectSwell scaleability and flexibility”.

American Wave Machines is the creator of PerfectSwell surf pools and surf lagoons – an authentic surf experience that can be enjoyed by more than 1,000 visitors at a time.

Surfing the new wave pool at @americandream this place is unreal!!! pic.twitter.com/gzdzyCBwlf

Speaking to Blooloop, Kelly said: “The wave pool at American Dream was really fun to surf and it was an awesome experience surfing indoors for the first time.

“Even scaled-down a bit to fit the smaller footprint of the pool inside the water park, PerfectSwell’s wave-generating technology definitely creates a fun and authentic surfing experience outside of the ocean.”

“PerfectSwell’s wave-generating technology definitely creates a fun and authentic surfing experience outside of the ocean.”

The company also creates SurfStream venues from 5,000 to 20,000 square feet. Since 2007, more than three million surf sessions have been enjoyed at American Wave Machines locations globally.

The immersive indoor DreamWorks Water Park will have more than 40 water slides and 15 attractions, including a lazy river, 1.5-acre wave pool, and the world’s tallest indoor body slide. 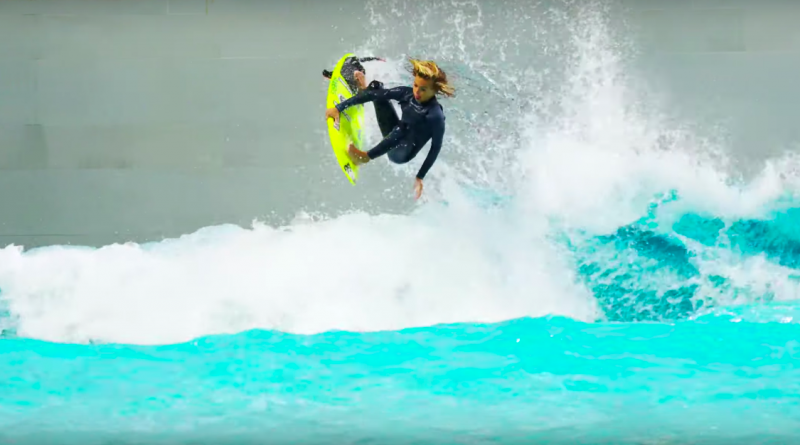 Kelly said that he and the other surfers who tested some of the first waves “had an absolute blast”.

“We spent the day catching hundreds of waves, doing airs and getting fun little barrels,” he added. “From professionals to beginners, being able surf indoors year-round is going to be epic for the surfers on the East Coast.”